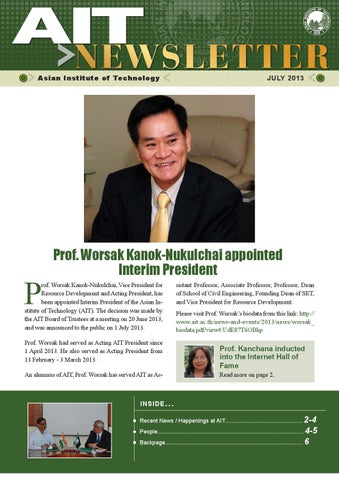 rof. Worsak Kanok-Nukulchai, Vice President for Resource Development and Acting President, has been appointed Interim President of the Asian Institute of Technology (AIT). The decision was made by the AIT Board of Trustees at a meeting on 20 June 2013, and was announced to the public on 1 July 2013.

Prof. Kanchana inducted into the Internet Hall of Fame Read more on page 2.

Thailand’s connection to the Internet started 25 years ago at AIT with “AIT.TH”

Twenty-five years ago, Thailand was connected to the Internet for the first time at AIT. In the late 1980s AIT was a key hub for the early development of the Internet in Thailand, and was the site of the country’s first email. In June 1988, AIT’s Professor Kanchana Kanchanasut successfully registered the Internet top-level domain name “.TH”, a move that ushered the country into the world of the nascent Internet. For the first time, email addresses were possible for members of the academic community in Thailand through dial-up accounts to “ait.th”. By mid-1988, Prof. Kanchana received authorization to oversee providing domain name registration services under “.TH”. The domain name was registered by AIT for an experimental network called the Thai Computer Science Network (TCSnet). Through the support of the Australian International Development Agency, ACSnet software enabled AIT to connect with Prince of Songkla University, Chulalongkorn University, and Thammasat University. The domain name registration task was jointly provided by AIT and Chulalongkorn University until 1999, when newly formed Thai Network Information Center Foundation (THNIC) took over. Today .TH remains the Internet country code top-level domain (ccTLD) for the country, and is administered by THNIC.

AIT to partner in UNEP’s Climate Technology Centre and Network AIT will partner in the UNEP-led Climate Technology Centre and Network (CTCN), which has been created following a meeting of the Governing Council of the United Nations Environment Programme (UNEP) held in February 2013. The consortium is led by UNEP and includes UN Industrial Development Organization (UNIDO), along with 11 international research and development bodies, including AIT. CTCN will be the im-

plementing arm of the Technology Mechanism of the UN Framework Convention on Climate Change (UNFCCC).

Discussing this and other modalities at the first Regional Expert Dialogue in Bangkok were AIT’s Dr. Shobhakar Dhakal and Dr. Kyoko Kusakabe. “AIT will be honored to be a partner and it offers an opportunity for the Institute to play a lead role in helping countries adopt new technology mechanisms,” Prof. Sivanappan Kumar, AIT’s Acting Vice President for Academic Affairs said. Prof. Kumar added CTCN has only two partners in Asia – AIT and TERI in India.

bodia, India, Nepal and Thailand. The program, is a part of the USAID program “The Agricultural Learning Exchange for Asian Regional Networking (AgLEARN).” The project also aims to establish a virtual ‘Centre of Excellence on Sustainable Agriculture Practices and Food Security’ at AIT with a multidisciplinary team of AIT researchers and partner institutions

capable for long-term contribution to enhance food security in the region. Prof. Gopal B. Thapa of RRDP is the principal investigator of the project, and other members of the project include Prof. Ganesh P. Shivakoti, Dr. Peeyush Soni, and Dr. Avishek Datta from ASE academic program.

SPS Global to offer scholarship and interships to AIT SPS Global Corporation, a company established by an alumnus of the Asian Institute of Technology (AIT), has announced the award of a scholarship of USD 8000 to a bright and needy student to pursue a Master’s program at AIT’s School of Environment, Resources and Development (SERD). The formal agreement to award

the scholarship was signed on 28 June 2013 by Managing Director of SPS Global Corporation, Dr. Soontorn Pironsartkoon, and the AIT Acting President, Prof. Worsak Kanok-Nukulchai. Besides the scholarship, the company is besides exploring internship opportunities for students of AIT’s School of Engineering and Technology (SET) and SERD.

AIT alumnus Prof. Yew-Chaye Loo made Member of the Order of Australia AIT alumnus and former seconded faculty member Professor YewChaye Loo of Griffith University, Australia, has Professor Yewbeen named to The Chaye Loo Queen’s Birthday 2013 Honours List and will be made a Member of the Order of Australia, one of his country’s highest civilian honours. Prof. Loo was named for his significant service to civil and structural engineering. Originally from Malaysia, Yew-Chaye Loo graduated from AIT in 1968 with a Master of Engineering in Structural Engineering and Construction from the School of Civil Engineering. Prof. Loo was also a Seconded Associate Professor to AIT from 1981-1984.

Scholarships and Fellowships available at AIT His Majesty the King’s Scholarships For students enrolling in any field of study offered at AIT to enhance professional training and international cooperation. Her Majesty the Queen’s Scholarships For students enrolling in any environment related field of study, to instill a consciousness of environmental resilience and awareness for the region. Loom Nam Khong Pijai The Loom Nam Khong Pijai Scholarships are granted by the Royal Thai Government in honor of HRH Princess Maha Chakri Sirindhorn. It

aims to assist human resource development in six GMS countries. New AIT Fellowship Scheme The New AIT Fellowship Scheme is intended to provide more opportunities for students from across the region to study at AIT. A new era is approaching with the coming ASEAN Economic Community (AEC) in 2015, and AIT aims to play a key role by developing the next generation of international engineers, scientists, and managers. For details visit: http://www.ait.ac.th/AIT/admissions/Current_Scholarships

Farewell Mr. Benjamin A. Gargabite, Coordinator, Admissions and Scholarships Unit, AIT passed away suddenly on 23 June 2013. An AIT alumnus, he completed his Master’s in Human Settlements Development in 1986.

Prior to assuming the position of Coordinator, he had also served as Admissions and Scholarships Officer. Mr. Gargabite joined AIT on 1 August 1987. He is survived by his loving wife Ms. Chuleeporn Tangritpranee. While expressing condolences on the unexpected passing of Mr. Gargabite, Acting President Prof. Worsak Kanok-Nukulchai said he was highly respected by all and described him as one of AIT’s most loyal employees.

ICANN Chairman commends intERLab’s work as “very impressive” Visiting AIT and Thailand for the first time, Chairman of the Board of Internet Coporation for Assigned Names and Numbers (ICANN), Dr. Steve Crocker, described the work done by AIT’s intERLab as “very impressive” and exciting. “The work and the training programs are wonderful,” the visionary Internet guru remarked during his visit to AIT on 5 June 2013. Meeting the Acting President Prof. Worsak Kanok-Nukulchai, he stated that Prof. Kanchana Kanchanasut was a “very highly regarded” person who was known throughout the world. Expressing admiration for Prof. Kanchana, AIT’s Acting Vice President for Research and the Director of the Internet Education and Research Laboratory (intERLab), Dr. Crocker also commended her team’s work at intERLab.

Dr. Crocker, who has been involved in the Internet since its inception, was part of the team that developed the protocols for the ARPANET and laid the foundation for today’s Internet. Dr. Crocker was accompanied by John Crain, ICANN’s Senior Director, Security, Stability and Resilience.

July 2013 edition of the monthly newsletter of the Asian Institute of Technology (AIT).

July 2013 edition of the monthly newsletter of the Asian Institute of Technology (AIT).