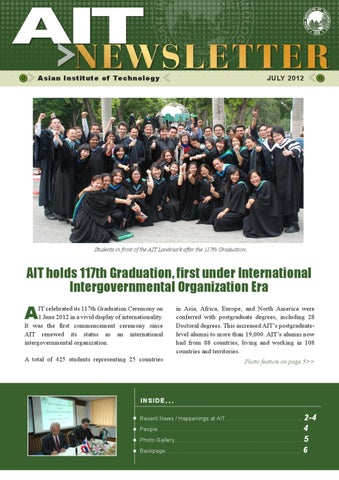 Students in front of the AIT Landmark after the 117th Graduation.

IT celebrated its 117th Graduation Ceremony on 1 June 2012 in a vivid display of internationality. It was the first commencement ceremony since AIT renewed its status as an international intergovernmental organization. A total of 425 students representing 25 countries

AIT supports Nakhon Nayok to be Thailand’s ‘Smart Province’ AIT has partnered with the Province of Nakhon Nayok to support its bid to become Thailand’s first “smart province” and intelligent community prototype for the fast-emerging ASEAN Economic Community (AEC) in 2015.

Signing a Memorandum of Understanding (MoU) on 26 June 2012 with AIT President Prof. Said Irandoust, Nakhon Nayok Governor, Dr. Surachai Srisaracam, said it was important for his province to utilize ICT to achieve sustainable development, and he was happy to have the contribution and involvement of AIT in the ambitious project. The AIT President remarked that Nakhon Nayok can be AIT’s second home in Thailand. He was responding to a generous overture made by Governor in May 2012 when he offered 100-rai site free of charge.

Twenty-two students from TimorLeste arrived at AIT to participate in the University Foundation Program. Recipients of a scholarship from the Human Capital Development Fund of Timor-Leste for pursuing post-graduate studies, they are participating in this bridging program jointly organized by the AIT Language Center and AIT Extension. After completion of the program all 22 students are expected to pursue their respective Master program in universities in and around Bangkok.

The opening ceremony on 19 June 2012 was attended by H. E. Mr. João Freitas Camara, Ambassador of Timor-Leste to Thailand, who, in his welcome remarks thanked AIT for hosting this program. The chosen subject areas of the students range from Teachers’ Training to Urban and Rural Planning and MBAs.

Int’l Professional Master’s Program in Urban Management in Vietnam AIT has introduced a new AIT International Professional Master’s Program in Urban Management (PM-UM) program, to be launched in September 2012. This is a joint-program between Urban Environmental Management (UEM) field of study, School of Environment, Resources and Development (SERD), AIT; University of Architecture of Ho Chi Minh City (HCMUARC), Vietnam, and AIT Vietnam. The program was unveiled at a seminar on “International Education for Urban Management Professionals in Vietnam” at the University of Architecture, Ho Chi Minh City, Vietnam.

Newest AIT Vietnam EMBA grads and others donate to SOM’s recovery At the recent 117th AIT Graduation Ceremony, the School of Management received a surprise group donation of 32,000 THB from some of its newest graduates – the 2012 Graduating Batch of AIT Vietnam’s EMBA program.The donation included individual pledges from 27 new graduates of the EMBA Dongnai Vietnam program. Each contributed between 1000-1700 THB to assist the School of Management’s flood recovery efforts.

Indian Institute of Crop Processing Technology ties up with AIT

Indian Institute of Crop Processing Technology (IICPT) has tied up with AIT to facilitate student and faculty mobility, and initiate joint academic and research programs. A Memorandum of Understanding (MoU) to facilitate these activities was signed on 25 June 2012 by Director, IICPT, Dr. K. Alagusundaram, and the AIT President, Prof. Said Irandoust. Dr. Alagusundaram, who is an AIT alumnus (Master’s in Agricultural and Food Engineering in 1985), also expressed the desire to launch a joint student exchange program.

Book by AIT faculty A book titled “Mainstreaming Human Security: Asian Perspectives” edited by a team including Dr. Philippe Doneys of the Gender and Development Studies (GDS) field of study Dr. Philippe Doneys at AIT’s School of Environment Resources and Development (SERD) has been released. Spanning 17 chapters, the book contains theoretical discussions and case studies from Asia. The book envisages a human security framework interpreted and situated in the Asian context. It examines how the concept, as defined by the UN Commissioners, has been integrated into existing structures of governance in the Asia Region. One of the chapters on Timor Leste was written by a recent GDS Doctoral graduate, Dr. Gabrielle Eva Carol Groves.

AIT President awarded for outstanding contribution to education AIT President Prof. Said Irandoust was honored at the First World Education Congress 2012 held at Mumbai, India. Prof. Irandoust was conferred the “Award for Outstanding Contribution to Education” by the Congress at Mumbai on 29 June 2012. The citation states that the leadership and contribution of Prof. Irandoust in the field of education is well known. “The position that you occupy in the fraternity is strategic and iconic. As a thinker and doer you are a role model and a believer in change,” the citation says. Thanking the organizers for honoring him with the award, Prof. Irandoust delivered an address on “The University in a Globalized World,” under the theme “New paradigms and models for Education.”

to read could cost up to £60m per year, according to an independent study commissioned by the government. Professor Dame Janet Finch, who led the work, said “open access” was the future for academic publishing and that the short-term transition costs she had identified should reduce over time as more articles became freely available and the journal subscription costs currently paid by university libraries fell.” http://www.guardian.co.uk/science/2012/jun/19/open-access-academicpublishing-finch-report Reuters (http://tiny.cc/6m4hgw)and BBC (http://tiny.cc/so4hgw) also followed the report closely. The entire report can be downloaded from this link: http://tiny.cc/np4hgw