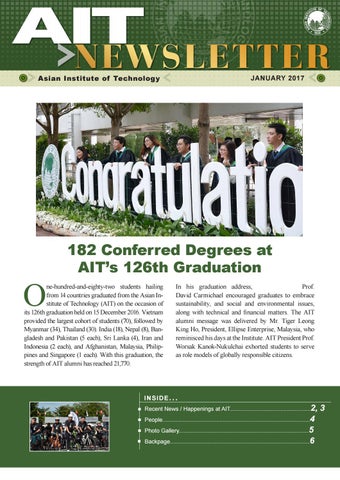 ne-hundred-and-eighty-two students hailing from 14 countries graduated from the Asian Institute of Technology (AIT) on the occasion of its 126th graduation held on 15 December 2016. Vietnam provided the largest cohort of students (70), followed by Myanmar (34), Thailand (30). India (18), Nepal (8), Bangladesh and Pakistan (5 each), Sri Lanka (4), Iran and Indonesia (2 each), and Afghanistan, Malaysia, Philippines and Singapore (1 each). With this graduation, the strength of AIT alumni has reached 21,770.

Kurita to grant three annual scholarships for five years Kurita Water and Environment Foundation (KWEF) will grant three full scholarships to pursue a Master’s degree program at AIT. The scholarship program will run every year for a period of five years. One scholarship each will be granted to a student in Water Engineering and Management (WEM), Environmental Engineering and Management (EEM); and Natural Resource Management (NRM). A Memorandum of Understanding (MoU) and a Memorandum of Agreement (MoA) finalizing the scholarship program were signed by KWEF President Mr. Hiroshi Saito, and AIT President Prof. Worsak Kanok-Nukulchai on 9 December 2016.

where students would talk while everyone else would listen.

Delivering his talk on the topic “Between Global and Local Challenges: Water Resources and their Management will Shape our Future,” Prof. Bogárdi outlined the ethical dimension of water-related issues, which are intertwined with technical, economic and social solutions.

India and Pakistan teams in the finals

The lush grounds of the Asian Institute of Technology (AIT) were host to Women’s Asia Cup Twenty20 tournament played from 25 November-4 December 2016, making history in the cricketing world in Thailand. The final match between India and Pakistan was telecast live, and Thailand became the first country to live telecast a game of Women’s Asia Cup. Six Asian teams — Bangladesh, India, Nepal, Pakistan, Sri Lanka, and Thailand, participated in the event. Led by Captain Harmanpreet Kaur, India defeated Pakistan in the finals by 17 runs and remained undefeated in the tournament. Mitali Raj of India was adjudged player of the match. This is India’s sixth consecutive victory in as many editions of the tournament. AIT students Hadi Hassan Khan was the venue manager.

NEW HEADS OF DEPARTMENTS Six faculty members have been appointed as Heads of newly constituted departments at AIT. This marks a major academic administrative restructuring of AIT schools. Three new departments each have been created at the School of Engineering and Technology (SET) and the School of Environment, Resources and Development (SERD). The School of Management (SOM) is in the process of revamping its programs. More details are available at this link: https://goo.gl/n6EoSk

Dr. Mongkol Ekpanyapong has been appointed the new Director of the Internet Education & Research Laboratory (intERLab). His appointment, which follows the completion of term of Prof. Kanchana Kanchanasut, was announced by AIT President Prof. Worsak Kanok-Nukulchai in an email to the AIT community. His appointment is concurrent to his current position as Associate Professor in the Department of Industrial Systems Engineering of the School of Engineering & Technology.

When AIT researchers designed a ‘Rice Bin’, the Bangkok World published this illustration.

January 2017 edition of the monthly newsletter of the Asian Institute of Technology (AIT).

January 2017 edition of the monthly newsletter of the Asian Institute of Technology (AIT).