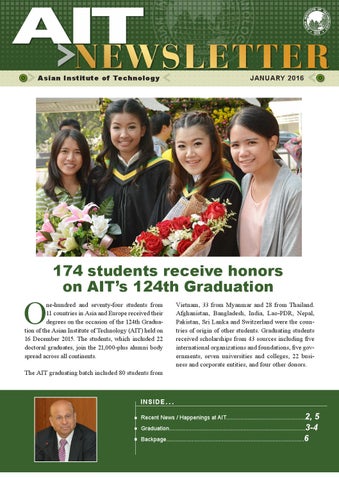 ne-hundred and seventy-four students from 11 countries in Asia and Europe received their degrees on the occasion of the 124th Graduation of the Asian Institute of Technology (AIT) held on 16 December 2015. The students, which included 22 doctoral graduates, join the 21,000-plus alumni body spread across all continents. The AIT graduating batch included 80 students from

Vietnam, 33 from Myanmar and 28 from Thailand. Afghanistan, Bangladesh, India, Lao-PDR, Nepal, Pakistan, Sri Lanka and Switzerland were the countries of origin of other students. Graduating students received scholarships from 43 sources including five international organizations and foundations, five governments, seven universities and colleges, 22 business and corporate entities, and four other donors.

GRADUATION ADDRESS Dr. Rafiul Ahad, Vice President, of Software Development at Oracle Corporation,US: Narrating his personal story as a stateless young man who could not get a job despite degrees and qualifications, a young Rafiul painted church walls and polished floors before he was introduced to AIT. “I am grateful to AIT for admitting me to the first batch of computer science in 1979, and also to the Royal Thai Government for granting me scholarship to study,” Dr. Ahad reminisced. Asking students to inculcate the spirit of risk-taking, the graduation speaker quoted four lessons from his life ̶ the ability to take risk, a passion for work, continuous acquisition of knowledge, and a work-life balance. Further, be fair to everyone and treat everyone with respect regardless of social status and stature, he added. http://goo.gl/y0Wf5u

Prof. Worsak Kanok-Nukulchai, President AIT: AIT President Prof. Worsak Kanok-Nukulchai reminded all students that “AIT has always taken pride in its important role in resolving transnational cross border challenges.” Mentioning the role played by AIT in the run-up to the Paris Climate Change Conference (COP21), Prof. Worsak stated that AIT will provide Asian solutions to Asian problems in relation to climate change, while using global knowledge. He asked students to maintain a strong association with their alma mater, and hoped that one day, they too would help AIT to continue its mission of serving future generations of world-class citizens.http://goo.gl/qvPwv6

AIT contributes to COP21 As 196 countries from all over the world signed the historic Paris Climate Change agreement, AIT has reasons to rejoice as it has been actively contributing towards the process. AIT was host to the Regional Forum on Climate Change (RFCC) along with French Ministry of Foreign Affairs and International Prof. Worsak Kanok-Nukulchai reading the Final Message Development, ASEAN Secretariduring RFCC. at, and the European Union (EU) from 1-3 July 2015, where 400 participants from 20 countries prepared a message for COP21. The message read out by AIT President Prof. Worsak Kanok-Nukulchai on the concluding day of the Conference made a “Final Call” for COP21. Prof. Mukand Singh Babel of AIT presented the key messages from RFCC at a UNEP event organized on 2 December 2015 at Paris. AIT’s Dr. Shobhakar Dhakal was widely quoted for his views on COP21 including 'The Economist.' His commentary was also published in a special Elsevier issue on “Climate change: A virtual special issue with commentary for #COP21.”

Lessons for Asean on the globalisation of education: Prof. Worsak Kanok-Nukulchai

AIT President Prof. Worsak Kanok-Nukulchai's Opinion piece titled "Lessons for ASEAN on the globalisation of education" was published in the Bangkok Post (22 December 2015). It can be read at this link: http://goo.gl/Gk6isw

January 2016 edition of the monthly newsletter of the Asian Institute of Technology (AIT).

January 2016 edition of the monthly newsletter of the Asian Institute of Technology (AIT).