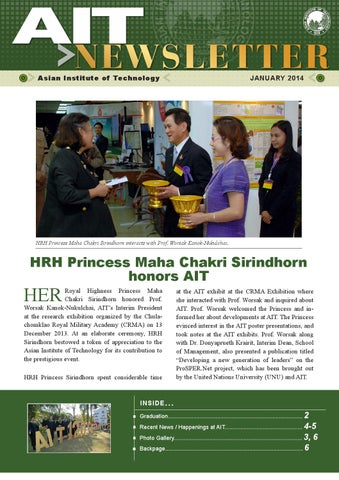 at the AIT exhibit at the CRMA Exhibition where she interacted with Prof. Worsak and inquired about AIT. Prof. Worsak welcomed the Princess and informed her about developments at AIT. The Princess evinced interest in the AIT poster presentations, and took notes at the AIT exhibits. Prof. Worsak along with Dr. Donyaprueth Krairit, Interim Dean, School of Management, also presented a publication titled “Developing a new generation of leaders” on the ProSPER.Net project, which has been brought out by the United Nations University (UNU) and AIT.

227 graduates from 19 countries graduate at AIT’s 120th graduation Two-hundred and twenty seven graduates coming from 19 countries and three continents graduated on the occasion of the 120th graduation of AIT on 17 December 2013. Out of the 227 who graduated, 109 graduates were from Vietnam, followed by Thailand with 45, Bangladesh with 14, Indonesia with 11, and India with 10 graduates. While the majority of gradates are from Asia; Europe was represented by one graduate each from Germany and The Netherlands; while Africa was represented by two graduates from Ethiopia, and one each from Nigeria and Tanzania. Ninety graduates came from AIT’s School of Engineering and Technology (SET); 80 from School of Management (SOM); 56 from School of Environment, Resources and Development (SERD), and one from SET-SERD.

Graduation Address: H.E. Dr. Sohail Khan, Ambassador of Pakistan to Thailand asked students to work for the public good. “Unlike the pundits of Silicon Valley, you should diversity into various ventures for public goods at H.E. Dr. Sohail Khan large,” the Ambassador said. He said: “The spirit of learning from the past while working in the present with a passion to transform our lifestyle in future should be your compass from today and onwards.” The Ambassador also asked AIT graduates to be proud of their alumni lineage and history, as they become brand Ambassadors of AIT wherever they go.

the AIT Student Union during his student days, has also served as the President of the AIT Alumni Association. Mr. Shrestha stated that the twenty-first century is focused on sustainable development and well-being, and is based on knowledge. Secondly, the world should no longer be viewed as a “West versus Rest” paradigm, since it is now looking towards Asia. Mr. Shrestha asked the graduands to focus on three elements for success -dreaming, persistence and optimism.

Presidential Remarks: Prof. Worsak Kanok-Nukulchai, Interim President, AIT mentioned that the Board of Trustees has embarked on preparing a roadmap for AIT, which will Prof. Worsak formulate clear objectives and Kanok-Nukulchai goals. The AIT Roadmap will provide the guiding post for the Institute to move forward, he added. Prof. Worsak highlighted five themes – food, energy, environment, infrastructure, and information and communication technologies as AIT’s future core focus areas. These are cross-border issues that confront every country in the region, he added. Prof. Worsak quoted the founding father of AIT, the late Prof. Milton E. Bender. Jr., who during his last visit to the Institute in 1993, had stressed the need for centers of excellence, and to respond to the needs of the people.

Outstanding Doctoral Graduate Message: The Most Outstanding Doctoral Graduate message was delivered by Ms. Nita Kuswardhani of School of Environment, ReMs. Nita sources and Development. She Kuswardhani remarked that her time at AIT had added more value to her life and also fortified her with bucketfuls of experience. She mentioned that working with different nationalities is an opportunity only few can enjoy.

Timor-Leste keen on partnership with AIT Timor-Leste is looking forward towards signing a formal agreement with AIT, and it considers AIT a premier institute that can help the country in strengthening its human capital resources. This was stated by Mr. Fracisco Dionisio Fernandes, Counsellor and Charge d’ Affaires of the Embassy of Timor-Leste, during his maiden visit to AIT on 12 December 2013. Mr. Fernandes stated that the number of scholars from Timor-Leste to AIT are set to increase. Mr. Paulino Henrique, Education Attache, who was accompanying Mr. Fernandes stated that AIT alumni are holding senior positions in Ministries and are considered as “pioneers” in their country. Currently 108 students from Timor-Leste

are studying in Thailand, and most of them have undergone a foundation course at AIT.

Nineteen new graduates of the AIT Professional Master’s in Banking and Finance (PMBF) Program for 2013 were recognized for their achievements at the Completion Ceremony on 7 December 2013. They included 10 Bangladeshi nationals, seven from Bhutan and two from Myanmar. The third graduating class of the PMBF pushes the total number of graduates to 66, including 46 bankers from Bangladesh Bank and 18 from the Bank of Bhutan, all of them being mid-level banking professionals. Those attending the ceremony included Mr. Karma W. Penjor, Chairman, Bank of Bhutan Ltd., Mr. Md. Ahsah Ullah, Executive Director, Bangladesh Bank; Mr. Kazi Russel Pervez, Counsellor, Embassy of Bangladesh, Bangkok; and Mr. Chitem Tenzin, Minister Counsellor, Royal Bhutanese Embassy.

AIT signed a Memorandum of Understanding (MoU) with the Korea Research Council of Fundamental Science and Technology (KRCF). The MoU was signed by Prof. Keon Kim, Chairman of KRCF and Prof. Worsak Kanok-Nukulchai, Interim President, AIT on 12 December 2013. Prof. Keon Kim, while signing the agreement, expressed his admiration for the research work and technology-driven programs in AIT. Prof. Keon Kim was accompanied by Ms Seoyoung Kim of the Division of International and Public Relations, KRCF.

Prof. Mukand Singh Babel has been appointed as Director of the Institute-wide Research Center for Sustainable Development in the Context of Climate Change (SDCC). Professor Babel will lead the team of five thematic leaders to achieve the goals of the AIT Research Strategy 20122016. The appointment is for a period of two years.

An alumnus of AIT, Mr. Preecha Ekkunagul has been appointed as President and CEO of Central Pattana Public Co.Ltd (CPN). His appointment was announced on 6 December 2013 after a meeting of the Board of Directors of CPN. An alumnus of Industrial Engineering and Management (IEM-1981), Mr. Preecha will assume his responsibility from 2 January 2014.

Huffington Post writes about the Qualities of a Global Citizen

Beyond Borders: What It Means to Be a Global Citizen “This global generation is very different from their 20th-century counterparts. Students need critical thinking skills, a level of self-awareness and confidence that will empower them to take on unfamiliar challenges. They need to be able to work on teams of diverse individuals, opinions and experiences. As they will most assuredly be faced with some of the world’s greatest challenges, they will need to ensure there are sustainable supplies of food, water, and energy; address the needs of more than seven billion people living on a planet with ever-dwindling natural resources. Whatever the challenge, they will need to innovate, work collaboratively and creatively, across borders and disciplines, and with ethics.” Read more: http://goo.gl/1CXvqO

January 2014 edition of the monthly newsletter of the Asian Institute of Technology (AIT).

January 2014 edition of the monthly newsletter of the Asian Institute of Technology (AIT).