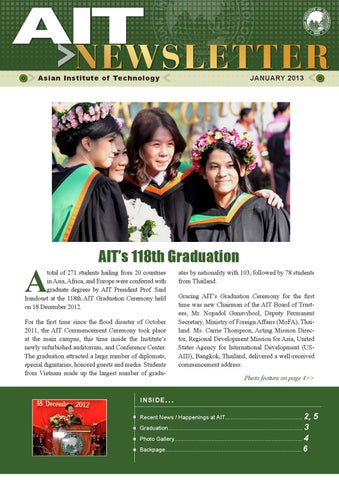 total of 271 students hailing from 20 countries in Asia, Africa, and Europe were conferred with graduate degrees by AIT President Prof. Said Irandoust at the 118th AIT Graduation Ceremony held on 18 December 2012. For the first time since the flood disaster of October 2011, the AIT Commencement Ceremony took place at the main campus, this time inside the Institute’s newly refurbished auditorium, and Conference Center. The graduation attracted a large number of diplomats, special dignitaries, honored guests and media. Students from Vietnam made up the largest number of gradu-

Well wishes to Her Royal Highness Princess Maha Chakri Sirindhorn AIT President Prof. Said Irandoust visited the King Chulalongkorn Memorial Hospital on 20 December 2012, where he paid his respects on behalf of AIT by signing a book of well wishes. As announced by the Royal Household Bureau, Her Prof. Said Irandoust at King ChulRoyal Highness Princess alongkorn Memorial Hospital. Maha Chakri Sirindhorn underwent a successful surgical removal of calcium deposits. HRH Princess Sirindhorn has long been associated with AIT and is a Royal Alumna, Honorary Faculty Member, as well as recipient of AIT’s Honorary Degree of Doctor of Technology. AIT wishes Her Royal Highness a speedy recovery.

Norway Ambassador hosts NMFA scholarship recipients from Myanmar Ambassador of Norway to Thailand, H.E. Ms. Katja Christina Nordgaard hosted 42 students from Myanmar at a reception organized at AIT on 3 December 2012. The students are recipients of Myanmar students with H.E. Ms. Katja the scholarship awarded by Christina Nordgaard. the Norwegian Ministry of Foreign Affairs (NMFA), and are studying at AIT in various Master’s and Doctoral programs. Addressing the students, the Ambassador described the event as a “great moment.” H.E. Ms. Nordgaard stated Norway is very pleased to support capacity building in Myanmar, and the international experience gained by students at AIT will contribute greatly towards this initiative.

Mr. Nopadol Gunavibool, Chairman of the AIT Board of Trustees and Deputy Permanent Secretary, Ministry of Foreign Affairs of Thailand stated that Thailand is proud to have hosted AIT since its inception in 1959. He was adressing the Institute’s 118th Graduation on 18 December 2012. He added that “AIT has a very unique mandate that transcends national boundaries, and is well positioned to work on pressing regional as well as global issues, for the benefit of peoples and communities.” The Board Chair added that he “felt privileged and honoured to have been invited to serve as Chairman of the AIT Board of Trustees in the transition period. I am delighted that the Ministry of Foreign Affairs has been able to work with members of the Board and representatives of sovereign states that have already ratified the new AIT Charter, in charting a way forward in a pragmatic manner.” The text of his speech can be read at this link: http://tiny.cc/ge83pw

Focus on the future, says AIT President AIT President Prof. Said Irandoust stressed the need for pragmatism and focusing on the future while delivering his Graduation address. The President added that “Now is a time, with the New Year soon upon us, to move forward. This is a time for moving forward and for Prof. Said Irandoust reconciliation and transition that would help put in additional steps for a stronger AIT – something now possible but only if people come together.” The President quoted words of wisdom and advice of His Majesty King Bhumibol Adulyadej: “I always believe that your compassion and good wishes to one another will be a significant factor in creating a unifying force in any group and also in the country. The most important thing is that there must be no conflicts. Support each other as is needed to achieve goals for the benefit of the people.” The entire text of his speech can be read at this link: http://tiny. cc/oq83pw

ess with entrepreneurial drive to solve serious developmental issues, she challenged AIT’s newest batch of scientists, managers, and engineers to do the same.

Most Outstanding Student, Mr. Viney Hora of AIT’s School of Management paid his gratitude to AIT while delivering his address. “I hope that as we all embark into a new chapter of our lives that choose that path makes our families, our advisors, our professors, and our Alma Mater, AIT, most proud, “ he said. The entire speech can be read at this link: http://tiny.cc/8y83pw

Entura Hydro Tasmania enters into partnership with AIT Entura Hydro Tasmania, a prominent energy group from Australia has entered into an agreement with AIT. The signing of the Memorandum of Understanding (MoU) between the two was finalized during the inauguration of Entura’s Clean Energy and Water Institute (CEWI) in Hobart, Australia held on 11 December 2012. Inaugurating CEWI, Tasmania’s Premier Ms. Lara Giddings expressed the desire of her government to connect more closely with its Asian neighbors and welcomed the collaboration between CEWI and AIT describing it as a positive development.

“AIT is an option for our central bank” In a strong signal to the growing regional stature of AIT’s nascent Professional Master’s in Banking and Finance (PMBF) Program, two of Asia’s senior most bankers graced the second Completion Ceremony of the program held on 15 December 2012, addressing diplomats, dignitaries, graduates and AIT officials in Bangkok.

Mr. Daw Tenzin, Governor of the Royal Monetary Authority of Bhutan (RMB) and Mr. Md. Ahsan Ullah, Executive Director of Bangladesh Bank, spoke on banking and finance perspectives as they witnessed 26 of their countrymen and women receive completion transcripts for their degree.

OCAJI signs MoA with AIT The Overseas Construction Association of Japan, Inc. (OCAJI) signed a Memorandum of Understanding (MoU) and a Memorandum of Agreement (MoA) with AIT on 14 December 2012, following which OCAJI will be sending employees of its member companies to study at AIT. They will enroll in Master’s program in Construction Engineering and Infrastructure Engineering (CEIM) at AIT’s School of Engineering and Technology (SET), besides enrolling in short term training courses. The MoU and MoA were signed by Mr. Toichi Takenaka, President, OCAJI and Mr. Hajime Suzuki, Executive Vice President, OCAJI respectively and wit-

It’s not Stonehenge – it’s the new “2011 Flood Memorial Garden” Perched atop a small mound to the side of the roadway leading to the AIT globe monument area is a curious new fixture to the campus. Vaguely similar to a collection of traditional Japanese “tori”, a number of tree logs set in a circle on the grassy knoll form the new “2011 Flood Memorial Garden” – an understated and tranquil reminder of what was AIT’s worst ever natural calamity. “Stonehenge in England was my inspiration,” says garden designer Mr. Kritsadakorn Thiagkhot, Chief Landscaper at Sodexo. The natural memorial uses trees fallen in the flood as a way to remind visitors of the interconnectedness of the cycle of life, and of the danger of cli-

Fate of New Year Resolutions as we wish you a Happy New Year Source: http://www.statisticbrain.com/new-years-resolution-statistics/

mate change run-amok. “Trees rank as first producer of the natural world’s ecosystems – if they die, we will die too,” he says wistfully.

Self Improvement or education (47%)

Type of Resolutions (Percent above 100% because of multiple resolutions)

People in their twenties (39%)

Length of Resolutions Others (47%)