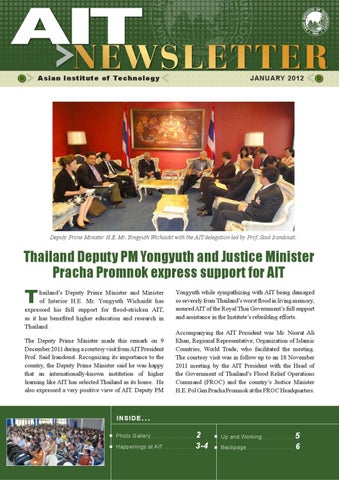 hailand’s Deputy Prime Minister and Minister of Interior H.E. Mr. Yongyuth Wichaidit has expressed his full support for flood-stricken AIT, as it has benefited higher education and research in Thailand. The Deputy Prime Minister made this remark on 9 December 2011 during a courtesy visit from AIT President Prof. Said Irandoust. Recognizing its importance to the country, the Deputy Prime Minister said he was happy that an internationally-known institution of higher learning like AIT has selected Thailand as its home. He also expressed a very positive view of AIT. Deputy PM

Yongyuth while sympathizing with AIT being damaged so severely from Thailand’s worst flood in living memory, assured AIT of the Royal Thai Government’s full support and assistance in the Institute’s rebuilding efforts. Accompanying the AIT President was Mr. Nusrat Ali Khan, Regional Representative, Organization of Islamic Countries, World Trade, who facilitated the meeting. The courtesy visit was in follow up to an 18 November 2011 meeting by the AIT President with the Head of the Government of Thailand’s Flood Relief Operations Command (FROC) and the country’s Justice Minister H.E. Pol Gen Pracha Promnok at the FROC Headquarters.

“Plan properly and rebuild safely” In the aftermath of an unprecedented disaster such as the flood that impacted AIT, experts say it’s best to plan recovery work thoroughly and without undue haste, to avoid unintended health and operational consequences. And given the damage to ground level infrastructure, a number of rebuilding analysts feel AIT can construct a new model campus that is more resilient to environmental threats, more in-tune with the tenets of sustainable living, and more equipped to ensure a viable future. This was the prevailing view of internal AIT and external officials attending the meet- Prof. Waheed Uddin ings of the AIT Main Campus Rebuilding and Upgrading Committee. The body was constituted by AIT President Said Irandoust to map out an implementation plan for AIT that will benefit the Institute now and into the foreseeable future. The Committee is also charged to minimize the impact and dislocation of AIT students.

AIT senior alumnus visits campus, appreciates recovery efforts A senior alumnus of the AIT, Prof. Waheed Uddin, visited the AIT temporary locations at Bangkok as well as Hua Hin and Cha-am and commended the efforts made by the Institute to recommence operations. “All of you have made great personal sacrifices to ensure that AIT returns back to normalcy once again,” Prof. Waheed told key administrative staff at the camp office at Silapakorn University in Cha-am. He complimented the Institute for relaunching academic classes and administrative operations. Prof. Waheed, who graduated from AIT with a Master’s degree in 1975, is a Professor in the Department of Civil Engineering, University of Mississipi, apart from being a Director, Center for Advanced Infrastructure Technology (CAIT). His experience can be read at the blog: http://infrastructureglobal.com/.

AIT is fully dry, power partially restored AIT’s mother campus has been officially declared as “fully dry.” The water level in the entire campus is now at normal level. Power has also been restored at

various places. This was announced by the AIT President Prof. Said Irandoust in a message sent to the community in his weekly letter. Clearing of debris, preliminary cleaning and spray of disinfectants has been completed in the academic buildings. The President stated that the two main electric pumps at the pump house have been fixed and are operating normally. He announced this after receiving updates from the AIT Main Campus Rehabilitation Committee chaired by Professor Worsak Kanok-Nukulchai, Vice President for Resource Development, and the respective Task Forces. The Committee will issue updates every Monday.

Japan’s University of Yamanashi has come to the aid of flood-stricken AIT by donating 1 million Yen to AIT’s relocation and recovery efforts and pledging to support the research activities of AIT students in need of facilities. The assistance was extended on 2 December 2011 by Prof. Futaba Kazama, who led a delegation to AIT that included Dr. Kei Nishida, Associate Professor, and Dr. Takeshi Nakamura, Assistant Professor. The Japanese visitors were welcomed to AIT’s Temporary Office at Chulalongkorn University by H.E. Dr. Tej Bunnag, Chairman of the Board of Trustees, AIT, and Prof. Said Irandoust, President, AIT.

AITAA (Japan) donates 2.6 million Yen The Japan Chapter of the AIT Alumni Association has come to aid of its alma mater with a substantial donation to support AIT’s post-flood work plans. Mr. Yoshiaki Shimura, President of AITAA Japan Chapter, handed over 2,660,000 Japanese Yen and 10,000 Baht to Prof. Worsak Kanok-Nukulchai, Vice President for Resource Development, while visiting the AIT Office in Bangkok on 7 December 2011. “As we enjoyed our life in the AIT campus as a student or faculty member, we wished to do something for AIT’s cleaning and rehabilitation,” Mr. Shimura explained. Welcoming Mr. Shimura to AIT on behalf of AIT President Prof. Said Irandoust, Prof. Worsak expressed his deep gratitude to the AITAA Japan Chapter and all of AIT’s

friends in Japan for its considerable generosity and support at this time of need. The AITAA Japan Chapter donation was the result of donations from Japanese alumni, Japanese former faculty members and non-Japanese AIT community members residing in Japan, Mr. Shimura said.

AIT organizes dengue control program for Pakistan partment (EPD), Government of Pakistan, thanked AIT for organizing a “remarkable” program encompassing not just various dimensions and elements of dengue control, but also organizing it at various locations along with multiple partners.

Inaugural function of DEPCAM A first of its kind Dengue Epidemic Prevention, Control and Management Program (DEPCAM) organized by the AIT Extension for 117 participants from Pakistan’s Punjab concluded at Bangkok on 23 December 2011. Speaking at the function, the Chef-de-Mission, Mr. Sajjad Saleem Hotiana, Secretary, Environment Protection De-

The program witnessed participation from 47 doctors, 19 nurses, 5 epidemiologists, 4 technicians, and 11 municipal officers. They were joined by 19 policy makers, including Parliamentarians, Permanent Secretaries of health, environment and local government, Director General of Health Services, Principals and Heads of teaching hospitals, journalists and representatives from NGOs.

AIT seminar presents lessons from the Thailand flood Experts from various streams suggested remedial measures and emphasized the need to learn lessons from the Thailand flood. At a seminar on “Lessons learned from the 2011 Thailand Flood Disaster and Future Directions for Flood Prevention and Mitigation,” organized by AIT and ASEAN Affairs AIT President at the seminar in association with the Center for Advanced Infrastructure Technology (CAIT), University of Mississippi, panelists stressed the need for knowledge sharing, capacity building, and preparedness. Prof. Said Irandoust, President, AIT, remarked that the lessons are relevant not only for Thailand, but also for other countries in Asia and beyond. Prof. Irandoust added that AIT never stopped working despite the flood, and the Institute was one of the first institutions of higher learning to restart academic activities. “We plan to rebuild AIT as a sustainable environmentally friendly campus that will act as a showcase for the rest of the world,” he added. AIT will continue to help in capacity building for flood protection, and plans to be a knowledge hub for sharing data pertaining to water management. Participants included Mr Swarup Roy, founder and CEO of ASEAN Affairs; Dr. Pornsak Suppataratarn, Technical Advisor (Flood Control Expert) TEAM Group of Company; Dr. Masahiko Nagai, Associate Director, Geoinformatic Center (GIC), AIT; and Dr. Waheed Uddin, Professor of Civil Engineering and Director, CAIT, University of Mississippi, USA and AIT alumnus (1975).

AIT has a non-binding MoU with Specialized Private Education Group AIT has signed a non-binding Memorandum of Understanding (MoU) with Laureate International Universities to explore a possible partnership. It was signed on 30 September 2011, and it is an exploratory MoU with no commitments, but merely an expression of interest to explore a partnership. This was stated by the AIT President Prof. Said Irandoust during the faculty forum organized at AIT’s temporary location at the Silpakorn University in Chaam on 15 December 2011. The President was responding to queries of AIT faculty members during the forum. During the forum, Dr. Peter Theisen, AIT’s external consultant for strategic planning, outlined AIT Online, undergraduate, satellite campus and professional programs as four potential income streams for AIT. He suggested strengthening marketing and sales, program and capacity optimization and campus upgrade to improve AIT’s bottom-line. Since AIT has already taken recourse to significant cost-cutting, it is not advisable to proceed on this path again, he suggested. He stated that within two months, the draft “roadmaps” for AIT, will be presentedfor input from AIT stakeholders.

Back to routine, it is time for examinations at AIT

After facing the brunt of the most severe inundation in its history, AIT students are back to taking tests and submitting assignments. Mid semester examinations for the undergraduate students, and some term-end examinations for graduate students began on 12 December 2011 at AIT’s temporary location at Hua Hin and Cha-am. The mid-term examinations for undergraduate students were earlier scheduled in the last week of October this year, the same time as the floods hit the AIT campus. Following the evacuation, which saw the students returning to their respective homes, examinations had to be postponed. Academic classes have resumed since 6 December 2011 and these students are now appearing in the mid-term examinations. The examination schedule includes all programs offered in the undergraduate stream including Electronics, Information and Communication Technology, Mechatronics, Telecommunications, Civil and Infrastructure, Computer Science, Industrial Engineering and Information Technology. Their final examination is slated to begin in the third week of January.

2012 to be the year of recovery, rebuilding, rejuvenation and reestablishment: President

Resumption of classes at AIT:

In the New Year message to the AIT community, the AIT President has described 2012 as the year of recovery, rebuilding, rejuvenation and reestablishment. The President said that while 2011 will go down in history as the toughest year in the history of the Asian Institute of Technology ever since it was founded, the community has much to look upto in 2012. By the end of January 2012, AIT will be re-established as an International Intergovernmental Institute. It shall be a unique institute of higher learning to have achieved this status. Despite the trauma of 2011, the year ahead promises to be a year of recovery, rebuilding and rejuvenation and reestablishment, he said. The entire message can be read at this link http://www.ait.ac.th/news-and-events/2011/news/2012-to-be-theyear-of-recovery-rebuilding-rejuvenation-and-reestablishment-president/