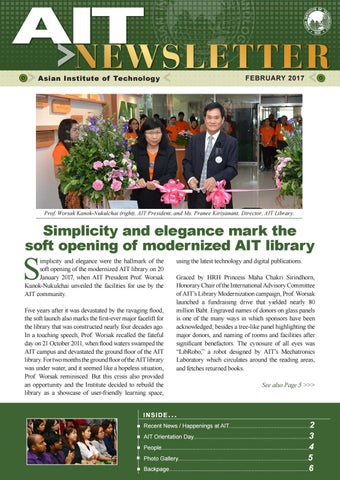 implicity and elegance were the hallmark of the soft opening of the modernized AIT library on 20 January 2017, when AIT President Prof. Worsak Kanok-Nukulchai unveiled the facilities for use by the AIT community. Five years after it was devastated by the ravaging flood, the soft launch also marks the first-ever major facelift for the library that was constructed nearly four decades ago. In a touching speech, Prof. Worsak recalled the fateful day on 21 October 2011, when flood waters swamped the AIT campus and devastated the ground floor of the AIT library. For two months the ground floor of the AIT library was under water, and it seemed like a hopeless situation, Prof. Worsak reminisced. But this crisis also provided an opportunity and the Institute decided to rebuild the library as a showcase of user-friendly learning space,

using the latest technology and digital publications. Graced by HRH Princess Maha Chakri Sirindhorn, Honorary Chair of the International Advisory Committee of AIT’s Library Modernization campaign, Prof. Worsak launched a fundraising drive that yielded nearly 80 million Baht. Engraved names of donors on glass panels is one of the many ways in which sponsors have been acknowledged; besides a tree-like panel highlighting the major donors, and naming of rooms and facilities after significant benefactors. The cynosure of all eyes was “LibRobo,” a robot designed by AIT’s Mechatronics Laboratory which circulates around the reading areas, and fetches returned books.

IDEA R&D Center and IDEA-EEM Laboratory established at AIT The concept of industrial partnership with academia came to fruition with the opening of IDEA R&D Center at AIT on 20 January 2017. The new “IDEA R&D Center” and “IDEA-EEM Laboratory” were formally inaugurated by Mr. Hideo Fukushima, Minister, Embassy of Japan in Thailand; Prof. Worsak KanokNukulchai, AIT President; and Dr. Toru Matsumura, Executive Director, IDEA Consultants. The laboratory has been established following a Memorandum of Understanding signed between AIT and IDEA — a premier Japanese integrated consulting firm dealing with environmental engineering and infrastructure issues. An initiative spearheaded by AIT’s Vice President for Administration, Prof. Kazuo Yamamoto, the venture also entails that IDEA will also second visiting researcher at the IDEA-AIT Lab. Inaguration ceremony of Laboratory.

AIT launches flagship innovation and leadership program for international students A new flagship international leadership and innovation camp aimed at creating global leaders has been launched by AIT. Focused on young students who exhibit leadership potential, the two-week long program seeks to emerge as a premier leadership camp for promising students from all over the world. The inaugural edition of the two-week program began on 16 January 2017 with students coming from six countries — Cambodia, Indonesia, Malaysia, Philippines, Vietnam, and host country Thailand. Supported by a grant from alumnus Tiger Leong, President, Ellipse Enterprise, Malaysia, the program provides an immersive experience with participants exposed to cutting-edge technology, new developments and trends, interactive sessions with leading global experts, and practical field experience. “AIT’s aim is to create global citizens,” President Worsak Kanok-Nukulchai told participating students at the launch event. Alumnus Tiger Leong described AIT as a very unique institute and credited his achievements to his days as a student at AIT. The camp was conducted by AIT Solutions. “Students immersed themselves in interdisciplinary topics after which they produced an innovative conceptual idea which was presented before

International orientation at display as fresh batch join AIT AIT’s international character was at display on the occasion of Orientation Day organized by the Institute on 6 January 2017, when 225 students hailing from 23 countries enrolled themselves for pursuing studies at Asia’s premier institute of higher education. Coming from all over the globe ranging from Colombia in South America to Timor-Leste in Southeast Asia, the new batch of AIT students were introduced to the myriad range of offerings at AIT. The largest cohort in the January 2017 semester comes from India, with 128 out of the 225 students joining the Unified International Bachelor-Master program. A little over quarter of the enrolled studies are female. India with 133 students is followed by Thailand (13), France and the Philippines (11 each), Pakistan (9), Nepal (7), Timor-Leste (5), Bangladesh, Myanmar and PR China (4 each), Afghanistan, Indonesia and Vietnam (3 each), Bhutan, Cambodia, Finland, Germany, and Sri Lanka (2 each), and Colombia, Lao PDR, Iran, Spain and Taiwan (1 each). South America, Europe, Asia and Africa are represented in this batch.

Dr. Salvatore G P Virdis has joined AIT’s School of Engineering and Technology (SET) as Assistant Professor. Prior to joining AIT, Dr. Virdis has served at the Centre of GeoTechnologies, University of Siena, Italy; Institute of Biometeorology of the Italian National Dr. Salvatore G P Virdis Research Council; and the University of Nottingham in Malaysia. Dr. Virdis obtained his Ph.D. from the University of Siena (Italy). He will be associated with Remote Sensing and GIS.

Dr Kuo-Chieh Chao ​​ D r. Kuo-Chieh (Geoff) Chao has joined the Department of Civil and Infrastructure Engineering in AIT’s SET as Associate Professor. Prior to joining AIT, Dr. Chao was serving as Vice President of Engineering Analytics Inc., a geotechnical and Dr Kuo-Chieh Chao environmental engineering consulting company in Fort Collins, Colorado, USA. Dr. Chao was an Adjunct Professor at Colorado State University, Fort Collins, Colorado, where he has taught foundation engineering in the Department of Civil and Geoenvironmental Engineering. He is the co-author of a textbook titled “Foundation Engineering for Expansive Soils.”

Dr. Tissa Illangasekare has been named as member of the Nuclear Waste Technical Review Board (NWTRB). He was among the 11 experts named by outgoing President Barack Obama on 6 January 2017 for key administration positions. Dr. Tissa is an AIT alumnus, and a member of the Institute Level Advisory Board (ILAB). A statement issued by the White House quoted President Obama: “I am pleased to announce that these experienced and committed individuals have decided to serve our country. I know they will serve the American people well.” The White House communiqué also mentions AIT in its statement.

Management from AIT. He received his Ph.D. in Environmental Engineering from the University of Illinois at UrbanChampaign (UIUC), USA. Prior to joining AIT, Dr. Ekbordin worked as an Emission Scientist at the Atmospheric and Environmental Research (AER), Inc., Massachusetts, USA, and as Assistant Environmental Engineer at Argonne National Laboratory, Illinois, USA.

Honoris Causa for Prof Worsak Kanok-Nukulchai AIT President Prof. Worsak Kanok-Nukulchai has been bestowed an Honorary Doctorate in Science (Honoris Causa) by Koneru Lakshmaiah University, Andhra Pradesh, India. He was awarded the honorary degree on the occasion of the Sixth Convocation of KL University. Also invited and honored at the same convocation was AIT’s Chairperson of Executive Committee, Dr. Sahas Bunditkul, in his capacity as former Prime Minister of Thailand. Led by Prof. Nitin Kumar Tripathi, Director, Special Degree Programs, KLU and AIT have signed a Memorandum of Understanding (MoU) to launch a 5-Year Integrated Program. KLU students will proceed to AIT after completing their undergraduate requirements in 3.5 years. Upon completion of 48 credits at AIT in 1.5 years, the students will receive Bachelor’s degree from KLU and Master’s degree from AIT, respectively.

If you have ever wondered who AIT’s first employee was, here is a “Blast from the Past.”

February 2017 edition of the monthly newsletter of the Asian Institute of Technology (AIT).

February 2017 edition of the monthly newsletter of the Asian Institute of Technology (AIT).