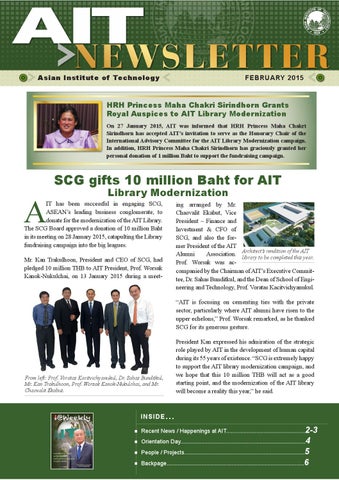 IT has been successful in engaging SCG, ASEAN’s leading business conglomerate, to donate for the modernization of the AIT Library. The SCG Board approved a donation of 10 million Baht in its meeting on 28 January 2015, catapulting the Library fundraising campaign into the big leagues. Mr. Kan Trakulhoon, President and CEO of SCG, had pledged 10 million THB to AIT President, Prof. Worsak Kanok-Nukulchai, on 13 January 2015 during a meet-

ing arranged by Mr. Chaovalit Ekabut, Vice President – Finance and Investment & CFO of SCG, and also the former President of the AIT Architect’s rendition of the AIT Alumni Association. library to be completed this year. Prof. Worsak was accompanied by the Chairman of AIT’s Executive Committee, Dr. Sahas Bunditkul, and the Dean of School of Engineering and Technology, Prof. Voratas Kacitvichyanukul. “AIT is focusing on cementing ties with the private sector, particularly where AIT alumni have risen to the upper echelons,” Prof. Worsak remarked, as he thanked SCG for its generous gesture.

President Kan expressed his admiration of the strategic role played by AIT in the development of human capital during its 55 years of existence. “SCG is extremely happy to support the AIT library modernization campaign, and we hope that this 10 million THB will act as a good starting point, and the modernization of the AIT library will become a reality this year,” he said.

Board Chairman featured on cover of @Weekly Chairman of the Board of Trustees of AIT, H.E. Dr. Subin Pinkayan, has been featured in the cover of @Weekly magazine, a popular Thai language publication of Post Today newspaper. Based on an interview conducted by the @Weekly team with Dr. Subin, the interview features the Board Chairman on the front cover and inside cover of the 20-26 December 2014 edition. Titled “To Support Leadership, Innovation and Serve as the Platform for Asian Cooperation,” the interview focused on Dr. Subin’s 5-year goal to steer AIT forward as a platform for international cooperation with a focus on benefiting Thailand and the Asian region. Dr. Subin stated that AIT “maintains a politically neutral status, and is considered as an independent non-profit organization. At present, the institute has approximately 2,000 Master’s and Doctoral students, with 70 per cent being foreign (non-Thai) students. AIT is likely the only educational institute in the world with such a large proportion of foreign students,” he said. The entire interview (in Thai) can be downloaded from this link: http://goo.gl/ICvxYQ An English version is available at this link: http://goo.gl/K7MuBP

New Year’s Message from AIT President AIT President Prof. Worsak Kanok-Nukulchai sent a New Year’s message to the AIT community. Prof. Worsak stated that while 2014 had been a year of “reflection, restraint and rehabilitation, 2015 will be a transformative year for AIT.” While expressing his gratitude to “the Board of Trustees and all its Committees,” Prof. Worsak stated that “as we start 2015, you will be delighted to know that the financial forecast at the end of 2014 has shown signs of sharp recovery. We are now moving in the right direction, with renewed strength and vigor.” He highlighted how AIT had regained the trust of its partners, and was moving towards a greater diversification of its funding sources to complement the existing donor-driven model. The Library Modernization Plan and the campus rebuilding was highlighted in the New Year’s Message.

AIT’s MBA programs ranked among global leaders, tops in Thailand AIT’s Master’s of Business Administration (MBA) programs have once again been ranked among top global programs. The latest rankings released by Eduniversal has placed three of AIT’s programs among the top 100 in the world, and five programs have been ranked among the top 20 in ‘Far East Asia’. All eight AIT programs are rated as the best in Thailand, and one program is rated among the top 20 worldwide. AIT’s Master of Agribusiness Management, which is jointly offered by the School of Environment, Resources and Development (SERD) and the School of Management (SOM) breaks into the top 20 programs worldwide in the category of Agribusiness and Food

The International Integrated Master’s Degree Program at AIT got off to a flying start with the first batch of 55 students from the Jawaharlal Nehru Technological University, Kakinada (Andhra Pradesh, India) arriving at AIT.

Indian Ambassador to Thailand, H. E. Mr. Harsh Vardhan Shringla, who met the students on 15 January 2015, remarked that the international exposure provided by AIT will help students engage with the global community. In another event organized the following day H.E. Dr. Sahas Bunditkul, Chairman of AIT Executive Council, and AIT President Prof. Worsak Kanok-Nukulchai congratulated the new students for their entry into AIT. “AIT is known for its academics and research, and the Institute provides a tremendous learning opportunity for students,” Dr. Sahas said.

Industry Management. The MBA program offered by SOM is also a global leader being rated 53rd in Entrepreneurship, and 54th in Sustainable Development and Environmental Management.

Next to India, Thailand, France, Bangladesh and Myanmar are the other top countries of origin of the new students. At the Orientation program held

on 6 January 2014, Prof. Sivanappan Kumar, Vice President for Academic Affairs, AIT, stated that since its inception, AIT has remained committed to building capacity among young professionals. â&#x20AC;&#x153;You are joining AIT during momentous times, since the Asia-Pacific region is expected to be a leader in the 21st century,â&#x20AC;? Prof. Kumar remarked. He urged students to build interpersonal and leadership skills at AIT, along with satiating their quest for knowledge.

Gates foundation grants FSM toolbox project to AIT AIT is the recipient of the Bill and Melinda Gates Foundation grant of $737,160 on preparing and disseminating a Fecal Sludge Management (FSM) Toolkit for Investors, Planners and Consultants. “The overarching objective of this project is to enhance capability of key players such as donor and investors, city planners, utility administrators and consultants, in development of FSM projects and businesses with competency preparatory tools and resources,” Dr. Thammarat Koottatep, Principal Investigator of the project, remarked at the meeting of the project advisory panel in Hanoi,

Vietnam on 18 January 2015. Spanning the continents of Asia and Africa, the project will cover Thailand, Vietnam, India, Bangladesh, Senegal, and South Africa. This is in addition to the “Sustainable Decentralized Wastewater Management in Developing Countries” project being implemented by AIT for the Bill and Melinda Gates Foundation.

To be completed over three years (2015 – 2017), the project is led by WEM’s Prof. Mukand S. Babel, and includes Dr. Oleg Shipin of Environmental Engineering and Management, and Dr. Sangam Shrestha and Dr. Victor R. Shinde, both of WEM. The objective of this project is to develop an indicator system to monitor and evaluate river health in the Mekong River Basin (MRB), and demonstrate its application in a selected catchment which is the Songkhram area of Thailand.

Dr. Sangam Shrestha of School of Engineering and Technology (SET) has been promoted to the rank of Associate Professor. His elevation from Assistant Professor to Associate Professor was announced by AIT President Prof. Worsak Kanok-Nukulchai following the recommendations of the Faculty Evaluation Panel (FEP) and the SET Faculty Evaluation Committee. Dr. Shrestha joined AIT as an Assistant Professor in November 2009. He obtained his Ph.D. in Integrated River Basin Management (IRBM), from the University of Yamanashi, Japan, in 2007 and his M.Sc. in Integrated Water Resources Management (IWRM), from AIT in 2004. Dr. Shrestha also gained his M.Sc. in Agriculture from the Institute of Agriculture and Animal Science, Tribhuvan University, Nepal in 2002. Dr. Shrestha’s research encompasses the areas of climate change and adaptation, integrated water resources management, hydrology and water quality modeling, groundwater development and management, and sustainable water management policy.

the first time in AIT’s history that a scholarship is earmarked for an American citizen. The announcement was made by Thai Pipe Managing Director and AIT alumnus Dr. Yanyong Phataralaoha (Ph.D. AIT, 1986), on August 28. Himself a VMI bachelor’s degree graduate, Dr. Yangyong was joined by a delegation of Royal Thai Armed Forces (RTAF) senior officers who are all fellow alumni of VMI. AIT President Prof. Worsak Kanok-Nukulchai welcomed Dr. Yanyong and the alumni delegation led by Gen. Surapong Suwanaadth, Deputy Chief of Joint Staff of Royal Thai Armed Forces (RTAF) and the Board Chair of Telephone Organization of Thailand (TOT). Gen. Surapong is the President of Thailand’s Virginia Military Institute (VMI) Alumni Chapter. Accompanying them were five other RTAF senior officers, who are alumni of VMI, and Mr. Scott Bradley, a visiting VMI alumnus from the United States.

AIT Open House An AIT Open House for prospective students will be organized at the Asian Institute of Technology (AIT) on 6 February 2014 from 10:00 am onwards. Prospective students, their families and friends can visit AIT, and its three schools ̶ School of Engineering and Technology (SET), School of Environment, Resources and Development (SERD), and School of Management (SOM), to inquire about admission requirements, scholarships and fellowships, and inquire about academics, research, life at AIT. More details are available at this link: http://www.ait.ac.th/news-and-events/2015/events/ait-open-house/#.VMsNktKUeSo

February 2015 edition of the monthly newsletter of the Asian Institute of Technology (AIT), Thailand.

February 2015 edition of the monthly newsletter of the Asian Institute of Technology (AIT), Thailand.