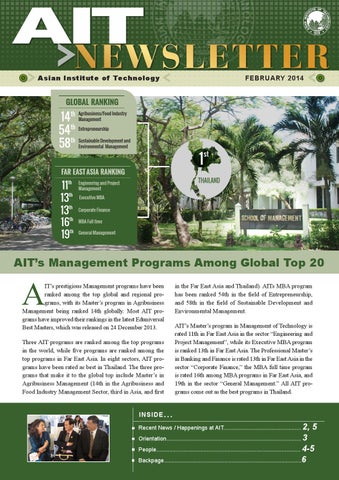 IT’s prestigious Management programs have been ranked among the top global and regional programs, with its Master’s program in Agribusiness Management being ranked 14th globally. Most AIT programs have improved their rankings in the latest Eduniversal Best Masters, which was released on 24 December 2013.

The Norwegian Ministry of Foreign Affairs (NMFA) unveiled its third tranche of scholarships for students from Myanmar to study at AIT. In an elegant ceremony organized at the Royal Norwegian Embassy at Yangon on 30 January 2014, the Ambassador of the Norway, H.E. Ms. Anne Ollestad, announced the commencement of scholarships for Myanmar students to undertake postgraduate studies at AIT. The Ambassador remarked that education is the key to development in Myanmar, and AIT has an important role to play in offering knowledge and skills to students from Myanmar. “I am hopeful and confident that the students awarded scholarships through the program will return to Myanmar after their studies where their knowledge and competence is best suited, be it within the Government or in a private business,” the Ambassador said in her brief remarks. Later, the Norwegian Ambassador; H.E. Dr. Sahas Bunditkul, former Deputy Prime Minister of Thailand and member of AIT’s Board of Trustees; and Prof. Worsak Kanok-Nukulchai, Interim President, AIT addressed a press conference.

The Alliance for Global Sustainability (AGS) will establish a strong network in the region, help in obtaining faculty secondments and student scholarships, besides helping strengthen the AIT brand, Prof. Yamamoto said. AGS is an international partnership between four of the world’s leading science and technology universities – ETH Zurich, MIT, The University of Tokyo, and Chalmers University of Technology. Since its creation in 1997, the AGS has drawn on the strength of its partners to develop capacity and new models for integrated research, education and outreach. Prof. Yamamoto stated that AGS Asia) will link with AGS, but it will be based in AIT, and it will network with Asian academic and research institutions, governments and industry. Prof. Yamamoto, who has worked as the Secretary of AGS when it was established, added that he was in consultation with his colleagues at the University of Tokyo about AGS Asia, and that they had agreed to extend the concept to AIT.

Prof. Yamamoto appointed Interim Vice President for Resource Development Prof. Kazuo Yamamoto has been appointed as Interim Vice President for Resource Development at AIT. His appointment was approved at the meeting of the AIT Board of Trustees held on 16 January 2014. The appointment shall be effective from 1 January 2014 to 31 December 2014. Professor Yamamoto will be partially seconded to this position by the University of Tokyo.

Students from 15 countries join AIT’s January 2014 batch Fifty-six students from 15 countries have joined AIT in the January 2014 batch. Welcoming them at the Orientation program held on 7 January 2014, AIT’s Interim Vice President for Academic Affairs, Prof. Sivanappan Kumar offered them felicitations on behalf of the Institute. Stating that AIT is committed to the Sustainable Development of the Asia-Pacific region, Prof. Kumar exhorted the students to avail of the myriad range of educational, research and outreach programs at the Institute. “The success of AIT is measured by the accomplishment of its students,” Prof. Kumar said,

as he enumerated the accomplishments of the Institute’s illustrious alumni. He suggested that besides academics, students should get involved in numerous activities such as “Greening of the AIT campus.” The Vice President for Academic Affairs also urged students to maintain high standards of ethical conduct. He asked students to get acquainted with the AIT faculty to make the most of the immense opportunities offered by the Institute. Prof. Kumar remarked that research and outreach are strengths of AIT, and hoped that students will find the Institute “exciting, rewarding and stimulating.”

Dr. Surachet Pravinvongvuth has joined as Assistant Professor in the field of Transportation Engineering (TRE) in AIT’s School of Engineering and Technology (SET).

Dr. Surachet completed his Ph.D. in Transportation Systems Engineering from Utah State University in 2007. He obtained his master degree from AIT, in the field of Infrastructure Planning and Management in 2001, and Bachelor’s in Civil Engineering from Chulalongkorn University in 1999. Dr. Surachet is an expert in the area of transportation planning and traffic engineering, with a proven track record in researching, consulting, managing, and teaching; in both public and private sectors. Prior to joining AIT, he was the Chief of Transport System Research and Development Section at the Expressway Authority of Thailand.

Food and Agriculture Organization (FAO) and AIT have signed a Memorandum of Understanding (MoU) to develop innovative approaches in research, education and capacity building in the field of food and agriculture. The MoU was signed by Mr. Hiroyuki Konuma, Assistance Director-General and Regional Representative for Asia and the Pacific, and Prof. Worsak Kanok-Nukulchai, Interim President, Asian Institute of Technology (AIT), at FAO’s Regional Office for Asia and the Pacific on 10 January 2013. Stating that AIT is one of the most important institutions which deals with regional issues, Mr. Konuma remarked that the role played by AIT is “very highly recognized.”

Passing Away Mr. Bernardo Gadlan, Administrative and Finance Officer, Media and Communications Unit (MCU) passed away at the age of 52. Fondly known as “Bernie”, he served as a point person for MCU dealing with faculty, staff, stuMr. Bernardo Gadlan dents, administration and external clients. A condolence meeting was organized in Mr. Gadlan’s memory at AIT on 14 January 2014 which was attended by senior AIT officials. Bernie’s funeral ceremony was held on 21 January 2014 at Rangsit-Klong Si Methodist Church and Crematorium.

Board Chairman outlines AIT Road Map A full-day session of AIT’s faculty and staff deliberated on the AIT Institutional Road Map, which was organized under the aegis of the Chairman of AIT Board of Trustees, H.E. Dr. Subin Pinkayan. “The AIT Road Map is an operational guideline for 2014-2018,” Dr. Subin remarked at the beginning of the workshop held on 22 January 2013 at the AIT Conference Center. The AIT Road Map, which was approved at the meeting of the AIT Board of Trustees held on 16 January 2014, was presented to the AIT community, which began its deliberations on operationalizing an action plan. “I identify myself as a member of the AIT community and I have come to work with you,” is how the Board Chairman described the day’s workshop. Welcom-

ing Dr. Subin, AIT’s Interim President Prof. Worsak Kanok-Nukulchai remarked that this was the first time that the Board Chairman has come down to work with the entire AIT community.

Making Education Work “Classrooms have had computers for decades, but in the past few years the buzz about “education technBBC quotes a report titled “Making Education Work” to say that “England’s education system is failing to meet the country’s long-term economic needs and requires a radical overhaul.

It says: “A group of academics and business leaders says a new cross-party body should set long-term educational goals protected from the electoral cycle. They also want more emphasis on team working and problem-solving, and a baccalaureate system at A-level.” Read more: http://www.bbc.co.uk/news/education-25881774

February 2014 edition of the monthly newsletter of the Asian Institute of Technology (AIT), Thailand.

February 2014 edition of the monthly newsletter of the Asian Institute of Technology (AIT), Thailand.