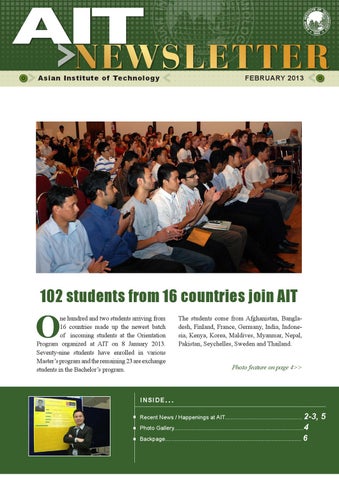 AIT School of Management Masters and MBA programs rank high regionally & globally Several AIT School of Management graduate degree programs are near the top of regional and global tables, according to a newly released Eduniversal Ranking of the world’s Best Masters and MBA programs. In the 2012-2013 ranking of the best 4000 Masters and MBA Programs in 30 specializations at 1000 business schools and universities in 154 countries, a number of School of Management (SOM) programs ranked high globally. Master of Agribusiness Management, Professional Masters in Corporate Social Responsibility, Master of Business Administration (MBA), Professional Masters in Technology Management, Professional Masters in Banking and Finance and Executive Master of Business Administration (EMBA) all were ranked highly. Details are available at this link: http://tiny.cc/2x4qrw

Building on principles of environmental policy and nature conservation, the concept of Earth System Governance puts them into a broader context of humaninduced transformations of the entire earth system. Elaborating on Earth System Governance was Mr. Ruben Zondervan, its Executive Director, in a talk delivered at the Asian Institute of Technology (AIT) on 18 January 2012. Issues of architecture of Earth System Governance, agencies, ‘adaptiveness’ of the mechanisms, accountability, and allocation and access form the core of the research framework. This 10-year research program has nine research centers, and the International Project Office is located at the Lund University Centre for Sustainable Studies (LUCSUS), Lund University, Sweden.

University of Tuscia, Italy, and Environmental and Economic Research Institute (EERi), Myanmar have signed an agreement with AIT to implement a community development program titled â&#x20AC;&#x153;Development of Rural Aquaculture through Entrepreneurship in Women in Myanmar.â&#x20AC;? The inception meeting was held at Yangon on 10 January 2013, where Chief Minister of Yangon, H.E. Mr. U Myint Swe, inaugurated a one-day seminar, which was attended by the Ambassador of Italy to Myanmar, H.E..Mr. Paolo Andrea Bartorelli.

TUST seeks partnership with AIT, offers summer scholarships for students Tianjin University of Science and Technology (TUST), China has expressed its desire to foster a partnership with AIT. The University is keen to strengthen its international research collaboration, and can offer summer scholarships to students from AIT. This sentiment was expressed by a delegation of TUST comprising of Prof. Wang Xuehui, Vice President for Research and International Education; Prof. W U Zhenjun, Director of Office of International Exchanges; and Prof Meng Chao, Dean of College of Arts, during their visit to AIT on 22 January 2013.

AIT alumnus receives Giuseppe Pellizzi International Best PhD award Dr. Parish Nalavade, an alumnus of AIT has been honored for his doctoral work, which he concluded at AIT. Dr. Parish was awarded the third prize in the inaugural edition of the “Giuseppe Pellizzi International Best PhD Prize” during the twenty-third annual meeting of the Club of Bologna.

With construction of conventional satellites being costly and challenging, the concept of microsatellites is picking up globally. Micro-satellites offer the benefits of low cost and customized on-demand operational parameters. Presenting micro-satellite technology and the concept of an Asian Microsatellite Consortium (AMC) was Dr. Yukihiro Takahashi, Director of Space Mission Center, and Department of Cosmosciences, Hokkaido University, during a visit to AIT on 22 January 2013. Dr. Takahashi said that the superconstellation of micro satellites could scan any location in the world within seven and a half minutes. He also offered that students from AIT could work at Hokkaido University on the project.

SOM alumnus wins Emerald / EFMD Award AIT alumnus Dr. Assadej Vanichchinchai has won the 2012 Emerald/ EFMD Outstanding Doctoral Research Award in the category of Operations and Production Management for his doctoral research on “The Relationship between Quality Management and Supply Chain Management: An Analysis of the Automotive Industry in Thailand”. Dr. Assadej earned a doctorate (Doctor of Philosophy 2009) from the AIT School of Management (SOM).

Prospectus 2012-2013 describes over 1000 courses at AIT Just in time for student recruitment season, Prospectus 2012-2013 is a new AIT publication unveiled to the public by the Media and Communications Unit (MCU). The 315-page book contains codes and descriptions for more than 1000 courses offered at over 75 Fields of Study and Academic Programs at the Asian Institute of Technology. AIT Prospectus 2012-13 is designed to assist prospective students interested in applying to AIT. It contains general introductions to all Fields of Study at AIT’s three Schools and International Undergraduate Programs, and consolidates information on application procedures and eligibility requirements. Descriptions of preferred backgrounds for applicants, as well as typical study plans for Master’s and Doctoral students, are included in the Field of Study sections. The document can be downloaded at this link: http://www.ait.asia/news-and-events/publications/ait_prospectus2012.pdf

Top papers of 2012 in Social Media Your paper is quoted in the academia, but what about the social media? Nature points out that “One of the promises of altmetrics — an approach to measuring attention on research papers that relies on alternative measures to citations, such as downloads, social media mentions and collections in online libraries — is that it could provide an almost real-time view of the papers provoking most excitement. Citations, by contrast, are inevitably slow to gather pace.” The top paper was on biological impacts of the Fukushima nuclear accident which had 2,142 people tweeting; 9 on blogs; 3 reddit posts; 131 Facebook posts and 9 G+ direct links). Read more at this link: http://blogs.nature.com/news/2012/12/what-were-the-toppapers-of-2012-on-social-media.html

February 2013 edition of the monthly newsletter of the Asian Institute of Technology (AIT).

February 2013 edition of the monthly newsletter of the Asian Institute of Technology (AIT).