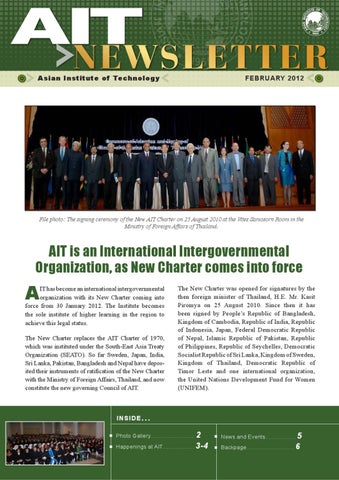 File photo: The signing ceremony of the New AIT Charter on 25 August 2010 at the Vites Samosorn Room in the Ministry of Foreign Affairs of Thailand.

AIT is an International Intergovernmental Organization, as New Charter comes into force

IT has become an international intergovernmental organization with its New Charter coming into force from 30 January 2012. The Institute becomes the sole institute of higher learning in the region to achieve this legal status. The New Charter replaces the AIT Charter of 1970, which was instituted under the South-East Asia Treaty Organization (SEATO). So far Sweden, Japan, India, Sri Lanka, Pakistan, Bangladesh and Nepal have deposited their instruments of ratification of the New Charter with the Ministry of Foreign Affairs, Thailand, and now constitute the new governing Council of AIT.

Thailand cabinet approves new AIT Charter The cabinet of the Royal Thai Government has approved the (new) AIT Charter. It has also approved the Draft Negotiation Framework of the Headquarters Agreement between the Thai Government and AIT. The cabinet approved it in its meeting held on 27 December 2011 and endorsed the submission of the Charter and Draft Negotiation Framework for parliamentary review and approval. Besides, the Thai cabinet has also authorized the Ministry

The formal announcement of the decision of the Council of Ministers was made by Mr. Abul Kalam Azad, Press Secretary of the Bangladesh Prime Minister. Following this, Bangladesh deposited the Instrument of ratificatiun with the Royal Thai Government.

Governor presents President with honor for exceptional leadership during the flood AIT President Prof. Said Irandoust was honored by the Governor of Bangkok, M.R. Sukhumbhand Paribatra at the Fifth Save our Planet Conference organized on 5 January 2012. President Irandoust was honored for providing exceptional leadership during the flooding of the Institute when it was inundated by three metres of water. A commemorative plaque was presented by the Governor to the President “in recognition to the exceptional leadership of the President and Team (faculty, students, staff, alumni, partners) of the Asian Institute of Technology, Bangkok in the face of the 2011 floods which devastated the campus and for the exemplary manner in which the Institute continued its operations in the face of this great adversity.” A press release

issued by the event organizer, ASEAN Affairs, stated that AIT continued its operations in spite of the flood and it conducted its operations from various facilities in and outside Bangkok. Delivering the keynote address, Mom Rajawong Sukhumbhand Paribatra, Governor of Bangkok, remarked that Bangkok is witnessing unplanned infrastructure development, along with an increase in population – both of which are creating a huge issue of sustainable development.

NEF-CCN donates Bt 300,000 for AIT library The Nepal Education FoundationConsortium of Colleges (NEFCCN) has donated Bt. 300,000 to the AIT as a contribution towards its rebuilding and reconstruction. The donation, which was made on 8 January 2012, is to be spent on rebuilding the AIT library. Handing over the donation, Prof. Sriram B. Mathe, Chairperson, NEF-CCN, stated that with this token contribution, they wish to convey to the entire AIT community that “they were with AIT, they are with AIT, and they will

be with AIT.” NEF-CCN and AIT are kindred spirits whose aim is to work towards generation of human resources, he said. “Our contribution comes from our heart, and we want to express our solidarity with

Prof. Said Irandoust, President, AIT, while accepting the donation, expressed his gratitude for helping AIT in times of crisis. “I appreciate our friends from Nepal whose help is unselfish, unlimited and without any condition,” the President remarked. “From all of us at AIT, I can assure you that the donation will be invested in areas where you wish,” he said.

Afghanistan delegation keen on long term relations with AIT A four-member delegation from Afghanistan has shown interest in forging a long-term relationship with AIT. The delegation suggested that AIT could consider Afghanistan as a base for reaching out to Central Asia. The delegation also evaluated the AIT-Balkh University project, where AIT has been providing consulting services since December 2007. The project has been supporting strategic planning and implementation of programs at higher education institutions like Balkh University. The delegation, which comprised of Dr. Sayed Askar Musavi, Chief Advisor for Ministry of Higher Education (MOHE); Dr. Cheragh Ali Cheragh, Chancellor, Balkh University; Mr. Abdul Rahim Wardak, Coordinator, Strengthening Higher Education Projection (SHEP); and Mr. Mohammad Qaasim, AIT-BU Project Manager, stated that they are keen that the collabora-

tion with AIT is long term and strategic. “We wish that the partnership with AIT is no longer restricted to one project, but moves into a long term program partnership,” Dr. Musavi said. The next phase of the program seeks AIT’s engagement in human resource development, curriculum enhancement, information technology development, research capability, institutional development and other partnership programs with 12 universities in Afghanistan.

An alumnus of AIT, Mr. Ahmed Saiful Islam, has been appointed the Chief Operating Officer (COO) of the Hongkong and Shanghai Banking Corporation (HSBC) Limited in Bangladesh.

Prior to this appointment, Mr. Saiful was the Head of Global Payments and Cash Management, HSBC, Bangladesh. He has also worked in Citibank in various positions and has handled various portfolios including payments and cash management, and global transaction banking. An MBA from AIT’s School of Management (2004), Mr. Saiful also holds a Master in European Business from E M Lyon Graduate School of Management, France. He completed his Bachelor’s in Business Administration (BBA) from the Institute of Business Administration (IBA), Dhaka University.

AIT President receiving a donation from Mr. hoang Hung Manh. AIT Alumni in Vietnam have donated Bt. 300,000 to AIT to support its recovery and rehabilitation. The donation was handed over by Mr. Hoang Hung Manh, Senior Laboratory Supervisor at Industrial Systems Engineering Group, School of Engineering and Technology (SET) on 26 January 2012 on behalf of the AIT Alumni in Vietnam. On behalf of the AIT Alumni in Vietnam, Mr. Manh extended his support and encouragement for AIT through this difficult time. He also expressed his appreciation for AIT’s spirit and its hard work towards returning to normalcy.

AIT partners with Italy’s ASVI for Executive Master’s AIT has partnered with Italy’s ASVI School for Management and Social Change to launch an Executive Master’s on Management and Social Change in “Third Sector Management and Fundraising.” An MoU was signed between Dr. Marco Crescenzi, ASVI President and Prof. Said Irandoust, President, AIT on 19 January 2012. The program will stress private sector validation of its graduates and dovetails with AIT’s emphasis of higher learning for the today’s professions, Prof. Irandoust remarked after signing the MoU. Dr. Marco Crescenzi described AIT has a suitable partner for its first overture in to the Asian higher education marketplace. Among those who attended the ceremony included Dr. Sandro Calvani, Director of ASEAN Regional Center on Millennium Development Goals (MDGs), AIT.

Libraries of the future De Spiegel writes about future libraries: “A building appears to hover, cloud-like, on the northern shore of Lake Geneva. This is the new library of the Swiss Federal Institute of Technology in Lausanne, a futuristic expanse of glass and concrete. The Rolex Learning Center, as the complex is officially known, draws together the libraries of 10 separate academic departments into one new central location. Here, studying alone among steel shelves is a thing of the past. Instead, this library of the future is meant to be a marketplace for ideas..... The only things you rarely see here are, well, books. Indeed, the whole setup seems designed to send visitors a message that learning is fun, not laborious.” Read the entire article at this link: http://www.spiegel.de/international/europe/0,1518,791138,00.html. But with Amazon selling more e-books than printed books, read an article in the Washington Post on how libraries are coping with the demand for e-books: http://www.washingtonpost.com/local/as-demand-for-e-books-soars-libraries-struggleto-stock-their-virtual-shelves/2012/01/13/gIQAkIOXzP_story.html?tid=pm_pop. And with e-book sharing and lending becoming popular, Amazon states that in December 2011 alone, Kindle Select books were borrowed 295,000 times. h t t p : / / p h x . c o r p o r a t e - i r. n e t / p h o e n i x . z h t m l ? c = 1 7 6 0 6 0 & p = i r o l newsArticle&ID=1647593&highlight Follow AIT at • Facebook www.facebook.com/aitasia • Youtube www.youtube.com/aitasia

February 2012 edition of the AIT Newsletter

February 2012 edition of the AIT Newsletter