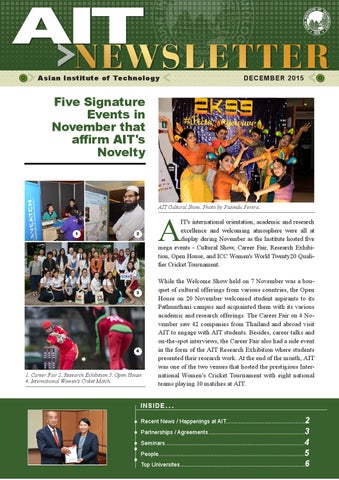 While the Welcome Show held on 7 November was a bouquet of cultural offerings from various countries, the Open House on 20 November welcomed student aspirants to its Pathumthani campus and acquainted them with its various academic and research offerings. The Career Fair on 4 November saw 42 companies from Thailand and abroad visit AIT to engage with AIT students. Besides, career talks and on-the-spot interviews, the Career Fair also had a side event in the form of the AIT Research Exhibition where students presented their research work. At the end of the month, AIT was one of the two venues that hosted the prestigious International Womenâ&#x20AC;&#x2122;s Cricket Tournament with eight national teams playing 10 matches at AIT.

visits AIT Exhibition Booth at CRMA, bestows token of appreciation Her Royal Highness Maha Chakri Sirindorn visited the AIT booth at an exhibition organized by the Chulachomklao Royal Military Academy (CRMA) on 17 November 2015. The Princess also bestowed a token of appreciation to AIT for participating in the event and showcasing five research projects at the exhibition, which was received by Dr. Sarawut Ninsawat of School of Engineering and Technology. The five AIT projects included “Developing an Operational Framework for River Health Assessment in the Mekong River Basin”(by Prof. Mukand Singh Her Royal Highness Maha Chakri Sirindorn bestowing a token of appreciation to AIT. Babel and Dr. Victor R. Shinde); “ AIT Green Weather Station” (by Mr. Sanit Arunpold under the supervision of Dr. Sarawut Ninsawat); “Climate Change and Flash Floods, Highlighting the Needs of a Basin Wise Approach of Implementation of Existing Policies in Jiadhal River, North East India” (by Mr. Arnob Bormudoi, supervised by Dr. Masahiko Nagai); “Assessment of Climate Variability and Change in the Coastal City: A Case Study of Padang City, Indonesia” (by Mr. Nurrohman Wijaya); and “Removal of PPCP (Acetaminophen) from Wastewater in Constructed Wetland with Scripus Validus” (by Mr. Vo Hoang Nhat Phong under the supervision of Dr. Thammarat Koottatep).

AIT short courses are excellent examples of its mission: Chairman AIT short course programs are “excellent examples of its commitment of developing highly qualified and committed professionals who can play a leading role in the sustainable development of their countries, besides accelerating its integration into the global economy.” These were the comments of Dr. Subin Pinkayan, Chairman, AIT Board of Trustees, while delivering the inaugural remarks at the commencement of three professional programs for participants from Bangladesh, Pakistan, Taiwan and Thailand, on 16 November 2015. The three programs were Energy for Sustainable Development, Professional Leadership Program, and Performance Management and Employee Relationship. Dr. Subin said that the 56-year history of AIT is notable for the achievements of its alumni, with the appointment of AIT Alumnus H.E. Dr. Mao Chi-Kuo

as Premier of Taiwan on 8 December 2014 being a historical first for the Institute.

Bangchak Awards Two 1Mil. THB Scholarships The Bangchak Petroleum Public Company Limited on 2 Nov. 2015 welcomed AIT to its corporate headquarters in Bangkok for an official Bangchak Scholarship Ceremony. The event recognized two current AIT Master's students who have each been awarded a scholarship of 1 Million Thai Baht (THB) by the Thai energy giant.

XYZ Printing gifts 3D printers to AIT XYZprinting, Inc., Thailand, donated four 3D printers and a high-tech scanner to AIT at a press conference in Bangkok on November 26. The donation was made at the media event which marked the opening of operations for XYXprinting, Thailand, and the firm’s 3D printer product launch for the country.

UNESCO to celebrate birth centenary of AIT’s first Board Chairman

United Nations Educational, Scientific and Cultural Organization (UNESCO) will celebrate the birth centenary of Dr. Puey Ungphakorn, first Chairman of the AIT board of Trustees. His birth centenary falls in 2016. The resolution for celebrating Dr Puey’s 100th birth anniversary was accepted at the 38th General Conference of UNESCO held on 2 November 2015. Dr. Puey Ungphakorn was the Chairman of the AIT Board of Trustees from 1968-1973, and he played an instrumental role in transforming SEATO Graduate School of Engineering into the Asian Institute of Technology in 1968. He also helped in securing a permanent campus location for AIT from the Royal Thai Government. An economist by profession, Dr Puey was former Governor of the Bank of Thailand, and former Rector of Thammasat University (TU). He received the Ramon Magsaysay Award in 1965.

AIT alumnus Mr. Narong Gieddech, has been selected as the new Governor of the Expressway Authority of Thailand (EXAT). He shall assume office from 1 January 2016. Prior to his elevation, he served

Dr. Somchet Thinaphong elected AITAA president Dr. Somchet Thinaphong has been unanimously elected as the new President of the AIT AlumDr. Somchet ni Association Thinaphong (AITAA). He was elected during the forty-fourth Governing Body Meeting of the AITAA held in Colombo, Sri Lanka. He succeeds Mr. Thanin Bumrungsap, and shall assume office for a two-year term beginning 1 January 2016. Dr. Somchet obtained his Master’s of Engineering (Water Resource Engineering) and Ph.D from AIT in 1975 and 1980 respectively. He is currently serving as the Chairman of the Executive Board of National Innovation Agency (NIA), Ministry of Industry, as well as Chairman of Executive Board of Geo-Informatics and Space Technology Development Agency (GISTDA), Ministry of Science and Technology.

as Deputy Governor of Administration at EXAT. Mr. Narong graduated with a Master’s in Engineering in Infrastructure Planning and Management from AIT’s School of Civil Engineering in 1997. Established in 1972, EXAT is state enterprise under Thailand’s Ministry of Transportation and Communications, with an objective of creating, organizing, renovating and maintaining expressways.

Prof. Mukand Singh Babel of AIT’s Water Engineering and Management (WEM) has been elected as one of the 10 Directors of the International Water Resources Association (IWRA). The new 20-member Executive Board of IWRA has representatives from 15 countries, representing five continents, and they will assume office for a three-year period from 1 January 2016.

The President and Secretary General of IRWA are from France, while the Vice Presidents are from Portugal, China and Nepal. IWRA is an international network of multidisciplinary experts on water resources, which was incorporated in 1971 in the State of Wisconsin, USA.

Thomas Hamilton to be new Director, AIT Language Center Thomas Hamilton has been appointed the new Director of the AIT Language Center. He will take over his duties and official responsibilities on 1 January 2016 from current director Matthew C. Laszewski. Mr. Hamilton joined AIT in 2011 as Language Lecturer, and he was assigned the duties of Coordinator in 2012, and Senior Language Lecturer in 2015. He began his teaching career in Humboldt State University, California, United States in 2003, and since then, he has taught in South Korea and Thailand. Prior to AIT, he was teaching at the National Institute of Development Administration (NIDA), Bangkok, Thailand.

AIT hosts ICC Women's World Twenty20 Qualifier Cricket Tournament The lush fields of AIT are host to the World Women’s Cricket matches from 28 November to 5 December — a landmark international tournament being hosted by Thailand for the first time. AIT is one of the field venues for this international sports event where eight teams from Bangladesh, China, Ireland, the Netherlands, Papua New Guinea, Scotland, Zimbabwe, and hosts Thailand are competing for two spots to play in the ICC World Twenty20 to be held in India next year. Four qualifying matches between Ireland and Scotland, China and Zimbabwe, Bangladesh and Scotland, Thailand and Papua New Guinea have already been played. Two more qualifying matches, two Shield Semi-Finals, besides the Shield Trophy and playoff for the third position will also be at AIT.

December 2015 edition of the monthly newsletter of the Asian Institute of Technology (AIT).

December 2015 edition of the monthly newsletter of the Asian Institute of Technology (AIT).