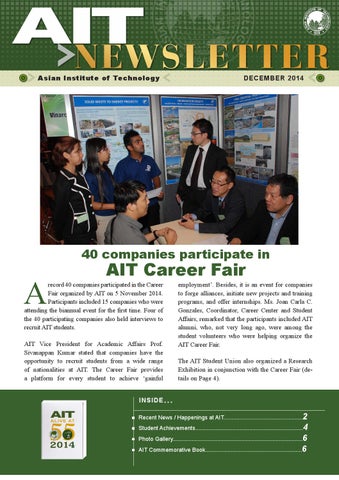 record 40 companies participated in the Career Fair organized by AIT on 5 November 2014. Participants included 15 companies who were attending the biannual event for the first time. Four of the 40 participating companies also held interviews to recruit AIT students. AIT Vice President for Academic Affairs Prof. Sivanappan Kumar stated that companies have the opportunity to recruit students from a wide range of nationalities at AIT. The Career Fair provides a platform for every student to achieve ‘gainful

employment’. Besides, it is an event for companies to forge alliances, initiate new projects and training programs, and offer internships. Ms. Joan Carla C. Gonzales, Coordinator, Career Center and Student Affairs, remarked that the participants included AIT alumni, who, not very long ago, were among the student volunteers who were helping organize the AIT Career Fair. The AIT Student Union also organized a Research Exhibition in conjunction with the Career Fair (details on Page 4).

Japan’s Vice Minister for Global Environment compliments AIT Vice Minister for Global Environment, Ministry of Environment, Japan, H.E. Mr. Soichiro Seki visited AIT on 26 November 2014, and complimented AIT for taking the lead in organizing a forum on Climate Change in the run up to the Conference of the Parties on Climate Change (COP21) in Paris, France in 2015. The Minister was accompanied by a high-level delegation including Dr. Hideyuki Mori, President of Institute for Global Environmental Strategies (IGES); Dr. Daisuke Sano, Director, IGES Regional Centre, Bangkok; Dr. Kazuhiko Takemoto, Director, Institute for the Advanced Studies of Sustainability, United Nations University (UNU-IAS); and

Maiden visit by Ambassador of Mongolia Mongolia’s Ambassador to Thailand H.E. Mr. Battumur Chimeddorj on his maiden visit to AIT on 12 November 2014 revealed that all qualified Mongolian student applicants to AIT who receive an offer letter of admission would now be eligible to avail of government-funded scholarship opportunities. The envoy was accompanied by Mr. Batbaatar Togtokhbayar, Counsellor, Embassy of Mongolia, Bangkok. This announcement is a result of the meeting of a senior AIT delegation led by President Prof. Worsak Kanok-Nukulchai, which met the Mongolian Minister of Education and Science H.E. Mr. Luvsannyam Gantumur on October 20 during their visit to Ulan Bator.

Later, on 24 November, the President of the Mongolian University of Life Sciences Dr. Tumurbaatar Kheruuga also paid a visit to AIT.

Dr. Naveed Anwar, Executive Director, AIT Consulting, stated that participants in the workshop came from Myanmar, Laos, Philippines and Thailand. He added that AIT had been working on the issue of infrastructure, construction and low-cost housing ever since its inception.

For the sixth year in a row, SOM was ranked in the top echelon of the nation’s business schools. The results placed the School of Management in the top 250 business schools worldwide, according to the ranking released in Istanbul in October. Seven business schools in Thailand were ranked, this year. SOM was one of only two institutions to be extended ‘4 Palmes of Excellence’ as a “top Business School with significant international influence.”

Delegations from MRDC and NDC.

Poster exhibition demonstrates student research at AIT The Student Union Research Exhibition organized on 5 November 2014 not only demonstrated the research capability of AIT students, but also attracted interest from private companies. The array of 18 research posters Students at the Research Poster Exhibition. that adorned the display boards at the AIT Conference Center exemplified the focused research being carried out by students at AIT. A student-led affair, the one-day event coincided with AIT’s biannual career fair. Says Muhammad Shafiq, Chairperson of the AIT Students Union Academic Committee, whose team organized the event, “The research exhibition had a three-fold purpose — to foster a research environment involving students and AIT administration, to provide a platform for AIT students to display their research, and to attract the interest of private sector.” Based on the posters, three AIT students were approached by private ompanies who wished to learn more about their research.

Screenshot of one of the videos.

From the swimming pool to the laboratory; from the endless assignments and tests to playtime; and from late study hours to the international culinary delights at AIT - these were some of the aspects about campus life covered by AIT students in the videos screened at the AIT Short Film Festival.

The creative talents of AIT students were on full display during the screening of six videos during the AIT Short Film Festival and Prize Distribution organized on 12 November 2014. Based on the theme “A day in the life of an AIT student,” students competed against each other to prepare short videos on their daily life. The six-video playlist can be viewed at this link: http://goo.gl/ ULTxYC

Former faculty welcome invitation to be ‘Distinguished Adjunct Faculty’ AIT President Prof. Worsak Kanok-Nukulchai’s recent invitation to all ex-faculty members of AIT to re-engage the institute as ‘Distinguished Adjunct Faculty’ has been extremely well received, based on the high volume of positive replies received from around the world. In late October he invited all exfaculty “who had AIT in their heart” to complete a survey indicating the form of professional support they could offer. Central to President Worsak’s plan is that former faculty can maintain their professional affiliation with AIT by using AIT’s ID, business card and email address. In addition, AIT would provide a common office space with full-time secretarial support, whenever former faculty are present at AIT, the president pledged. He writes: “Although the association will be based on a voluntary basis, ‘Distinguished Adjunct Faculty’ can be remunerated based on specific services to be rendered to AIT Schools, research projects or other fund generating units, by providing course teaching, research, outreach, consulting and developing new academic curricula.”

Dr. Kittichai Trairatanasiricha (right) being congratulated on the announcement.

The announcement was made by Dr. Narongchai Adornseranee, Chairman of the University Council, after listening to the vision statement and presentations of three candidates. Dr. Kittichai received his Master’s in Engineering (Agricultural Machinery) from AIT in 1985.

Photographs from the joint marathon organized by AIT, Thammasat University, and National Science and Technology Development Agency on 14 November 2014.

43rd AITAA GBM in Manila one for the ages

“AIT Alive at 55”, a new commemorative book documenting AIT during its 55year history, was launched in Manila by the AIT Alumni Association (AITAA) Philippine Chapter. The publication’s release took center stage at a special welcome dinner on November 21 to kick-off the 43rd Governing Board Meeting (AITAA) held from 21 - 24 November 2014 in the Philippines. Unveiled in the presence of the Thailand’s Ambassador to the Philippines H.E. Mr. Prasas Prasasvinitchai, Chairman of the AIT Board of Trustees Dr. Subin Pinkayan, AIT President Prof. Worsak Kanok-Nukulchai and AITAA President Mr. Thanin Bumrungsap, the book was signed by former President of the Philippines H.E. Fidel V. Ramos. “AIT Alive at 55” is the brainchild of Editor-in-Chief Mr. Joseph Paul Sianghio, who championed the book along with Ms. Fe Nuestro-Ferriols and Mr. Dell Santos.” AIT Hall of Fame member and Filipino alumnus Prof. Ricardo P. Pama is a major contributor to the book. Follow AIT at • Facebook • YouTube • Twitter • Google+ • LinkedIn • Pinterest

December 2014 edition of the monthly newsletter of the Asian Institute of Technology (AIT).

December 2014 edition of the monthly newsletter of the Asian Institute of Technology (AIT).