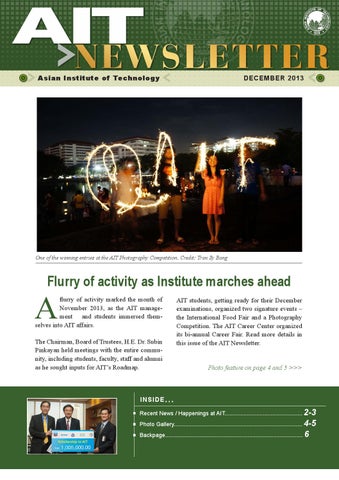 One of the winning entries at the AIT Photography Competition. Credit: Tran Sy Bang

Flurry of activity as Institute marches ahead

flurry of activity marked the month of November 2013, as the AIT management and students immersed themselves into AIT affairs.

The Chairman, Board of Trustees, H.E. Dr. Subin Pinkayan held meetings with the entire community, including students, faculty, staff and alumni as he sought inputs for AITâ&#x20AC;&#x2122;s Roadmap.

AIT students, getting ready for their December examinations, organized two signature events â&#x20AC;&#x201C; the International Food Fair and a Photography Competition. The AIT Career Center organized its bi-annual Career Fair. Read more details in this issue of the AIT Newsletter. Photo feature on page 4 and 5 >>>

Internet Hall of Fame profiles AIT’s pioneering inductee Prof. Kanchana Kanchanasut The Internet Hall of Fame profiled AIT’s Vice President of Research Prof. Kanchana Kanchanasut, as part of its series of exclusive articles on its 2013 inductees. The article “Professor Beats Daunting Odds, Upheaval to Link Thailand to Internet” is highlighted under the Hall of Fame’s Exclusive Series. It tells the story of the AIT computer scientist’s pioneering role to bring the Web to life in Thailand in the 1980s.

Mr. Zhou, who was visiting AIT for the first time, expressed his happiness at visiting AIT stating that the Institute has a long history of cooperation with China. He stated that he would be talking to the China Scholarship Council (CSC) to ensure optimum utilization of its scholarships to AIT. Mr. Zhou stated that internationality is an important criterion in China, and AIT is rightly positioned in this aspect.

AITâ&#x20AC;&#x2122;s Shobhakar Dhakal named to team of international climate scientists pledged to help cities Dr. Shobhakar Dhakal of AIT has been named a lead member of an international effort by top climate scientists to help cities around the world address the causes and consequences of climate change. Dr. Shobhakar will be overseeing expert teams that will produce assessments on a range of issues, from urban health to food to water and energy systems, transportation, economics and private finance, and governance. The work is part of a larger effort by the Urban Climate Change Research Network (UCCRN) to synthesize scientific knowledge and produce a resource for guiding

cities in their response to climate change. The Second UCCRN Assessment Report on Climate Change and Cities (ARC3-2) will be published in 2015.

Close to 90 per cent of sludge is dumped, study reveals Though Thailand boasts almost 100 per cent sanitation coverage, close to 90 per cent of fecal sludge is dumped illegally in agriculture areas, open spaces and water streams. This, along with other unpleasant facts about sanitation have emerged from the field survey conducted by a team from AIT led by Dr. Thammarat Koottatep of the School of Environment, Resources and Development (SERD). Dr. Thammarat, who is heading the Reinventing the Toilet project awarded by the Bill and Melinda Gates Foundation, presented his findings on 11 November 2013 at the projectâ&#x20AC;&#x2122;s Advisory Panel meeting in Bangkok.

Newly elected Chairman of the AIT Board of Trustees H.E. Dr. Subin Pinkayan on 6 November 2013 reached out to the AIT Community through a series of on-campus town hall-type meetings with faculty, staff and students. He also sought inputs for the proposed AIT Roadmap.

Winners of the AIT Photography Competitions 2013

The GBM members also interacted with H. E. Dr. Subin Pinkayan, Chairman of AIT Board of Trustees, who provided insight on AIT’s roadmap to the future.

Wiping out the Blackboard

“Classrooms have had computers for decades, but in

the past few years the buzz about “education technology” (or edtech) has become persistent, especially in America. This is because of new generations of learning software, free online tutorials and better connectivity.” But will it wipeout the Blackboard? Read more in The Economist http://www.economist.com/blogs/theworldin2014/2013/11/edtech-2014

December 2013 edition of the monthly newsletter of the Asian Institute of Technology (AIT).

December 2013 edition of the monthly newsletter of the Asian Institute of Technology (AIT).