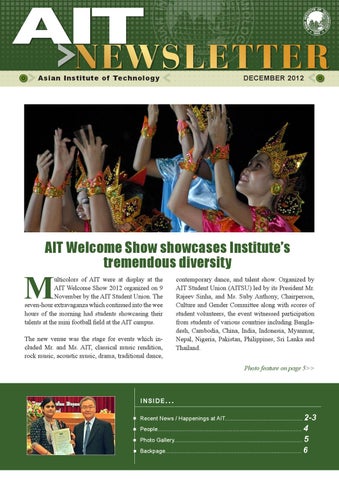 ulticolors of AIT were at display at the AIT Welcome Show 2012 organized on 9 November by the AIT Student Union. The seven-hour extravaganza which continued into the wee hours of the morning had students showcasing their talents at the mini football field at the AIT campus. The new venue was the stage for events which included Mr. and Ms. AIT, classical music rendition, rock music, acoustic music, drama, traditional dance,

AIT’s Yunus Center features at the Global Social Business Summit Yunus Center at AIT (YCA) featured front and center at the Fourth Global Social Business Summit 2012 held at Vienna from 7-10 November 2012. YCA was one of only six key presenters, both in the academic session, and at the main plenary graced by Her Majesty Queen Sofia of Spain, and state representatives from Austria, Bahrain, and Brazil. The Summit also provided an opportunity to YCA to re-launch and introduce its new initiatives. Dr. Faiz Shah, Director, YCA presented the six thematic areas of YCA’s newly launched program at the plenary session.

A record-breaking 38 companies join November Career Fair 2012 A record-breaking 38 companies participated at the AIT Career Fair on 7 November 2012. The event offered fair-goers a full range of job placement availabilities, internship opportunities, as well as information on long-term career prospects, on-the-job training, research partners, and opportunities for networking with attending company representatives. An IELTS Preparation Workshop was also organized. Ten companies conducted on-the-spot interviews on the sidelines of the event. Overall, the fair was dominated by a large number of Thai firms who set-up employee recruitment booths on the ground level of the AIT Conference Center.

SEMINARS BNF is the key of future Green Revolution in Africa: Expert Biological Nitrogen Fixation (BNF) is the key to African food security, human nutrition and health. It acts as a unifying system contributing to soil nitrogen economy, aids soil fertility, helps stimulate plant and animal protein production, and increases the legume and cereal crop yield. This was stated by Prof. Felix Dapare Dakora of Tshwane University of Technology, South Africa, while delivering a lecture on “Challenges on food security in poverty alleviation” on 2 November 2012 AIT. Prof. Dakora, who is the recipient of the ‘UNESCO-Equatorial Guinea International Prize for Research in Life Sciences’ regretted that not enough young scientists were being groomed in Africa, while the senior batch of scientists are gradually fading away.

Climate change and disasters impinge on water and waste management issues Climate change, extreme climatic events and disasters are greatly influencing water and waste management issues, and researchers and policy makers can no longer afford to ignore them during project management and policy formulation. Traversing through the challenges confronting the water and sanitation sector, Prof. Guéladio Cissé of the Swiss Tropical and Public Health Institute (Swiss TPH), Switzerland, spoke about management trends, ongoing works, and the relationship of sanitation and hygiene with the Millennium Development Goals (MDGs) in a special lecture on “New trends and challenges in waste management” organized at AIT on 12 November 2012.

Mr. Kevin A Mauritson has joined the AIT International School as its new Principal with effect from 5 November 2012. Prior to joining AIT, Mr. Mauritson worked as Executive Principal of Sampoerna Academy Bogor in Bogor, Indonesia.

AIT’s Abha Mishra gets best paper award AIT’s Dr. Abha Mishra has been conferred the SAWADA Prize for the best paper published in the journal ‘Paddy and Water Environment Engineering’ for the year 2012. The award was granted during the International Society of Paddy and Water Environment Engineering (PAWEES) 2012 Conference titled ‘Challenges of Environment and Water Management in Monsoon Asia’ held from 27-29 November 2012 at the Royal Irrigation Department, Pakkred, Thailand.

Dr. Assadej Vanichchinchai, an AIT alumnus from the Shool of Management was presented the prestigious “Outstanding Academic Staff Award 2012 of Association of Private Higher Education Institute of Thailand” by Thailand’s Deputy Prime Minister and Minister of Education, H.E. Mr. Phongthep Thepkanjana on 18 November 2012.

Afghanistan wishes to send 100 undergraduate students Islamic Republic of Afghanistan wishes to send one hundred students to pursue undergraduate programs at AIT. This was stated by H.E. Prof. Obaiddullah Obaid, Minister of Higher Education (MoHE), Afghanistan, during a visit to AIT. The Minister conveyed his greetings from President of Afghanistan, H.E. Mr. Hamid Karzai to the AIT President Prof. Said Irandoust. The Minister stated that previous batches of students who have graduated from AIT had expressed extreme satisfaction and happiness at their studies and stay at AIT, and this has encouraged the Ministry to send more students to AIT. AIT and Afghanistan have a relationship that began in 1970, and we will make all steps to enhance the relationship, he added. Currently Afghanistan has 50 students at AIT, and there

is scope for sending another 100 students in undergraduate courses, the Minister said. Since the undergraduate intake is in August, Afghanistan can send these students for a bridging program as early as January, he added.

Who will control the Internet? Media has been abuzz over reports about take-over of the Internet ahead of the International Telecommunication Union (ITU) meet in December to be held in Dubai.

The New York Times had a news report debuking claims of an Internet takeover: http://www.nytimes.com/2012/06/11/technology/debunking-rumors-of-aninternet-takeover.html The Register mentioned the EU vote: http://www.theregister.co.uk/2012/11/24/european_parliament_votes_against_itu/ Google too jumped into the fray: http://www.slashgear.com/google-rallies-against-closed-door-itu-internetregulations-meeting-by-un-26258275/ BBC reported of US attempts to resist the move: http://www.bbc.co.uk/news/technology-19106420

December 2012 edition of the monthly newsletter of Asian Institute of Technology (AIT).

December 2012 edition of the monthly newsletter of Asian Institute of Technology (AIT).