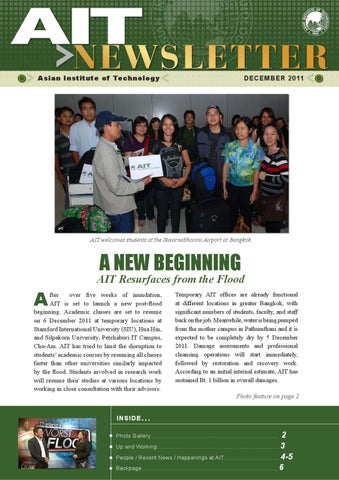 AIT welcomes students at the Suvarnabhoomi Airport at Bangkok.

AIT Resurfaces from the Flood

fter over five weeks of inundation, AIT is set to launch a new post-flood beginning. Academic classes are set to resume on 6 December 2011 at temporary locations at Stamford International University (SIU), Hua Hin, and Silpakorn University, Petchaburi IT Campus, Cha-Am. AIT has tried to limit the disruption to studentsâ&#x20AC;&#x2122; academic courses by resuming all classes faster than other universities similarly impacted by the flood. Students involved in research work will resume their studies at various locations by working in close consultation with their advisors.

Temporary AIT offices are already functional at different locations in greater Bangkok, with significant numbers of students, faculty, and staff back on the job. Meanwhile, water is being pumped from the mother campus in Pathumthani and it is expected to be completely dry by 5 December 2011. Damage assessments and professional cleansing operations will start immediately, followed by restoration and recovery work. According to an initial internal estimate, AIT has sustained Bt. 1 billion in overall damages. Photo feature on page 2

1,3 Restoration and cleaning operations at the AIT campus. 2. Chairman of the Board of Trustees, H.E. Dr. Tej Bunnag, led a visit to AIT along with other members of the Board including Mr. Sohail Mahmood, Ambassador of Pakistan to Thailand. 4. Specialized mobile pumps from the Japan Disaster Relief Team of Japanâ&#x20AC;&#x2122;s Ministry of Land, Infrastructure, Transportation and Tourism (MLIT), Government of Japan. 5. Pumps set up by Ch. Karnchang Public Company on the west side of the campus. 6. H.E. Mr. Seiji Kojima, Ambassador of Japan, H.E. Mr. Kazi Imtiaz Hossain, Ambassador of Bangladesh, and representatives of the AIT Board of Trustees along with Prof. Said Irandoust at AIT to obtain a first hand experience of the flood hit campus. 7. AIT officials distribute relief material among affected people in Pathumthani.

Special Board Meeting focuses on AIT’s flood The special meeting of the Board of Trustees of AIT focused on the flood situation at AIT and noted that it would take considerable time and resources to rehabilitate the AIT campus. Chairing the meeting, H.E. Dr. Tej Bunnag stated that he was “speechless, sad and shocked by the scale of the disaster and it’s impact on AIT”. The Chairman viewed the move to temporary locations as practical, adding that the priority is students hailing from 42 countries. The Chairman informed the Board that the President and AIT Management Team has decided to relocate temporarily and partially to Hua Hin, and restart classes from 6 December 2011, and in the course of doing so, had consulted closely with himself and the Chairman of the Executive Committee. He added that AIT is actively liaising with Thammasat University, Thailand Science Park, and concerned

Meeting of the AIT Board of Trustees held on 22 November 2011. authorities to work on recovery and rebuilding efforts. On behalf of all members of the Board, the Chaiman thanked the President Prof Said Irandoust and his team members, especially Professor Worsak Kanok-Nukulchai, AIT Vice President for Resource Development, for their tremendous work. Several trustees also expressed their strong support to the President and team for the manner in which the situation was handled, besides the efforts made in the aftermath of the floods, while also expressing their deep sympathies to Thailand and its people.

School Deans, Vice Presidents and other senior administration officials explain aspects of the flood that devastated AIT on 21 October 2011, and to pose questions to the administration regarding what lies next for the Institute’s students, faculty and staff.

The town hall-style event was the first of its kind in the Institute’s history. The over three-hour meeting was marked by lively and engaging question and answer interactions between members of the community and the administration. Participants expressed concern about the present state of AIT and its future.

AIT has constituted four task forces for creating its Recovery, Reconstruction and Rehabilitation Plan. At a meeting organized at AIT’s temporary office at Chulalongkorn University, the University President, Prof. Said Irandoust presented the draft framework for the rebuilding plan of AIT.

New AIT Charter to come into force from 30 Jan

Prof. Irandoust briefed the Ambassador on various aspects of the inundation of AIT, the extent of the damage to the AIT campus, and the ongoing appeal to all stakeholders and countries to consider supporting the Institute to help it tide over the crisis. The ambassador expressed his sympathy over the damage AIT has suffered and the negative impact the flood has had on students, staff, faculty, and the AIT community. AIT President, Prof. Said Irandoust, informed Ambassador Shulze of the 30-year old association between the two. 1261 students from 25 countries graduated with either Master’s or Doctoral degrees courtesy German support from 1972 to 2002. Later, the Ambassador attended a luncheon hosted by H.E. Dr. Tej Bunnag, Chairman of the Board of Trustees, AIT.

Dr Seree on Thai PBS An alumnus of AIT, Dr. Seree Supratid has been labelled the “Nostradamus of Bangkok floods” by the English daily Bangkok Post. Dr. Seree has emerged as a national celebrity following his accurate flood warnings and predictions, easy to understand reliable information and technical advice. A feature on Dr. Seree in the English daily Bangkok Post states that “The Nostradamus of Bangkok floods has become a sort of celebrity with the result that people now wave to him, approach him and pose for photographs, and even seek his autograph when out inspecting flood situation in their neighbourhoods.” Dr. Seree’s fame has increased following the 15 minute daily news programme, Vikraw Satanakarn Nam (Analysing the Flood Situation) that is broadcast daily at 2000 hours on the Thai PBS channel. After graduating from AIT with a Master’s in Engineering in Water Resource Engineering in 1987, Dr. Seree has maintained his links with the Institute. He was the co-chair for the session “Assessing the damage and mapping the risks” during a regional symposium on “Scientific forum on the tsunami, its impact and recovery” organized at AIT in June 2005.

The University also highlighted the fund raising drive at their website under the headline “Students collect money for AIT.” Written by Mr. Jonas Slättung, the article mentions the partnership between AIT and the University of Borås.

Article on studentcentred learning An article coauthored by H.E. Dr. Tej Bunnag, Chairman, Board of Trustees, AIT, and former Foreign Minister of Thailand, and Prof. Said Irandoust, President, AIT, was published in the English daily The Nation on 24 November 2011. Titled “Welcome to the new world of student-centred education,” the article stresses the need for institutes of higher education to concentrate on students while imparting education. It calls for change in pedagogy, and the need to involve the industry to ensure a student-centric approach. The article can be read at this link http://www.nationmultimedia.com/ national/Welcome-to-the-newworld-of-student-centred-educat-30170498.html

Chubu University, Japan, has decided to contribute one million Yen towards disaster recovery for AIT.

In a letter to the AIT President, Prof. Said Irandoust, Prof. Kiyoshi Honda of Chubu University, stated that the Chairman of the Board of Chubu University, Prof. Iiyoshi Atsuo; the University President, Prof. Amashita Okitsugu; Prof. Inasaki Ichiro of the Chubu Institute of Advanced Studies; Prof. Fukui Hiromichi of the International GIS Center, and many others are fully aware of the conditions at AIT, and that they would like to extend their sympathy to AIT. Prof. Honda set up a Thailand flood site at: http://de21.digitalasia.chubu.ac.jp/floodmap/.

Ch. Karnchang was able to drain about 1 million cubic meters of flood water from AIT on to the west lake. AIT President Said Irandoust expressed his thanks to the company’s Mr. Pleaw Triwisawawej, its engineers, and to the alumni network for assisting AIT to pump such huge quantities of water from the campus. With the departure of Ch. Karnchangm, two highly specialized mobile pump vehicles from the Japan Disaster Relief Team of Japan’s Ministry of Land, Infrastructure, Transportation and Tourism (MLIT), Government of Japan are now tasked to eliminate the remaining pools of water. The assistance resulted from AIT President Said Irandoust’s earlier request to the Embassy of Japan to Thailand, and the strong follow up support of AIT Board Member H.E. Seiji Kojima, Ambassador of Japan.

Inundated AIT maps Thailand’s flood How can an Institute which is already flooded help others cope with the situation? How can it generate information products to grapple with floods, when it is itself faced with a disaster? At AIT, which faced its greatest ever crisis when it was inundated with 2 meters of water on 21 October 2011, work on flood and disaster management is still on. The Disaster Charter on the floods in Thailand was activated on 17 October 2011 following a request by the Asia Disaster Reduction Center (ADRC) through Sentinel Asia, and AIT was appointed as incharge of project management. Dr. Masahiko Nagai, Associate Director, AIT’s Geo Informatics Center, was appointed project manager of the Disaster Charter. Since then, scores of satellite maps and value-added products have been prepared on the Thailand floods. These satellite maps are being used by organizations like GeoInformatics and Space Technology Development (GISTDA), Department of Disaster Prevention and Mitigation (DDPM), and UNESCAP. “A significant fact is that these products have been produced by student volunteers who are pursuing studies in Remote Sensing and Geographical Information Systems at AIT,” Dr. Nagai says. The entire set of Thailand flood maps can be downloaded from this link http:// www.disasterscharter.org/web/charter/activation_details?p_r_p_1415474252_ assetId=ACT-376 Follow AIT at • Facebook www.facebook.com/aitasia • Youtube www.youtube.com/aitasia

December 2011 edition of the AIT Newsletter

December 2011 edition of the AIT Newsletter