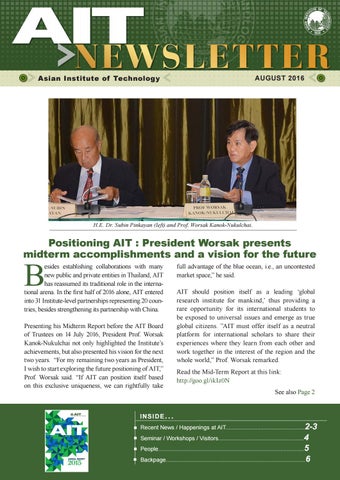 Positioning AIT : President Worsak presents midterm accomplishments and a vision for the future

esides establishing collaborations with many new public and private entities in Thailand, AIT has reassumed its traditional role in the international arena. In the first half of 2016 alone, AIT entered into 31 Institute-level partnerships representing 20 countries, besides strengthening its partnership with China. Presenting his Midterm Report before the AIT Board of Trustees on 14 July 2016, President Prof. Worsak Kanok-Nukulchai not only highlighted the Institute’s achievements, but also presented his vision for the next two years. “For my remaining two years as President, I wish to start exploring the future positioning of AIT,” Prof. Worsak said. “If AIT can position itself based on this exclusive uniqueness, we can rightfully take

full advantage of the blue ocean, i.e., an uncontested market space,” he said. AIT should position itself as a leading ‘global research institute for mankind,’ thus providing a rare opportunity for its international students to be exposed to universal issues and emerge as true global citizens. ”AIT must offer itself as a neutral platform for international scholars to share their experiences where they learn from each other and work together in the interest of the region and the whole world,” Prof. Worsak remarked. Read the Mid-Term Report at this link: http://goo.gl/ikIz0N See also Page 2

AIT RANKS AT THE TOP IN INTERNATIONAL ORIENTATION

AIT DEGREE RECOGNISED IN INDIA FOR THE FIRST TIME

REACHING OUT TO FORMER FACULTY MEMBERS

Members of AIT Hall of Fame / Board of Trustees

Fifteen Years of Disaster Relief from Space: AIT in the prestigious “Science” journal

Till a few years ago, very few specialists were working on the analysis and use of satellite images. However, for the past 15 years, a niche area has developed of those experts who are using satellite data for disaster Cover page of Science. management. Tracking these developments over the past decade and a half is an article titled “Global trends in satellite-based emergency mapping,” published in the latest issue of the prestigious Science Journal (15 July 2016). Among the authors is a scientist from AIT, Dr. Manzul Kumar Hazarika, who serves as Director (Project Operations) at AIT’s Geoinformatics Center (GIC). In this paper, more than 1000 major disaster situations from 2000-2014 were analyzed where satellite monitoring was employed. An international team of 17 experts from leading space organizations and research institutions analyzed the historical development of satellite-based emergency mapping, and presented global patterns alongside historic and emerging trends in this field.

Ideal Fastener Asia Ltd., CEO Mr. Franklin Hung signed the MoA with AIT Vice President for Administration Prof. Kazuo Yamamoto. A total of 10,899,020 THB will be provided by the company to support two Master’s scholarships and one Doctoral scholarship, as well as to fund laboratory supplies and instrumentation and equipment at the AIT Center of Excellence in Nanotechnology for nanotechnology research and development.

Workshop on Disaster Resilience Education Capacity Building A galaxy of experts spoke about the importance of creating disaster resilience capacity in Southeast Asia during a workshop organized at AIT on 21 July 2016. The Disaster Preparedness, Mitigation and Management (DPMM) program at AIT is a partner in the project ‘Disaster Resilience Education Capacity Building in Southeast Asia’ with University of Newcastle, Australia, under the Australia ASEAN Council (AAC) grant. Experts who spoke at the workshop included Dr. Waheed Uddin of University of Mississippi; Mr. Arun Pinta of Department of Disaster Prevention and Management, Thailand; Mr. Chaiwat Prechawit of Panya Consultants Co., Ltd, Thailand; Dr. Temchit Chantaka of National Institute for Development of Teacher, Faculty Staff and Educational Personnel (NIDTEP), Thai Ministry of Education (Local Government); Dr. Jamie Mackee of University of Newcastle, Australia; and Dr. Indrajit Pal of AIT. Workshop in progress at AIT.

Transitioning towards a sustainable bioeconomy Ever since the commencement of the Oil Age 150 years ago, the world has witnessed many “Black Swan” events leading to unpredictable oil prices. This signals a need to focus on sustainable bioeconomy with a renewed emphasis on innovation. Tracing the historical perspective on the development of biorefining research and recent challenges in bioeconomy was Prof. Sudip K Rakshit, who delivered the Fifth Distinguished Adjunct Faculty (DAF) Seminar at AIT on 6 July 2016. Prof. Rakshit, who served Prof. Sudip K Rakshit (left) with Prof. Sivanappan Kumar. AIT as Vice President for Research (2005-2012), spoke of the policy-technology interface stating that bioethanol production in Canada witnessed a major increase from 2005 when the government made it mandatory to mix alcohol with petrol. He anticipated that in the coming times, paper mills in Canada will move towards becoming energy producing centers.

JICA visits AIT, explores future collaboration Japan International Cooperation Agency (JICA) is expanding in Thailand, and will focus on human resource development in the field of engineering and science. Visiting AIT on 14 July 2016, a threemember JICA delegation explored AIT’s expertise and offerings, and hoped that the two organizations can work toward human resource development in the region.

Surendra Shrestha joins as new Vice President for Development Mr. Surendra Shrestha has joined AIT as the new Vice President for Development (VPD) with effect from 1 July 2016. Earlier, his appointment as VPD was endorsed by the AIT Board of Trustees at its meeting held on 18 February 2016. An AIT alumnus, Mr. Shrestha completed his MSc. in Computer Applications (1979-80). Prior to joining AIT, he was serving as Director of United Nations Environment Programme’s International Environmental Technology Centre (UNEP IETC). He also delivered the distinguished alumni address on the occasion of AIT’s 120th Graduation. Mr. Shrestha has served in management capacities in Africa, Asia, Europe and North America in the United Nations. Mr. Surendra Shrestha

A Photo Folio of AIT events and accomplishments for the preceding two-year period has been released. It can be downloaded at this link: http://goo.gl/YsIBVs

August 2016 edition of the monthly newsletter of the Asian Institute of Technology (AIT).

August 2016 edition of the monthly newsletter of the Asian Institute of Technology (AIT).