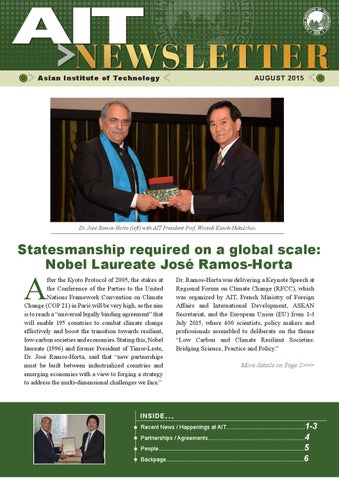 fter the Kyoto Protocol of 2005, the stakes at the Conference of the Parties to the United Nations Framework Convention on Climate Change (COP 21) in Paris will be very high, as the aim is to reach a “universal legally binding agreement” that will enable 195 countries to combat climate change effectively and boost the transition towards resilient, low-carbon societies and economies. Stating this, Nobel laureate (1996) and former President of Timor-Leste, Dr. José Ramos-Horta, said that “new partnerships must be built between industrialized countries and emerging economies with a view to forging a strategy to address the multi-dimensional challenges we face.”

Dr. Ramos-Horta was delivering a Keynote Speech at Regional Forum on Climate Change (RFCC), which was organized by AIT, French Ministry of Foreign Affairs and International Development, ASEAN Secretariat, and the European Union (EU) from 1-3 July 2015, where 400 scientists, policy makers and professionals assembled to deliberate on the theme “Low Carbon and Climate Resilient Societies: Bridging Science, Practice and Policy.” More details on Page 2>>>

Paris Conference of Parties could be a turning point: Experts at RFCC

Press Conference at Embassy of France.

COP 21 could be a turning point for humanity if countries are able to achieve a new international agreement aimed at keeping global warming below 2°C. This was the sentiment of various experts, scientists, policy makers and practitioners that had assembled at AIT for the Regional Forum on Climate Change (RFCC) held between 1-3 July 2015.

The Conference had 20 scientific sessions with 115 presentations, seven side events, and 400 participants from 20 countries. Besides the conference, the forum also hosted a media training program, an exhibition, poster sessions, and a press conference that was organized at the premises of the Embassy of France.

Message from RFCC to COP21 AIT President Prof. Worsak Kanok-Nukulchai read the final message from RFCC, which would serve as input for COP21 to be held in Paris this coming December. The message covered six sections, and 16 points including a final call:

"COP21 can be a turning point in history of humanity. This Forum calls for all stakeholders to work towards a successful COP21 to re-set the world towards low carbon and climate resilient development, consistent with 2° climate stabilization. We call for further strengthening the level of ambition and enhancing international support mechanisms for the post-2015 world. As the host of this key regional event that forms a small step toward a turning point for humanity, AIT is immensely satisfied with the outcome of the Forum. For what the 400+ participants from over 20 countries have acted over the past three days, we have a very good reason to anticipate a sustainable earth for tomorrow.”

AIT climate change expert Dr. Shobhakar Dhakal was quoted extensively in the international media when he delivered the plenary keynote speech on topic of “Future of Cities” at the International Conference on “Our Common Future Under Climate Change” held at UNESCO Headquarters between 7-10 July 2015 at Paris. Attended by nearly 3,000 experts, it was the world’s largest global conference on climate change before COP21. Dr Shobhakar’s remarks that over 70 per cent of global emissions are caused by energy use in cities, and that some of the biggest opportunities to put the world on a different pathway may lie in fast-growing cities was highlighted by over two dozen news publications.

Dr. Osamu Mizuni has taken over as the new Director of AIT's Regional Resource Centre for Asia and the Pacific (RRC.AP). He assumed office on 20 July 2015 following his secondment by Japan's Ministry of Environment (MOEJ) for a three-year term. In addition to his secondment, MOEJ will fund USD 1.2 million worth in 2015 for a number of projects, including capacity building activities under the Asia-Pacific Adaptation Network (APAN), of which RRC.AP has been a core technical partner since its inception. Prior to joining AIT, Dr. Mizuni was serving at the UN Secretary-General’s Advisory Board on Water and Sanitation (UNSGAB) based in New York City. RRC.AP was established in 1989 as a collaboration between AIT and the United Nations Environment Programme (UNEP).

FAO-AIT Regional Consultation on Urban and peri-urban agriculture Agricultural production in urban and peri-urban areas of Asia could help strengthen the future of food security and nutrition for the region’s growing urban populations.This was the message that emerged from the regional consultaFrom left: Prof. Sivanappan Kumar, Mr. tion on “Strengthening Food Hiroyuki Konuma, and Prof. Jayant Kumar Routray. and Nutrition Security of the Urban People through Urban and Peri-Urban Agriculture” which was jointly organized by the Food and Agriculture Organization (FAO) Regional Office for Asia and the Pacific (FAO-RAP) and AIT, with support from the AIT Disaster Preparedness, Mitigation and Management (DPMM) program on 14-15 July 2015. Mr. Hiroyuki Konuma, Assistant Director-General and Regional Representative, FAO-RAP, delivered the opening address, while Prof. Sivanappan Kumar, Vice President for Academic Affairs, AIT, welcomed the international participants. Prof. Jayant Kumar Routray, Co-organizer of the Regional Consultation, introduced the program objectives, where experts from 17 countries participated.

The cheque hand over ceremony at AIT.

AIT is home to 16 of the top 100 authors in Thailand ranked by publications produced in the field of environmental science from 2010 to 2014, according to Scopus, a leading bibliographic database owned by Elsevier. AIT has two scholars in the top five, seven in the top 20, and 13 in the first 50 list of authors. Prof. Mukand Singh Babel of the Water Engineering and Management is placed second among all academics working in Thailand, with a total of 42 publications during the period. Prof. Chettiyappan Visvanathan, Dean, School of Environment, Resources and Development is ranked fourth, and is AITâ&#x20AC;&#x2122;s most cited author in the field of environmental science, earning 222 citations overall at a rate of 5.7 citations per academic paper published.

Dr. Rajendra Shrestha has been promoted to the rank of a Professor, following the approval of the Board of the Trustees at its meeting held on 16 July 2015. A native of Nepal, Dr. Shrestha joined AIT in 2003 as an Assistant Professor in the Natural Resource Management (NRM) field of study at the AIT School of Environment, Resources and Development (SERD).

Summer camps at AIT During the summer break, AIT hosted educational camps for students from different countries. For the fifth year in succession, undergraduate students from United Group of Institutions (UGI) in India spent a good portion of their summer break at AIT learning about high-end technology and immersing themselves in the culture and society of Thailand. It attracted 81 students and two UGI faculty members to live and learn at AIT’s verdant campus for a fortnight. Another group of 27 students from Shanghai Ocean University (SOU) also attended a three-week summer program via AIT Extension.