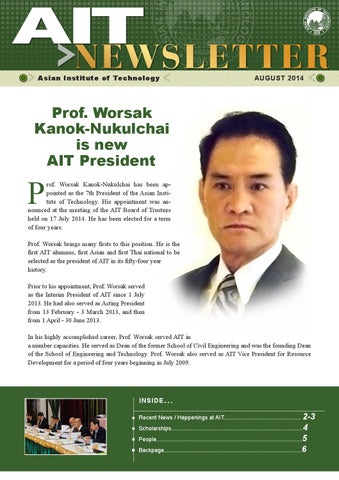 rof. Worsak Kanok-Nukulchai has been appointed as the 7th President of the Asian Institute of Technology. His appointment was announced at the meeting of the AIT Board of Trustees held on 17 July 2014. He has been elected for a term of four years. Prof. Worsak brings many firsts to this position. He is the first AIT alumnus, first Asian and first Thai national to be selected as the president of AIT in its fifty-four year history. Prior to his appointment, Prof. Worsak served as the Interim President of AIT since 1 July 2013. He had also served as Acting President from 13 February - 3 March 2013, and then from 1 April - 30 June 2013. In his highly accomplished career, Prof. Worsak served AIT in a number capacities. He served as Dean of the former School of Civil Engineering and was the founding Dean of the School of Engineering and Technology. Prof. Worsak also served as AIT Vice President for Resource Development for a period of four years beginning in July 2009.

NCPO approves AIT budget of 119 million Thai Baht Thailand’s National Council for Peace and Order (NCPO) has approved a budget of 119,153,000 Thai Baht from ‘The Central Budget for Cases of Emergency and Necessity’ for AIT. This approval will cover 49 His Majesty The King Scholarships, 25 Her Majesty The Queen Scholarships, 26 Greater Mekong Sub-region Academic and Research Network (GMSARN) Scholarships and 200 Royal Thai Government (RTG) Fellowships for the year 2014.

“The budget allocation is a strong signal to our other supporters and friends, indicating that AIT operations have been regularized, and they have entered a golden relationship with the host country,” Prof. Worsak said.

AIT will partner with the Government of France to stage an international scientific conference next year in Thailand, as a prelude to the COP 21 World Forum on Climate Change to be held in December 2015 in Paris, France.

AIT Chairman of the Board of Trustees H.E. Dr. Subin Pinkayan visited the campus on 15 July 2014 to learn first-hand about the Institute’s research work, prior to a planned trip to the United States to visit nine universities.

Mr. André de Bussy, France’s Regional Counsellor for Development in ASEAN based at the French Embassy in Jakarta, Indonesia, led a six-member delegation of French officials to AIT on July 25 to discuss preliminary details for cooperation on the event with the AIT President and senior institute officials, as a springboard for new partnerships and long term friendship. The global COP 21 forum hosted by France offers hope to the world on tackling climate change.

Accompanied by Board of Trustees member Dr. John D. Nelson, the chairman reviewed detailed presentations on research conducted at the three AIT Schools, and AIT Research Centers. The AIT delegation is currently on a fact-finding and learning mission to a number of top universities across America, including Colorado State University, New Mexico State University, University of Pennsylvania, MIT, Olin College, California Institute of Technology, Harvey Mudd College, Stanford University, and the University of California at San Diego.

A large group of 59 students and two faculty members from nine campuses of India’s United Group of Institutions (UGI) attended a two-week Summer Education Camp at AIT that underscored the institute’s solid connection with India.

The camp organized from 5-18 July 2014 exposed the third-year bachelor level engineering students to new technologies and innovations developed by AIT faculty members and other professionals. A special highlight for the UGI students was meeting India’s Ambassador to Thailand, H.E. Mr. Harsh Vardhan Shringla, who visited the campus on July 10 and personally addressed the students.

PASCO to offer scholarship to AIT student PASCO Corporation will offer tuition and registration fees for one candidate pursuing postgraduate studies at AIT. This was announced following the signing of a Memorandum of Understanding (MoU) by Dr. Tadashi Sasagawa, Vice President, PASCO Corporation with AIT on 7 July 2014. The MoU also envisages joint research between PASCO and AIT, and offering internships to AIT students. Signing the MoU, Dr. Sasagawa stated that the MoU has a five-fold purpose including capacity building for PASCO, obtaining human resource expertise from AIT, networking in the ASEAN region, collaborating with local companies, and offering scholarships.

AIT students from Myanmar, including offering the internship program in English.

Dr. Sununta Siengthai promoted as Professor Dr Sununta Siengthai has been promoted as Professor. Dr. Sununta was made full Professor following the approval of the Board of Trustees at its meeting held on 17 July 2014. Dr. Sununta joined AIT as an Associate Professor in the School of Management (SOM) in 1999. Dr. Sununta obtained her degrees of Ph.D. and M.A. in Labor and Industrial Relations from the Institute of Labor and Industrial Relations, University of Illinois at UrbanaChampaign, USA, in 1984 and 1979, respectively. She graduated from Chulalongkorn University, (Thailand) for her Bachelors of Arts in English in 1975.

Dr. Pennung Warnitchai, Leader of the Civil and Infrastructure Group, School of Engineering and Technology (SET), and Director of the Asian Center for Engineering Computations and Software, has been promoted to the rank of Professor. Dr. Pennung was made full Professor following the approval of the Board of Trustees at its meeting held on 17 July 2014.

Dr. Loc Thai Nguyen has joined as Assistant Professor in the Food Engineering and Bioprocess Technology (FEBT) Field of Study in AIT’s SERD from 1 July 2014. Before joining AIT, he was working as Researcher, Laboratory of Biomedical Nanomaterials, Institute of Materials Science, VietNam Academy of Science and Technology. Dr. Loc completed his Ph.D. in Food Science and Technology from The Ohio State University, USA in 2009. He obtained his Master’s in Science (M.Sc.) in FEBT from AIT in 2005, and Bachelor’s in Science (B.Sc.) in Food Technology from Can Tho University, Vietnam in 1997.

Dr. P. Abdul Salam of the Energy field of study in AIT’s School of Environment, Resources and Development (SERD) has been promoted to the rank of Associate Professor. Dr. Salam joined AIT as an Assistant Professor in October 2009.

Dr. Salam obtained both his Doctor of Engineering and Master of Engineering degrees (in Energy Technology) from AIT in 2005 and 1994, respectively. He graduated from the University of Paradeniya, Sri Lanka in 1991 with a Bachelor of Science in Mechanical Engineering.

63 students from 16 countries across 3 continents​graduate from AIT​ Sixty-three students hailing from 16 countries across Asia, Africa and South America graduated at the Inter Semester Graduation ceremony organized on 30 July 2014. Congratulating the graduands, Prof. Kanchana Kanchanasut, Interim Vice President for Research, hoped that the students would maintain a spirit of camaraderie and friendship, and will contribute in their careers towards the well being of humanity. Out of the 63 graduands, 17 were from Thailand; nine from Myanmar; seven from Indonesia; six from Sri Lanka; four each from Pakistan and People’s Republic of China; and three from Vietnam. Afghanistan, India, Nepal, and Timor-Leste with two graduands each; and Argentina, Bangladesh, Lao PDR, The Philippines, and Tanzania with one each were the other countries of origin of the graduating students.

From Doda to Bangkok: a two-year diary of an achiever A young man leaves home and family to pursue a dream. Leaving his wife and three-year old son behind, he embarks on his anointed journey. Gushing family emotions and sobs do not deter him. With a mere 50 dollars in his pocket, he boards the flight, proceeding on a journey which he had earlier dreamt of. No, this is not around the world in eighty days. But it is the journey of a young Kashmiri who wants to pursue his dream of studying at an elite institution abroad. This is ala Jules Verne; a story by Nasir Faridi, an AIT alumnus, who has now penned two-years of his experience at AIT in a new book titled “Away in the land of smiles: An AITan’s Diary.” Read more at this link: http://www.ait.ac.th/news-and-events/2014/news/from-doda-to-bangkok-atwo-year-diary-of-an-achiever/#.U9iwcRbAh7E

August 2014 edition of the monthly Newsletter of the Asian Institute of Technology (AIT).

August 2014 edition of the monthly Newsletter of the Asian Institute of Technology (AIT).