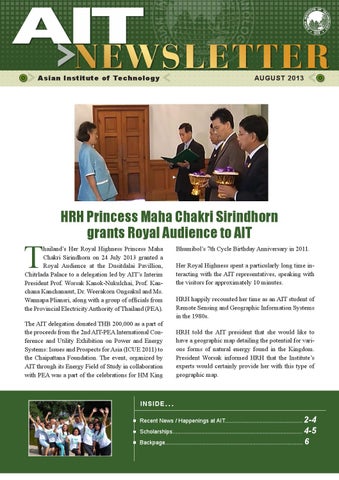 hailand’s Her Royal Highness Princess Maha Chakri Sirindhorn on 24 July 2013 granted a Royal Audience at the Dusitdalai Pavillion, Chitrlada Palace to a delegation led by AIT’s Interim President Prof. Worsak Kanok-Nukulchai, Prof. Kanchana Kanchanasut, Dr. Weerakorn Ongsakul and Ms. Wannapa Pliansri, along with a group of officials from the Provincial Electricity Authority of Thailand (PEA). The AIT delegation donated THB 200,000 as a part of the proceeds from the 2nd AIT-PEA International Conference and Utility Exhibition on Power and Energy Systems: Issues and Prospects for Asia (ICUE 2011) to the Chaipattana Foundation. The event, organized by AIT through its Energy Field of Study in collaboration with PEA was a part of the celebrations for HM King

Bhumibol’s 7th Cycle Birthday Anniversary in 2011. Her Royal Highness spent a particularly long time interacting with the AIT representatives, speaking with the visitors for approximately 10 minutes. HRH happily recounted her time as an AIT student of Remote Sensing and Geographic Information Systems in the 1980s. HRH told the AIT president that she would like to have a geographic map detailing the potential for various forms of natural energy found in the Kingdom. President Worsak informed HRH that the Institute’s experts would certainly provide her with this type of geographic map.

Chief Guest Speaker H.E. Dr. Subin Pinkayan (WRE â&#x20AC;&#x2122;61) said he was pleased that the event focused on how AITâ&#x20AC;&#x2122;s technology could benefit the business sector. Interim AIT President Prof. Worsak Kanok-Nukulchai welcomed attending members of the diplomatic community and delegates and thanked AIT Consulting Executive Director Dr. Naveed Anwar for organizing the event that specifically reaches out to industry. The President told the audience that the storied history of AIT is one of technology and development. Offering numerous examples of how AIT technology is impacting the region, such as mass transit systems in Bangkok and around Asia, he stated that AIT aims to reach out more to industry with its considerable research.

Professor Emeritus Dr. Sahas Bunditkul, Chairman of the Executive Committee of the AIT Board of Trustees and former Deputy Prime Minister of Thailand, along with Prof. Worsak Kanok-Nukulchai, Interim President, led an AIT delegation on an official visit to Nepal from 18-20 July 2013.

The AIT delegation called on the President of Nepal, Rt. Honorable Dr. Ram Baran Yadav, whose son is also an AIT alumnus. The delegation paid a courtesy call on the Rt. Honorable Mr. Khil Raj Regmi, Chairperson of the Interim Election Government (Interim Prime Minister), who thanked AIT for playing an important role in the country and region. This was followed by a meeting with the Nepal Foreign Minister and AIT alumnus H.E. Mr. Madhav Prasad Ghimire, who gave his assurances in expediting the launch of the inaugural two scholarships, as well as for the replenishment of the AIT Nepalese Local Currency Fund.

Japan Aerospace Exploration Agency (JAXA) continues to support AIT, and as a latest step in its ongoing partnership announced a three-year secondment of Dr. Shinichi Nakamura. A delegation of JAXA headed by Mr. Toru Sasaki, Director, Bangkok Office visited AIT on 17 July 2013 to introduce Dr. Nakamura. Prof. Worsak Kanok Nukulchai, Interim President, AIT, while welcoming the delegation remarked that Japan has been one of the generous supporters of AIT during the past 54 years. He added that former AIT faculty from Japan constitute a very strong network who have always helped AIT. Dr. Nakamura, who specializes in astrodynamics, flight dynamics and satellite mission design, delivered a brief presentation on his ideas for educational and research activities during his three-year assignment at AIT. He also elaborated on the small-satellite project.

modation and bursary. Final review of the scholarship awardees was made at a meeting on 17 July 2013 involving the presence of Ms. Chadarat Singhadechakul, Director, Bureau of International Cooperation Strategy, Office of the Higher Education Commission (OHEC), Thailand. Of the 66 final scholarship awardees, 28 are Thai and 38 hail from 11 countries, including Bhutan. The soon-to-be AIT students include 36 females and 30 males. Scholarship awardees are from Bangladesh, Bhutan, Cambodia, India, Lao PDR, Myanmar, Nepal, Pakistan, Philippines, Sri Lanka, Thailand, and Vietnam.

The students were warmly welcomed by the Interim President Prof. Worsak Kanok-Nukulchai; Acting Dean of the School of Environment, Resources and Development (SERD) Prof. Chettiyappan Visvanathan; Acting Dean of the School of Engineering and Technology (SET) Dr. Nitin Kumar Tripathi and Mr. Erik Svedahl, Minister Counsellor of the Norwegian Embassy, Bangkok. “Your country needs you, your skills and expertise. You are the future,” Mr. Svedahl told the Myanmar group, greeting the students in their own language and later meeting with them individually and as a group.

Panya Consultants Co., Ltd, a well-known Thai company owned by AIT alumni, on 2 July 2013 pledged to fund two academic scholarships for students to attend fields of study at AIT School of Engineering (SET). Three executives of the company led by its Managing Director Mr. Supachai Rakpanitmanee (WEM ‘84); Executive Director, Mr. Anuthep Chaovanalikit (SEC ‘82); and Deputy Executive Director, Mr. Chom Tantitamtaworn (SEC ‘83) visited the campus on July 2 to confirm their support to Prof. Worsak Kanok-Nukulchai on the occasion of his assuming the Interim Presidency of AIT. Panya Consultants representatives also offered to help carry out a feasibility and financial plan for the rehabilitation and upgrade of all campus residential buildings, which were left damaged by the flood of October 2011.

SPS Global, a company established by an AIT handed over an USD 8000 cheque to the AIT Interim President Prof. Worsak Kanok-Nukulchai to support the tuition fee of one student at AIT’s School of Environment, Resources and Development (SERD) in a brief ceremony held on 12 July 2013.Earlier, a formal agreement to award the scholarship was signed on 28 June 2013 by Managing Director of SPS Global Corporation, Dr. Soontorn Piromsartkoon, and the AIT Interim President, Prof. Worsak Kanok-Nukulchai.

AITAA -Nepal donates to library On July 19, the AITAA-Nepal handed over to Interim President Prof. Worsak Kanok-Nukulchai the second installment of its overall contribution to the rehabilitation of the AIT campus. The USD 4,839 from AITAANepal is earmarked for the AIT library renovation.

1 Master) have already been offered to two students, one from India and the other from Nepal, in January 2013 Semester.

The pledge is the annual contribution from the Government of Japan for the year 2012. The scholarships will enable one Doctoral student and one Master student to study Remote Sensing and Geographic Information Systems at AIT’s School of Engineering and technology (SET). Two scholarships (1 Doctoral and

Since 1969, Japan has been a substantial partner donor to AIT, providing considerable financial support for academic scholarships and campus infrastructure works. To date, 931 students from 30 different countries across Asia have earned graduate degrees courtesy of scholarships provided by the Government of Japan.

59 students from India’s United Group join AIT for summer program Fifty-nine students and two faculty members from United Group of Institutions, India joined AIT on 8 July 2013 for a fortnight-long summer program to experience the innovative education and research offerings at AIT. Welcoming the students, AIT’s Interim President Prof. Worsak Kanok-Nukulchai remarked that two factors make AIT a truly unique institution – its academic excellence which is relevant to the region, and its internationality. Dr. Nitin Kumar Tripathi, Acting Dean, School of Engineering and Technology, AIT stated that the summer program follows the signing of a Memorandum of Understanding (MoU) between AIT and the United Group of Institutions. The pro-

gram is now in its third year and it has grown from a small batch of 30 students to 61 students this year.

The New York Times writes: The long enrollment boom that swelled American colleges — and helped drive up their prices — is over, with grim implications for many schools. College enrollment fell two percent in 2012-13, the first significant decline since the 1990s, but nearly all of that drop hit for-profit and community colleges; now, signs point to 2013-14 being the year when traditional four-year, nonprofit colleges begin a contraction that will last for several years. The college-age population is dropping after more than a decade of sharp growth, and many adults who opted out of a forbidding job market and went back to school during the recession have been drawn back to work by the economic recovery. Read the entire story at this link: http://goo.gl/YMFQSI