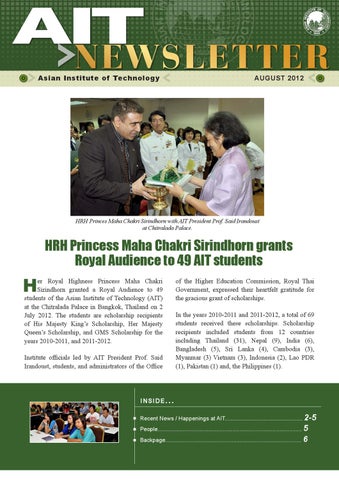 er Royal Highness Princess Maha Chakri Sirindhorn granted a Royal Audience to 49 students of the Asian Institute of Technology (AIT) at the Chitralada Palace in Bangkok, Thailand on 2 July 2012. The students are scholarship recipients of His Majesty Kingâ&#x20AC;&#x2122;s Scholarship, Her Majesty Queenâ&#x20AC;&#x2122;s Scholarship, and GMS Scholarship for the years 2010-2011, and 2011-2012. Institute officials led by AIT President Prof. Said Irandoust, students, and administrators of the Office

AIT alumnus honored by HRH Princess Maha Chakri Sirindhorn Her Royal Highness Princess Maha Chakri Sirindhorn, as the Representative of His Majesty the King Bhumibol of Thailand, conferred the National Outstanding Person (Science and Technology) pin to Prof. Somchai Wongwises, an alumnus of AIT. Prof. Somchai, who completed his Master’s in Energy Technology from AIT in 1984, is one among four National Outstanding Persons who was conferred the award by HRH Princess Sirindhorn at Chitralada Palace. Later, at a press conference held on 12 July 2012 at the Government House, Prof. Somchai and other award recipients

40 Myanmar students arrive at AIT under Norwegian scholarship Forty new postgraduate students from Myanmar under a landmark scholarship program of the Norwegian Ministry of Foreign Affairs (NMFA) kicked-off their academic careers at AIT by attending a special orientation program on 16 July 2012. The enthusiastic students were welcomed by senior AIT officials, who saw the unveiling of the program as an historic occasion which would help AIT strengthen its ties with Myanmar, particularly in the field of education, research and outreach. The NMFA scholarship at AIT is one of the largest scholarship programs benefitting students from Myanmar at any institute in the world. Funded by the Ministry of Foreign Affairs of the Royal Nor-

wegian Government, the program will run for three years. The Government of Norway will provide 30 million NOK (around 160 million THB) for these scholarships.

I still follow AIT’s mission: distinguished alumnus Distinguished alumnus and AIT Hall of Fame inductee Mr. George S.Y. Chen stated this month that he still continues to follow AIT’s mission and vision. Visiting the Institute on 12 July 2012 in connection with his study on developments in urban transportation in Asia, Mr. Chen is exploring a possible collaboration with AIT. Mr. Chen, an alumnus of 1972, who is the Division Convenor, Sustainable Development Division, National Policy Foundation, Taiwan, is undertaking a transportation survey and urban development in various Asian cities. The study, while gathering information on Asian urban transportation development, will also prepare an information database and a comparative analysis. “I wish to share all this work throughout Asia, which is in tune with AIT’s mission,” he remarked during his visit to his alma mater.

A mother’s gratitude to her son’s alma mater

Among the touching stories in AIT’s post-flood recovery was one on 18 July 2012, when a proud mother of an AIT alumnus arrived at the AIT campus with a 100,000 THB donation to help the Institute. Ms. Chomchai Morya, mother of Mr. Kewin Morya, a graduate from Energy Technology (1998) who is currently working in Brunei, made the donation on behalf of her son to give to his alma mater. “I asked my son to do something for AIT,” the proud mother recalled. The Institute needs help and it is time to take action, she averred. Mr. Kewin, who too had been thinking about AIT, expressed his gratitude to his alma mater crediting it for his successful career. “I do not want my school to be forgotten,” the son told his parents as he pledged a donation.

TIS launches training program on instructional design Tata Interactive Systems (TIS), India, has launched a training program on instructional design to help development of online courseware. InauguMr. Vinay Kumar rating the three-day Vishwanath workshop on 16 July 2012, Executive Director, AIT Extension, Dr. Jonathan Shaw remarked that the workshop would pave the way for more e-learning initiatives. Leading the workshop was Mr. Vinay Kumar Vishwanath, Senior Specialist, Instructional Design, TIS, who traced the outline of development of e-courseware. Dr. Sundar Venkatesh, Advisor, AIT Extension said that while the training is a part of the online course development for the Professional Master’s in Banking and Finance (PMBF), the workshop seeks to train everyone in various aspects of instructional design.

AIT and CSR Asia renew partnership for ten more years Hong Kong based CSR Asia Ltd. and AIT have agreed to extend their existing partnership for the next ten years. A memorandum of understanding (MoU) signed on 25 July 2012 by CSR Asia Chairman Prof. Richard Welford and AIT PresiProf. Richard Welford (left) with dent Prof. Said Irandoust faciliProf. Said Irandoust. tates the continued joint delivery of graduate degree programs, research and consultancy services and continuing professional education in corporate social responsibility (CSR). Signing the MoU at the AIT main campus, President Irandoust said he looked forward to the next phase of partnership which began with the launch of the joint venture CSR Asia Center at AIT in March 2010. A highlight of the renewed agreement is the continued delivery of the Professional Masters Program in CSR (PMCSR) at the CSR Asia Center at AIT.

University of North Texas to open office in Bangkok, seeks partnership University of North Texas will be opening an office in Bangkok in January 2013. Given UNTâ&#x20AC;&#x2122;s foray into Thailand, it seeks to partner with AIT, particularly in the field of engineering and management. On a visit to AIT on 3 July 2012, Prof. Kuruvilla John, Associate Dean of Research and Graduate Studies, and Prof. Marilyn K. Wiley, Senior Associate Dean, College of Business, UNT, stated that they were keen to initiate exchange programs involving both student and faculty, besides double degree, collaborative and sandwich programs.

Students from United Group at AIT.

Forty-four students from two institutes run by the United Group of Institutions, India, arrived at AIT for a two-week summer training program beginning 10 July 2012. The students, who belong to computer science and management streams, came from the United College of Engineering and Research, Noida, and United Institute of Technology, Allahabad, both located in the Indian province of Uttar Pradesh. Addressing the students, Dr. Nitin V Afzulpurkar, Dean, School of Engineering and Technology (SET), stated that AIT and Thailand offer a lot to learn for the visiting students. The students visited the National Science and Technology Development Agency (NSTDA), Kung Krabean Bay Royal Development Study Center, National Science Museum, and the Grand Palace.

NUST for joint programs with AIT

National University of Sciences and Technology (NUST), Islamabad, Pakistan wishes to launch joint programs with AIT, particularly in the field of Geographical Information Systems (GIS), disaster management, business administration, and in the field of professional development. This was stated by Dr. Ashfaque H. Khan, Director General and Dean, NUST Business School, in a meeting with senior AIT officials on 5 July 2012.

Dr. Khan said that both institutes can contribute towards betterment of Pakistan and Asia as a whole. He stated that discussions for a joint program in GIS are at an advanced stage. Dr. Khan also offered to send students to AITâ&#x20AC;&#x2122;s School of Management (SOM) for periods ranging between one to two semesters.

Ahmed Amjad Ali is new Head, ERCO Mr. Ahmed Amjad Ali, an officer of the Foreign Service of Pakistan has been appointed as the new Head, External Relations and Communications Office (ERCO). He assumed office on 10 July 2012.

Prior to this assignment, Mr. Ali was serving as Deputy Chief of Mission, Head of Chancery, and Deputy Permanent Representative to UNESCAP of Embassy of Islamic Republic of Pakistan to Thailand.

Insurance Co to release Bt. 217.4 Million to AIT for flooddamaged buildings AIT will receive Baht 217.4 Million (approximately U.S. $ 7 million) in flood compensation from Dhipaya Insurance Public Co. Ltd. by September 15 this year, almost eleven months after the campus was inundated on October 21, 2011. AIT received the first installment of Bt. 30 million on July 15. The Institute is still waiting for settlement on its claim for damages to equipment. The financial settlement on AIT’s flood claim will be disbursed in monthly payments in July, August and September and is to be spread across five installments.

You AIT Story Everyone, they say, has a story to tell. To reach out and connect AIT students, the media team of the AIT Student Union has just launched a new initiative called Your AIT Story. Every week SU staffers roam the campus on the lookout for interviews to shine a spotlight on their fellow students. The first story published on 3 July 2012 was about Ms. Ploy who “fought as a Thai warrior in the cultural show and is fascinated about skydiving.” The second story is about Mr. Poorna who is “cute in a serious way.” Read all stories at these links: http://youraitstory.tumblr.com/ or https://www.facebook.com/YourAitStory

Education Indicators in Focus = 40 percent of young postsecondary degree-holders in leading countries will come from China and India by 2020. The United States and European Union countries will produce about 25 percent. = Across 25 OECD countries, the long-term economic advantage to an individual of having a tertiary degree instead of an upper secondary degree is over USD 175 000 for a man and USD 110 000 for a woman. = The net return to taxpayers on the public costs of supporting a man in higher education is over USD 91 000, and the return for supporting a woman in higher education is over USD 55 000, on average across OECD countries. Read more in Education Indicator Focus released by OECD http://www.oecd-ilibrary.org/education/education-indicators-in-focus_22267077 And if you wish to know how education pool in 2020 will look like, take a look at this graphic http://oecdeducationtoday.blogspot.fr/2012/05/what-will-global-talentpool-look-like.html