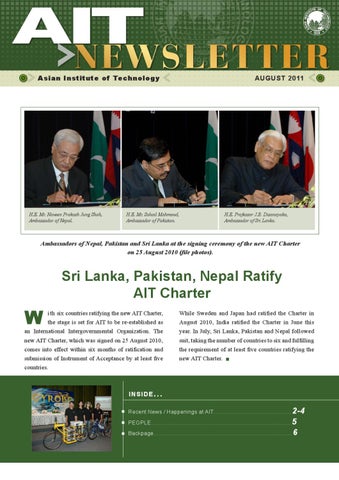 Ambassadors of Nepal, Pakistan and Sri Lanka at the signing ceremony of the new AIT Charter on 25 August 2010 (file photos).

ith six countries ratifying the new AIT Charter, the stage is set for AIT to be re-established as an International Intergovernmental Organization. The new AIT Charter, which was signed on 25 August 2010, comes into effect within six months of ratification and submission of Instrument of Acceptance by at least five countries.

The Creative Partnership is intended to streamline existing Thai-U.S. business and government efforts in innovation; increase research and university exchange; and build beneficial bridges between the private sector and academia.

United Nations Economic and Social Commission for Asia and the Pacific (ESCAP) is interested in developing Green Growth Capacity Development Training Modules along with AIT. In a meeting at AIT on 6 July 2011, a delegation including Dr. Aida Karazhanova, Head, Institutional Support Component, AIT-UNEP Regional Resource Centre for Asia and the Pacific (RRC.AP), Ms. Maria Tomovic, Green Business and Sustainable Development Consultant, Environment and Development Policy Section (EDPS), UNESCAP, Mr. Kenan Mogultay, and Ms. Pitchayanin Sukholthaman, highlighted the Green Growth Capacity Development Programme (GGCDP). Ms. Tomovic remarked that the GGCDP is aimed at policymakers in Southeast Asia, Central Asia and the Pacific. It has three components, namely training of trainers, pilot projects and e-learning. Dr. Aida Karazhanova said it was an opportunity for AIT to brand itself together with ESCAP. The venture has excellent co-branding potential, she added.

AIT Featured among Six Successful Knowledge Environments AIT has been featured by the Swedish publication Kampen om Hjärnorna, as one of the six educational institutes that possess a successful knowledge environment. AIT, along with University of Geneva and University of Zurich, Switzerland; University of Melbourne, Australia; University of Minnesota, USA; and Technical University, Munich; was chosen for its ability to create a knowledge environment which is successful in attracting international students and furthering knowledge. “Green campus becomes a knowledge hub” is how journalist Ms Linda Karl Sson Eldh describes AIT. AIT’s internationality is also mentioned in the article. Sixty per cent of AIT’s students come from abroad, and an international climate pervades its entire premises, she says. AIT is also home to several international organizations and NGOs, since it is a politically neutral platform. Quoting AIT President, Prof. Said Irandoust, she describes AIT as a green campus which is a stone’s throw away from Bangkok’s concrete jungle.

AIT among UNESCO-IHE Partners in Gates Foundation Project AIT is among the eight partners of UNESCO-IHE Institute for Water Education, which has been awarded a US$8 million grant from the Bill & Melinda Gates Foundation. Spread over five years, the grant is targeted at education and research in postgraduate programs with a focus on solutions for the urban poor in sub-Saharan Africa and Southeast Asia.

President’s Article Published in Bangkok Post An article on University rankings co-authored by AIT President Prof. Said Irandoust, and ASEAN Regional Center of Excellence on Millennium Development Goals (ARCMDG) Director Dr. Sandro Calvani was published in the newspaper the Bangkok Post on 29 July 2011. The article is titled “Do university rankings truly measure up?”

a feel-good news item published in The Nation newspaper trumpets that 5 Thai universities were ranked among the top 100 in the QS Asian University Rankings 2011. Turn the pages of the Bangkok Post, however, and the editorial “Get real about bad education” laments the sorry state of quality at the country’s colleges and universities......Read the entire article at this link:

“It is May 27, 2011 and two media reports about Thai higher education tell very opposite stories. On one hand,

AIT to Help Build Capacity in Maldives Civil Service Commission (CSC) of the Republic of Maldives has signed a Memorandum of Understanding (MoU) to create more capacity among civil servants to pursue public sector reform initiatives. The MoU was signed by Mr. Mohammed Fahmy Hassan, Chairman of Maldives CSC, and Prof. Sudip Kumar Rakshit, Vice President for Research, AIT, on 25 July 2011. The MoU aims to facilitate staff exchange programs, training of trainers and offer of professional degree and certificate programs. Prof. Sudip Kumar Rakshit (left) and Mr. Mohammed FahAIT experts will visit Maldives to offer management and training my Hassan consultancy services. AIT will also encourage Doctoral and Master’s level research in areas of relevance to Maldives. AIT Extension will despatch a fact-finding mission to Maldives to determine the capacity development needs of various ministries in the country.

National Economics University Explores Partnership with AIT National Economics University (NEU), Vietnam wishes to partner with AIT, including the possibility of offering joint educational programs. A twenty-six-member strong delegation from Ms. Wannapa Pliansri (left) with Prof. Truong NEU visited AIT’s Dinh Chien School of Management (SOM) on 13 July 2011, and sought its help in curriculum development in the field of marketing. Led by Prof. Truong Dinh Chien, Dean, Faculty of Marketing, the delegation inquired about the possibility of a unified Bachelor-Master program, and AIT faculty visits to NEU. The visitors explored possible collaboration on marketing curriculum development and attended a training course on “Methodologies in Developing Electronic Teaching Materials” provided by AIT Extension. Dr. Le Viet Thuy, Head of Training Management, said NEU was keen to develop collaborative programs with AIT. He added that NEU, which was established in 1956, has 45,000 students enrolled in various programs. “Every year 4,000 Bachelor’s and 1,000 Master’s students graduate from NEU,” he added. Dr. Thuy also expressed a keen interest in faculty development programs.

AIT Alumnus Prof. Yew-Chaye Loo Honored in China AIT alumnus Professor Yew-Chaye Loo (M.Eng., 1968) of Australia has been awarded the honorary title of “The World Chinese Top 10 Enterprising Pioneer”. Prof. Loo, who is the Foundation Chair of Civil Engineering at Griffith University, Queensland, Australia, received the honor at a ceremony at the National People’s Congress Conference Centre, Beijing, China. The award is intended for persons of Chinese descent.

Dr. Shrestha’s Book Released A book titled “Land Use, Climate Change and Biodiversity Modeling: Perspectives and Applications” coedited by an AIT faculty member, Dr. Rajendra P. Shrestha, has been released by IGI Global. The book focuses on how the earth and its life forms are affected by human use of land. Combining modelling approaches with case studies from all across the world, the book concludes that biodiversity loss and climate change are consequences of inappropriate land use practices, among others. The book is jointly edited by Dr. Yongyut Trisurat of Kasetsart University, Thailand; Dr. Rajendra P. Shrestha of AIT; and Dr. Rob Alkemade of Netherlands Environment Assessment Agency, The Netherlands. Commenting on the book, Dr. Shrestha said that the book contains rich examples from around the world which will be of value to resource

AIT Alumnus Awarded Prof. Murugesu Sivapalan, an AIT alumnus who received his M.Eng. in Water Resources Engineering in 1977, was selected by the American Geophysical Union as the 2011 AGU Robert E. Horton Medalist in recogniProf. M. Sivapalan tion of his “fundamental contributions to the science of hydrologic predictions at the watershed scale”. This is the highest and most prestigious award for hydrology, worldwide, awarded for outstanding contributions to hydrology.

managers, scientists, graduate students as well as decision makers. The case studies demonstrate how to translate models into results, and illustrate how a pro-active implementation can mitigate biodiversity loss, he added.

Dr. Nicholas J. Dimmit, Academic Coordinator, School of Management (SOM) has left AIT effective from 1 August 2011. Dr. Dimmitt earned his doctoral degree from the University of Southern California. Dr. Dimmitt has been teaching at AIT since 1995. He has been a faculty member at SOM since 2001.

ample the excellent academic cooperation between AIT, universities in Thailand, and the private sector.”

The three partners announced details of the event a national-level press conference at AIT on July 21. BicyRobo Thailand Championship is a competition to build a bicycle robot which is able to balance itself while navigating along a predefined path. The second annual contest will be hosted at the Bangkok Racing Circuit, Thailand, in early 2012. Expressing delight with AIT’s role in the annual event, Prof. Worsak Kanok-Nukulchai, AIT Vice President for Resource Development, said “The BicyRobo Thailand Championship is a good ex-

Advertising for Work Looking for a job? Well, people try interesting concepts to achieve their aims. In Yorkshire (UK), the city council fined a person for putting up 200 poster sized CV’s all over town. The applicant was quoted in the Yorkshire Post expressing his shock and anger at “getting punished for looking for a job.” http://www.yorkshirepost.co.uk/news/at-a-glance/main-section/council_fines_jobseeker_75_ for_advertising_himself_for_work_1_3567599

Another jobless person in Ireland spent his savings to book a public hoarding. Unlike the unluckly Yorkshire resident who was fined, this person got 20 job interviews and many job offers. Editor: Bajinder Pal Singh bajinder@ait.asia Designer: Nadhika Mendhaka Photos: Paitoon Tinnapong For feedback, contact Media and Communications Unit at AIT mcu@ait.asia

Mashable reports of an applicant who used a QR (Quick Response) code on his CV, which links to his video. http://mashable.com/2011/04/26/qr-code-resume/