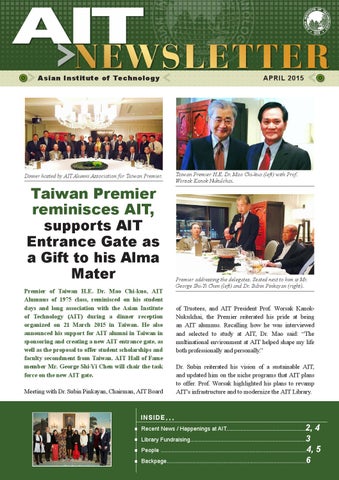 Taiwan Premier reminisces AIT, supports AIT Entrance Gate as a Gift to his Alma Mater Premier of Taiwan H.E. Dr. Mao Chi-kuo, AIT Alumnus of 1975 class, reminisced on his student days and long association with the Asian Institute of Technology (AIT) during a dinner reception organized on 21 March 2015 in Taiwan. He also announced his support for AIT alumni in Taiwan in sponsoring and creating a new AIT entrance gate, as well as the proposal to offer student scholarships and faculty secondment from Taiwan. AIT Hall of Fame member Mr. George Shi-Yi Chen will chair the task force on the new AIT gate. Meeting with Dr. Subin Pinkayan, Chairman, AIT Board

Premier addressing the delegates. Seated next to him is Mr. George Shi-Yi Chen (left) and Dr. Subin Pinkayan (right).

of Trustees, and AIT President Prof. Worsak KanokNukulchai, the Premier reiterated his pride at being an AIT alumnus. Recalling how he was interviewed and selected to study at AIT, Dr. Mao said: “The multinational environment at AIT helped shape my life both professionally and personally.” Dr. Subin reiterated his vision of a sustainable AIT, and updated him on the niche programs that AIT plans to offer. Prof. Worsak highlighted his plans to revamp AIT’s infrastructure and to modernize the AIT Library.

The citation announcing the award of Honoris Causa reads: “For his

wisdom and dedication, as a scholar and top administrator of an in-

May Sabe Phyu (third from left) at the White House with the US First Lady Michelle Obama.

AIT alumna Ms. May Sabe Phyu, was among the 10 select women awarded the 2015 Secretary of State’s International Women of Courage Award. She was awarded by Deputy Secretary Heather Higginbottom at the U.S. Department of State in Washington, D.C., on 6 March 2015. Later, Ms. Phru and other winners also met the US First Lady Michelle Obama. May Sabe Phyu, who hails from Myanmar, was a recipient of the Japanese government scholarship to pursue her Master’s degree at AIT. She graduated with a Master’s in Gender Studies in May 2011. Source: Official White House Photo by Chuck Kennedy

ternational institute with the noble goal to foster international cooperation in this Asian Century, Sam Higginbottom Institute of Agriculture, Technology and Sciences (SHIATS) is proud to name Professor Worsak Kanok-Nukulchai Honoris Causa Doctor of Science (D.Sc.).” The entire citation can be read at this link: http://www.ait.ac.th/news-andevents/2015/news/citation. worsak.pdf

March 2015. Mr. Choi stated that four water-related issues are currently under focus ̶ flooding, drought, water quality, and futuristic water issues related to climate change. Discussing the establishment of a water center and network, Mr. Choi stated that K-Water was keen to have a professional water-related institute, and K-Water was discussing the issue with the Asian Development Bank (ADB), and other organizations, including AIT.

Photo Gallery of some of the donations in March 2015

Mitsubishi Rayon provides diploma program scholarship for staffer Japan’s Mitsubishi Rayon Co., Ltd. (MRC) will send one of its employees to earn a one-year diploma in the Environmental Engineering Management (EEM) program at AIT starting in August 2015. The scholarship will cover tuition fees, accommodation and all associated expenses for the selected student, and is valued at 560,000 Baht. MRC’s scholarship was made possible by agreements inked on 12 March 2015. Signing on behalf of Mitsubishi Rayon was Yasuo Yanagi, Director, Aqua Technology Administration Department, MRC.

AIT is an important partner: UNESCO-IHE Vice Rector “AIT is an important partner for us, and we are eager to intensify our collaboration”. This was the sentiment expressed by Prof. Stefan Uhlenbrook, Vice-Rector, Academic and Student Affairs, UNESCO-IHE Institute for Water Education, at AIT on 20 March 2015. Appreciating the partnership with AIT, Prof. Stefan remarked that AIT is a regional institute in Asia enjoying a global reach. He added that out of the four joint degree programs offered by UNESCO-IHE, three were being offered with AIT. Later, Prof. Stefan delivered a lecture on “Water-Spider in the Water-EnergyFood Nexus” to AIT students of Water Engineering and Management (WEM) field of study.

Dr. Peeyush Soni promoted to the rank of Associate Professor

Dr. Peeyush Soni has been promoted to the rank of Associate Professor in the School of Environment, Resources and Development (SERD). This was announced by AIT President Worsak Kanok-Nukulchai on 16 March 2015 following positive recommendations of the Faculty Evaluation Panel (FEP) and the SERD Professorial Board. Dr. Soni joined AIT as an Assistant Professor in June 2012. Prior to this, he held the Senior Instructor/ Instructor positions from September 2010 to May 2012. Dr. Soni obtained both his Master of Engineering (Agriculture) and Doctor of Engineering (Agriculture) degrees from AIT in 2003 and 2006, respectively. He earned his Bachelor of Engineering from the College of Technology and Engineering, Udaipur (India) Maharana Pratap University of Agriculture and Technology, (MPUAT), Rajasthan, India in 2001.

AIT students present their work in France Two AIT students, Mr. Aung Ye Htut (Myanmar) and Mr. I Putu Santikayasa (Indonesia) presented their work at the ASEAN-EU Science Technology and Innovation Days (STI Days) organized Mr. Aung Ye Htut (left) and Mr. I in Paris, France from 16-20 Putu Santikayasa. March 2015. Both students were recipients of the best paper award. While Mr. Aung presented his paper on “Uncertainties in SWAT extreme flow simulation under climate change of the Bago River Basin in Myanmar,” Mr. Putu presented his findings on “Climate change impacts on hydrology and rice production in Northeast of Thailand.”

“Dummy police will catch traffic offenders red-handed next month” is an article in The Nation (Thailand). The system was developed by Dr. Mongkol Ekpanyapong of AIT. This development was mentioned by numerous newspapers and media houses in Thailand.

It can be read at this link: http://www.nationmultimedia.com/national/Dummypolice-will-catch-traffic-offenders-redhand-30256694.html

April 2015 edition of the monthly newsletter of the Asian Institute of Technology (AIT).

April 2015 edition of the monthly newsletter of the Asian Institute of Technology (AIT).