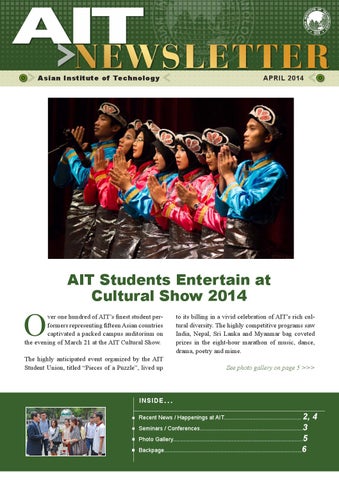 ver one hundred of AIT’s finest student performers representing fifteen Asian countries captivated a packed campus auditorium on the evening of March 21 at the AIT Cultural Show. The highly anticipated event organized by the AIT Student Union, titled “Pieces of a Puzzle”, lived up

AIT calls on French Ambassador to Thailand France’s Ambassador to Thailand H.E Mr. Thierry Vitau on 20 March 2014 said he would continue to support AIT “in heart and mind” and “through the promotion of collaboration with French universities and institutions.” The ambassador made the comment at a meeting with Chairman of the AIT Board of Trustees H.E. Dr. Subin Pinkayan and Interim President Prof. Worsak KanokNukulchai, who led an AIT delegation to the French Residence, Bangkok. Ambassador Viteau was joined at the meeting by Mr. Sylvain Fourriere, Deputy Head of Mission, and Mr. Stephane Roy, Attaché for Scientific and Higher Education Cooperation.

AIT is a ‘perfect platform’ in this region: Colombian Ambassador

Describing AIT as a “perfect platform” in the region, the Ambassador of Colombia to Thailand H.E. Mr. Andelfo Jose Garcia Gonzalez, stated that there are multiple opportunities for cooperation between AIT and Colombia. On his maiden visit to AIT on 19 March 2014, the Ambassador expressed his desire that Colombia can be a networking partner for AIT to forge relationships in South America as it can “provide a platform to AIT for reaching out to the continent.” Mr. Leonardo Carvajal Hernandez, Minister Plenipotentiary of the Embassy of Colombia to Thailand, also accompanied the Ambassador.

Ten officials from DPR Korea undergo four-week program Ten engineers and transport officials from the Democratic People’s Republic of Korea participated in a UNESCAPsupported training program on “Road DPRK officials at the AIT training Safety and program. Traffic Management” at AIT from 10 February – 6 March 2014. The participants came from the Ministry of Land and Environment and the Institute of Road Design, DPRK. Speaking at the concluding function of the four-week training program at AIT Extension on 6 March 2014, Mr. Kim Tae Gill, Deputy Director-General, Road Construction and Management Department, Ministry of Land and Environment Protection, DPR Korea, stated that their team is committed to the “sustainable development of road construction and management in Asia.” UNESCAP and AIT can play an important role in enhancing cooperation between countries in Asia, he added.

‘Inclusive financing’ can bring stability and prosperity: Bangladesh Bank Governor Dr. Atiur Rahman Bangladesh Bank Governor Dr. Atiur Rahman says inclusive financing and environmentally friendly ‘green’ Dr. Atiur Rahman banking is the answer to bringing financial stability to turbulent global markets. The governor addressed an audience on 28 March 2014 at AIT on “Socially Responsible Financing for Enhancing Economic and Financial StabilityGlimpses from South Asia.” The lecture, held at the AIT School of Management, was organized by AIT Extension. Citing the success story of his native Bangladesh – which has maintained GDP growth rates of 6% per annum since the global financial meltdown of 20072009 that crippled many world economies – the mercurial central banker said inclusive financing must be a new global priority to ward off the next round of potential financial crises.

Open House 2014 attracts close to 100 prospective students AIT welcomed ninety-six prospective graduate students to its Pathumthani campus on 25 March 2014 for its annual Open House. The visitors, who were mostly Thai nationals, filled the floor of the campus auditorium at a morning information session as they learned about AIT and the postgraduate study options available for the coming August 2014 Semester.

Open House participants quickly learned that there are “no Thais” or “foreign students” at the institute, which operates as a completely neutral, independent and international institution mandated to provide world-class higher education with an Asian perspective. The visitors also toured AIT’s three schools, meeting with the deans, faculty and current students.

Mr. Kewin Morya, an alumnus from Energy Technology (1998), who is currently working in

Brunei, made a second financial donation to his Alma Mater on 21 March 2014. The AIT alum pledged THB 50,000 at a handover ceremony at AIT where he was accompanied by his parents Mr. Kriengsak Morya and Mrs. Chomchai Morya. Mr. Kewin made his first donation to AIT on 18 July 2012 gifting THB 100,000, for post-flood recovery. Mr. Sanjeev Jayasinghe, Director Fundraising and Interim Head, Alumni Affairs, thanked Mr. Morya.

‘Team AIT’ – Champs at FAO ‘International Day of Forests’ Debate Competition A three-member team of students representing AIT recently took top prize at an inter-varsity policy debate competition organized by the Food and Agriculture Organization (FAO) in Bangkok. Marking “International Day of Forests” on 21 March 2014 at the FAO Regional Office for Asia and the Pacific, the competition was held under the theme “Forestry in a Changing World.” AIT’s international graduate students won top honors against the team from King Mongkut’s University of Technology by debating the proposition: “The best way to conserve forests is to keep people out of the forests.” The team included Cambodian doctoral student Sam Chanthy, fellow doctoral student Rehan Ul Haq of Pakistan, and Master’s student Aung Kyaw Naing from Myanmar. All three are students in the Natural Resources Management field of

student at the AIT School of Environment, Resources and Development. Sam Chanthy was also awarded “Best Speaker” at the debate. The winners credited their AIT faculty mentors Dr. Rajendra Shreshta and Prof. Ganesh P Shivakoti for their success.

We Cannot Afford to Waste a Brain The Atlantic carried an interview of Finland’s Minister of Education, Krista Kiuru. Talking about Finland’s phenomenal success in school education, the Minister remarked that Finland has created a school system based on equality. “Equal means that we support everyone and we’re not going to waste anyone’s skills. We don’t know what our kids will turn out like—we can’t know if one first-grader will become a famous composer, or another a famous scientist.”

April 2014 edition of the monthly newsletter of the Asian Institute of Technology (AIT).

April 2014 edition of the monthly newsletter of the Asian Institute of Technology (AIT).