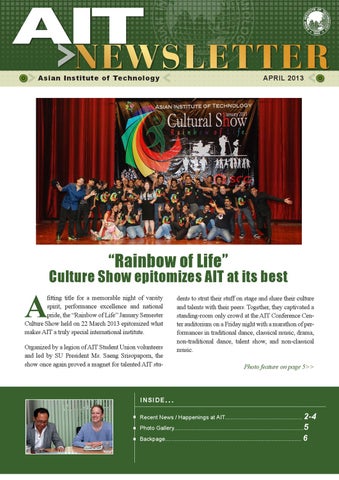 dents to strut their stuff on stage and share their culture and talents with their peers. Together, they captivated a standing-room only crowd at the AIT Conference Center auditorium on a Friday night with a marathon of performances in traditional dance, classical music, drama, non-traditional dance, talent show, and non-classical music. Photo feature on page 5>>

The Bill and Melinda Gates Foundation (BMGF) have indicated interest in AIT becoming a creative platform for research on sanitation and the development of evidence-based policy to impact developing countries in the region.

Visiting AIT on 21-22 March 2013 for exploratory discussions with officials of Environmental Engineering and Management field of study led by AIT’s Dr. Thammarat Koottatep, Dr. Alix Zwane, Senior Program Officer, Global Development, BMGF, said the Seattle-based foundation would like to partner with AIT in a way that matches each other’s strategic visions. She also delivered a special lecture at AIT titled “Strategy and efforts to develop markets and policies for new sanitation products.”

His appointment follows the resignation of Prof. I M Pandey, Vice President for Academic Affairs, who served as Acting President since 4 March 2013.

Details of the appointment are available at this link: http://www.ait.ac.th/news-and-events/2013/news/prof-worsak-kanoknukulchai-is-ait-acting-president/

Mr. Madhav P. Ghimire, an alumnus of AIT, has been appointed as Minister of Home Affairs and Minister of Foreign Affairs in Nepal’s interim government. He assumed office on 14 March 2013 as Minister, in the interim government, which is headed by the Nepal Supreme Court Chief Justice Khilraj Regmi. The Minister enjoys a very strong association with AIT, having graduated with a Master’s in Human Settlements and Development from the School of Environment, Resources and Development (SERD) in 1992. Along with Prof. Max E. Weber, he is the co-editor of a book titled “Bibliography on Environmental Studies” published by AIT in 1993. He was awarded the best alumni award in 2005 by the AIT Alumni Association at its annual meting held in Indonesia.

AIT is one of the best: Mysore Commissioner AIT is one of the best-known institutes globally and we are happy to participate in a specialized training program. This was the remark of Dr. C. G. Bettsurmatt, Commissioner, Mysore Urban Development Authority (MUDA), India at the launch of a one-week long training course on 18 March 2013. Accompanying him, Mr. Akram Pasha, Joint Director, Directorate of Municipal Administration, Bangalore, also from the Indian province of Karnataka, remarked that capacity building has been incorporated at all levels of civil service in their province. He added that more officials would be deputed by the provincial government to receive specialized training at AIT.

AIT’s Professor Emeritus co-authors ADB report Greenhouse Gas (GHG) emissions in five South Asian countries – Bangladesh, Bhutan, the Maldives, Nepal and Sri Lanka – could be reduced by onefifth by 2020 at a reasonably low cost in case they adopt clean technologies. This is a finding of a study co-authored by AIT’s Professor Emeritus Ram Manohar Shrestha titled “The Economics of Reducing Greenhouse Gas Emissions

in South Asia,” which has been recently published by the Asian Development Bank (ADB). Prof Shrestha was the lead consultant to ADB in conducting the study under the first part of the Bank’s regional technical assistance project titled “Regional Economics of Climate Change in South Asia (RECCSA)”.

pation in joint projects. Bhutan is trying to capitalize on the concept of Gross National Happiness, while at the same time focusing on capacity development. The delegation informed AIT that the King of Bhutan established REC in 2007, but since then it has been transferred to the office of the Prime Minister. The mandate of REC is a focus on innovation, and introduction of reforms in the education sector.

Dr. Vu The Dung (second from left) and Dr. Hoang Nam (center) at the inauguration ceremony.

Women’s Day honor: AIT’s Veronique Morin is Canadian Woman of Innovation Ms. Veronique Morin, a doctoral student at AIT has been recognized among “Canadian Women of Innovation” – an initiative of Canada Science and Technology Museums Corporation (CSTMC) and Engineers Canada. “Canadian Women of Innovation” is a virtual exhibition whose opening coincided with International Women’s Day. Ms. Veronique is among the six Canadian women who were highlighted as those who changed the face of science. She finds herself in the company of five other women whose achievements are listed in the timeline zone beginning 1981 onwards.

Finland has an education system the US should envy – and learn from The Guardian states that “Finland’s test scores top global charts, but the country doesn’t obsess about tests like the US, and it pays teachers adequately.” It adds, “A book has attracted much interest in the Washington DC, especially on Capitol Hill, Finnish Lessons: What Can the World Learn From Educational Change in Finland?. The book arrives after Finland scored first in science and second in reading and math on the standardized test administered by the Program for International Student Assessment (PISA).” Read more at this link: http://www.guardian.co.uk/commentisfree/2013/feb/15/us-education-reformlessons-from-finland

April 2013 edition of the montly newsletter of the Asian Institute of Technology (AIT).

April 2013 edition of the montly newsletter of the Asian Institute of Technology (AIT).