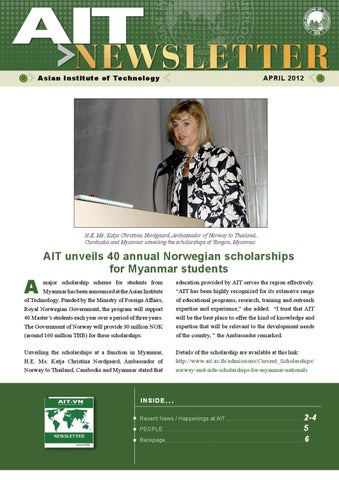 major scholarship scheme for students from Myanmar has been announced at the Asian Institute of Technology. Funded by the Ministry of Foreign Affairs, Royal Norwegian Government, the program will support 40 Master’s students each year over a period of three years. The Government of Norway will provide 30 million NOK (around 160 million THB) for these scholarships.

education provided by AIT serves the region effectively. “AIT has been highly recognized for its extensive range of educational programs, research, training and outreach expertise and experience,” she added. “I trust that AIT will be the best place to offer the kind of knowledge and expertise that will be relevant to the development needs of the country, ” the Ambassador remarked.

Unveiling the scholarships at a function in Myanmar, H.E. Ms. Katja Christina Nordgaard, Ambassador of Norway to Thailand, Cambodia and Myanmar stated that

Details of the scholarship are available at this link: http://www.ait.ac.th/admissions/Current_Scholarships/ norway-and-sida-scholarships-for-myanmar-nationals

AIT is a Center of Excellence: Indonesian Ambassador Ambassador of the Republic of Indonesia to Thailand, H. E. Mr. Lutfi Rauf has complimented AIT, describing it as a “center of excellence” in many fields, particularly in science and technology. H.E. Mr. Rauf made these remarks during his maiden visit to AIT on 22 March 2012. “Through your programs, Indonesian students have spread all over the world, and are carrying out the task of facing global challenges,” the ambassador said. “It is my endeavor to establish close cooperation with leading institutions and universities,” he said, adding that AIT helps preparing people in responding to global issues, particularly on the issue of sustainable development.

Ambassador of Bangladesh to Thailand, H.E. Mr. Kazi Imtiaz Hossian, complimented all the successful candidates and thanked AIT for contributing towards capacity building in Bangladesh. All 21 participants in the first batch of the PMBF program are officers of the Bangladesh Bank. Mr. Ahsah Ullah and Mr. M. Mahfuzur Rahman, Executive Directors of Bangladesh Bank also participated in the completion ceremony held at Plaza Athenee Hotel in Bangkok.

Open forum for AIT students At an open information forum conducted by President Prof. Said Irandoust on 21 March 2012 at the Milton E. Bender Jr. Auditorium, AIT students got firsthand information about all ongoing efforts to rebuild and upgrade the campus. The president, who chairs the AIT Rebuilding and Upgrade Committee, disclosed full details of AIT’s ongoing efforts to secure flood-aid from the Royal Thai Government (RTG), as well as AIT’s flood damage compensation claims with its insurance company.

Hold-ups on both fronts are the primary reason for the delays in refurbishing damaged facilities on campus, President Irandoust explained. Students voiced their concerns about communication of the overall plan, engagement by their student representative with the Rebuilding and Upgrade Committee; and explained the critical day-to-day problems they face while living on campus.

Task Force set up to protect AIT campus from future floods Responding to the risk of flood reoccurring in Thailand this year, AIT has instituted a specialized Task Force to devise a flood protection plan for its Pathumthani province campus. Announcing the formation of the Task Force on 2 March 2012, AIT President Prof. Said Irandoust said it brings together the considerable technical expertise of AIT’s

own faculty members, including academics from structural, geotechnical, hydraulic, and water management engineering fields, as well as experts from the fields of natural resource management, remote sensing, disaster risk analysis, and structural and project management. The Task Force will be chaired by

Prof.Worsak Kanok-Nukulchai, AIT Vice President, Resource Development. A high priority will be to determine the probability a major flood occurring this year. The AIT experts will study flood prevention options for the campus, including a dyke / retaining wall system and a flood passage way to be constructed by August this year.

AIT-Vietnam launches a New Public Information push AIT-Vietnam launched a new public information push this month, unveiling its new website and the inaugural issue of its bimonthly Newsletter to the public. Dr. Amrit Bart, AIT-VN Director, explains: “We are growing and we hope the new website and newsletter will help to inform the public of the great opportunities existing at AITVN.” The first issue (http://aitvn.asia/upload/iblock/9aa/January%20d%20Feb2012. pdf) provides the latest news about major events at AIT Vietnam in January and February 2012. Visit the new website (http://www.aitvn.asia/). Dr. Amrit Bart

search work. They will be based at UBC for four months starting 1 March 2012. This gesture comes from UBC, after AIT approached its partners and associates to help its students find adequate research facilities so that they could continue with their research and thesis work. When the floodwaters hit the AIT campus, Ms. Pattira Pattarasopachai, a Master’s student at PPT, was at UBC’s Pulp and Paper Centre working under the supervision of its director, Prof. James Olson. Learning about the conditions at AIT, UBC offered to host the students. UBC has also provided a grant of $(CAN) 5,500 per student to cover travel and other living expenses. The students will not be required to pay tuition fee at UBC, since they are working on their research and thesis.

Agreenium to host nine AIT students at labs in France

Responding to a request from President Prof. Said Irandoust for post-flood assistance, Agreenium has agreed to host nine AIT students at research laboratories of their affiliated partners, which are all top research and higher education institutes in France.

The offer was communicated in a letter delivered by Dr. Jean-Charles Maillard, CIRAD Regional Director for Continental South East Asia on behalf of Dr. Marion Guillou, President of Agreenium. Dr. Maillard visited AIT at its Bangkok Office on 16 March 2012. He was joined by Dr. Philippe Girard, the new CIRAD Representative for Thailand.

Book Release A book titled “Kathmandu Valley Groundwater Outlook” edited by Dr. Sangam Shrestha, a faculty member of the Asian Institute of Technology (AIT), was launched during the ‘Nepal National Water Week 2012’ celebrations. Dr. Sangam Shrestha The book release ceremony took place on 22 March 2012, to coincide with the water week celebrations. Dr. Shrestha is an Assistant Professor in Water Engineering and Management (WEM) field of study, at AIT’s School of Engineering and Technology. The book is jointly published by AIT, The Small Earth Nepal (SEN), Center of Research for Environment Energy and Water (CREEW) and University of Yamanashi, Japan.

Appointed Curtis S. Chin, a former Ambassador of the United States of America to the Asian Development Bank (ADB), has joined AIT as a Senior Fellow and inaugural Executive-in-Residence. Mr. Curtis S. Chin

He will be at AIT for an initial three-month period beginning March 2012. From May 2007 to October 2010, Ambassador Chin served as the 15th U.S. Executive Director at ADB.

AIT alumnus Dr. Qwanruedee Chotichanathawewong, who is a graduate of the Energy field of study, has been appointed President of Thailand Environment Institute (TEI), starting in January 2012.

Dr. Qwanruedee studied at AIT from 1988-1991, earning a Doctor of Engineering (DEng) degree.

Dr. Kunnawee Kanitpong has been promoted as Associate Professor. A faculty member in the Transportation Engineering field of study at AIT’s School of Engineering and Technology, Dr. Kunnawee joined AIT in July 2005.

Dr. Matthew Dailey has been promoted to the position of Associate Professor. Dr. Dailey is a faculty member in the Computer Science and Information Management (CSIM) field of study at AIT’s School of Engineering and Technology.

Dr. Pisut Koomsap, a faculty member in the Design and Manufacturing Engineering (DME) field of study at AIT’s School of Engineering and Technology has been promoted as Associate Professor.

Dr. Vilas Nitivattananon, a faculty member in the Urban Environmental Management (UEM) field of study at AIT’s School of Environment, Research and Development, has been promoted to the position of Associate Professor.

Dr. Pisut, joined AIT in 2003. His areas of specialization and research interests are rapid prototyping, collision avoidance system and abrasive waterjet machining, and sensing and control for manufacturing processes and systems.

No print editions of Encyclopedia Britannica It finally yielded to the digital age. A Reuters news report on 14 March 2012 states, “The Encyclopaedia Britannica, which has been in continuous print since it was first published in Edinburgh, Scotland in 1768, said on Wednesday it will end publication of its printed editions and continue with digital versions available online.The flagship, 32-volume printed edition, available every two years, was sold for $1400. An online subscription costs around $70 per year and the company recently launched a set of apps ranging between $1.99 and $4.99 per month.The company said it will keep selling print editions until the current stock of around 4000 sets ran out.” Read more at this link:

http://www.reuters.com/article/2012/03/14/net-us-encyclopediabritannica-idUSBRE82C1FS20120314 While there were many requiems, the issue of digital versus print was debated widely in the media. Financial Times wrote: “I’ll Google it” has replaced “I’ll look it up in the Encyclopedia Britannica”is one reason why it will now only be published online. http://www.ft.com/intl/cms/s/0/7052641a-6f3a-11e1-b368-00144feab49a.html While CNN lamented the loss of the print icon: http://articles.cnn.com/2012-03-15/us/us_encyclopedia-britannica-icon-nostalgia_1_encyclopaedia-britannica-encyclopaedia-britannica-encyclopedia-britannica?_ s=PM:US Follow AIT at • Facebook www.facebook.com/aitasia • Youtube www.youtube.com/aitasia