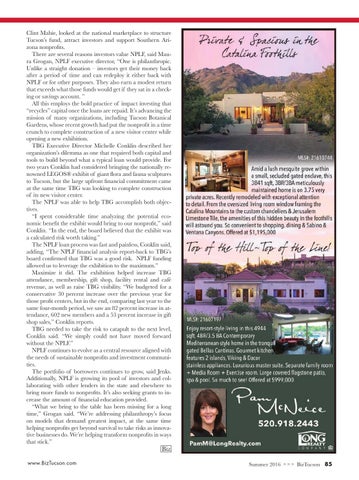 Clint Mabie, looked at the national marketplace to structure Tucson’s fund, attract investors and support Southern Arizona nonprofits. There are several reasons investors value NPLF, said Maura Grogan, NPLF executive director, “One is philanthropic. Unlike a straight donation – investors get their money back after a period of time and can redeploy it either back with NPLF or for other purposes. They also earn a modest return that exceeds what those funds would get if they sat in a checking or savings account. ” All this employs the bold practice of impact investing that “recycles” capital once the loans are repaid. It’s advancing the mission of many organizations, including Tucson Botanical Gardens, whose recent growth had put the nonprofit in a time crunch to complete construction of a new visitor center while opening a new exhibition. TBG Executive Director Michelle Conklin described her organization’s dilemma as one that required both capital and tools to build beyond what a typical loan would provide. For two years Conklin had considered bringing the nationally renowned LEGOS® exhibit of giant flora and fauna sculptures to Tucson, but the large upfront financial commitment came at the same time TBG was looking to complete construction of its new visitor center. The NPLF was able to help TBG accomplish both objectives. “I spent considerable time analyzing the potential economic benefit the exhibit would bring to our nonprofit,” said Conklin. “In the end, the board believed that the exhibit was a calculated risk worth taking.” The NPLF loan process was fast and painless, Conklin said, adding, “The NPLF financial analysis report-back to TBG’s board confirmed that TBG was a good risk. NPLF funding allowed us to leverage the exhibition to the maximum.” Maximize it did. The exhibition helped increase TBG attendance, membership, gift shop, facility rental and café revenue, as well as raise TBG visibility. “We budgeted for a conservative 30 percent increase over the previous year for those profit centers, but in the end, comparing last year to the same four-month period, we saw an 82 percent increase in attendance, 602 new members and a 53 percent increase in gift shop sales,” Conklin reports. TBG needed to take the risk to catapult to the next level, Conklin said. “We simply could not have moved forward without the NPLF.” NPLF continues to evolve as a central resource aligned with the needs of sustainable nonprofits and investment communities. The portfolio of borrowers continues to grow, said Jenks. Additionally, NPLF is growing its pool of investors and collaborating with other lenders in the state and elsewhere to bring more funds to nonprofits. It’s also seeking grants to increase the amount of financial education provided. “What we bring to the table has been missing for a long time,” Grogan said. “We’re addressing philanthropy’s focus on models that demand greatest impact, at the same time helping nonprofits get beyond survival to take risks as innovative businesses do. We’re helping transform nonprofits in ways that stick.”