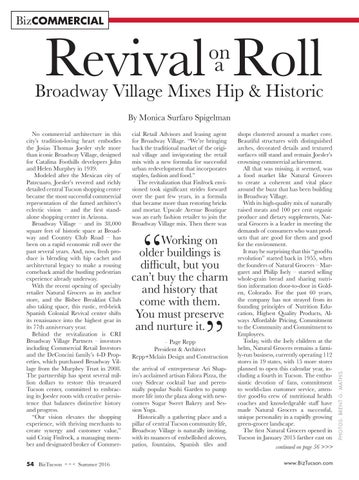 Revival Roll on a

Broadway Village Mixes Hip & Historic No commercial architecture in this city’s tradition-loving heart embodies the Josias Thomas Joesler style more than iconic Broadway Village, designed for Catalina Foothills developers John and Helen Murphey in 1939. Modeled after the Mexican city of Patzcuaro, Joesler’s revered and richly detailed central Tucson shopping center became the most successful commercial representation of the famed architect’s eclectic vision – and the first standalone shopping center in Arizona. Broadway Village – and its 38,000 square feet of historic space at Broadway and Country Club Road – has been on a rapid economic roll over the past several years. And, now, fresh produce is blending with hip cachet and architectural legacy to make a rousing comeback amid the bustling pedestrian experience already underway. With the recent opening of specialty retailer Natural Grocers as its anchor store, and the Bisbee Breakfast Club also taking space, this rustic, red-brick Spanish Colonial Revival center shifts its renaissance into the highest gear in its 77th anniversary year. Behind the revitalization is CRI Broadway Village Partners – investors including Commercial Retail Investors and the DeConcini family’s 4-D Properties, which purchased Broadway Village from the Murphey Trust in 2008. The partnership has spent several million dollars to restore this treasured Tucson center, committed to embracing its Joesler roots with creative persistence that balances distinctive history and progress. “Our vision elevates the shopping experience, with thriving merchants to create synergy and customer value,” said Craig Finfrock, a managing member and designated broker of Commer54 BizTucson

cial Retail Advisors and leasing agent for Broadway Village. “We’re bringing back the traditional market of the original village and invigorating the retail mix with a new formula for successful urban redevelopment that incorporates staples, fashion and food.” The revitalization that Finfrock envisioned took significant strides forward over the past few years, in a formula that became more than restoring bricks and mortar. Upscale Avenue Boutique was an early fashion retailer to join the Broadway Village mix. Then there was

Working on older buildings is difficult, but you can’t buy the charm and history that come with them. You must preserve and nurture it.

shops clustered around a market core. Beautiful structures with distinguished arches, decorated details and textured surfaces still stand and remain Joesler’s crowning commercial achievement. All that was missing, it seemed, was a food market like Natural Grocers to create a coherent and vital place around the buzz that has been building in Broadway Village. With its high-quality mix of naturally raised meats and 100 per cent organic produce and dietary supplements, Natural Grocers is a leader in meeting the demands of consumers who want products that are good for them and good for the environment. It may be surprising that this “good4u revolution” started back in 1955, when the founders of Natural Grocers – Margaret and Philip Isely – started selling whole-grain bread and sharing nutrition information door-to-door in Golden, Colorado. For the past 60 years, the company has not strayed from its founding principles of Nutrition Education, Highest Quality Products, Always Affordable Pricing, Commitment to the Community and Commitment to Employees. Today, with the Isely children at the helm, Natural Grocers remains a family-run business, currently operating 112 stores in 19 states, with 15 more stores planned to open this calendar year, including a fourth in Tucson. The enthusiastic devotion of fans, commitment to world-class customer service, attentive good4u crew of nutritional health coaches and knowledgeable staff have made Natural Grocers a successful, unique personality in a rapidly growing green-grocer landscape. The first Natural Grocers opened in Tucson in January 2015 farther east on continued on page 56 >>> www.BizTucson.com