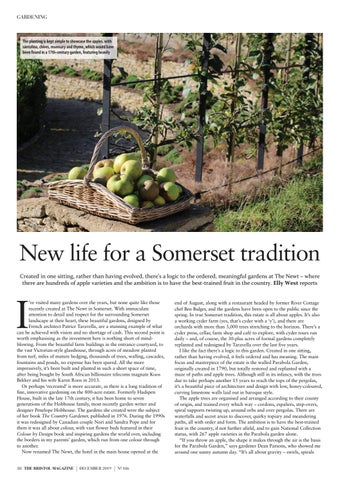 The planting is kept simple to showcase the apples, with santolina, chives, rosemary and thyme, which would have been found in a 17th-century garden, featuring heavily

New life for a Somerset tradition Created in one sitting, rather than having evolved, there’s a logic to the ordered, meaningful gardens at The Newt – where there are hundreds of apple varieties and the ambition is to have the best-trained fruit in the country. Elly West reports

’ve visited many gardens over the years, but none quite like those recently created at The Newt in Somerset. With immaculate attention to detail and respect for the surrounding Somerset landscape at their heart, these beautiful gardens, designed by French architect Patrice Taravella, are a stunning example of what can be achieved with vision and no shortage of cash. This second point is worth emphasising as the investment here is nothing short of mindblowing. From the beautiful farm buildings in the entrance courtyard, to the vast Victorian-style glasshouse, through acres of meadow planted from turf, miles of mature hedging, thousands of trees, walling, cascades, fountains and ponds, no expense has been spared. All the more impressively, it’s been built and planted in such a short space of time, after being bought by South African billionaire telecoms magnate Koos Bekker and his wife Karen Roos in 2013. Or perhaps ‘recreated’ is more accurate, as there is a long tradition of fine, innovative gardening on the 800-acre estate. Formerly Hadspen House, built in the late 17th century, it has been home to seven generations of the Hobhouse family, most recently garden writer and designer Penelope Hobhouse. The gardens she created were the subject of her book The Country Gardener, published in 1976. During the 1990s it was redesigned by Canadian couple Nori and Sandra Pope and for them it was all about colour, with vast flower beds featured in their Colour by Design book and inspiring gardens the world over, including the borders in my parents’ garden, which run from one colour through to another. Now renamed The Newt, the hotel in the main house opened at the

end of August, along with a restaurant headed by former River Cottage chef Ben Bulger, and the gardens have been open to the public since the spring. In true Somerset tradition, this estate is all about apples. It’s also a working cyder farm (yes, that’s cyder with a ‘y’), and there are orchards with more than 3,000 trees stretching to the horizon. There’s a cyder press, cellar, farm shop and café to explore, with cyder tours run daily – and, of course, the 30-plus acres of formal gardens completely replanted and redesigned by Taravella over the last five years. I like the fact there’s a logic to this garden. Created in one sitting, rather than having evolved, it feels ordered and has meaning. The main focus and masterpiece of the estate is the walled Parabola Garden, originally created in 1790, but totally restored and replanted with a maze of paths and apple trees. Although still in its infancy, with the trees due to take perhaps another 15 years to reach the tops of the pergolas, it’s a beautiful piece of architecture and design with low, honey-coloured, curving limestone walls laid out in baroque style. The apple trees are organised and arranged according to their county of origin, and trained every which way – cordons, espaliers, step-overs, spiral supports twisting up, around orbs and over pergolas. There are waterfalls and secret areas to discover, quirky topiary and meandering paths, all with order and form. The ambition is to have the best-trained fruit in the country, if not further afield, and to gain National Collection status, with 267 apple varieties in the Parabola garden alone. “If you throw an apple, the shape it makes through the air is the basis for the Parabola Garden,” says gardener Dean Parsons, who showed me around one sunny autumn day. “It’s all about gravity – swirls, spirals