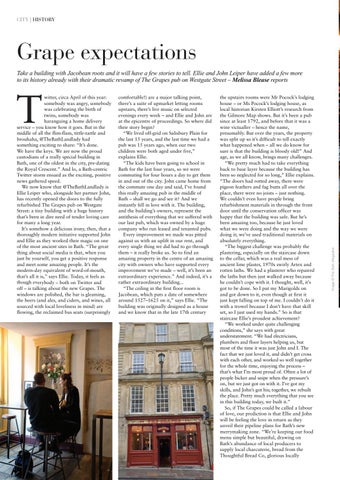 witter, circa April of this year: somebody was angry, somebody was celebrating the birth of twins, somebody was haranguing a home delivery service – you know how it goes. But in the middle of all the flim-flam, tittle-tattle and brouhaha, @TheBathLandlady had something exciting to share: “It’s done. We have the keys. We are now the proud custodians of a really special building in Bath, one of the oldest in the city, pre-dating the Royal Crescent.” And lo, a Bath-centric Twitter storm ensued as the exciting, positive news gathered speed. We now know that @TheBathLandlady is Ellie Leiper who, alongside her partner John, has recently opened the doors to the fully refurbished The Grapes pub on Westgate Street: a tiny building with a huge history that’s been in dire need of tender loving care for many a long year. It’s somehow a delicious irony, then, that a thoroughly modern initiative supported John and Ellie as they worked their magic on one of the most ancient sites in Bath. “The great thing about social media is that, when you just be yourself, you get a positive response and meet some amazing people. It’s the modern-day equivalent of word-of-mouth, that’s all it is,” says Ellie. Today, it feels as though everybody – both on Twitter and off – is talking about the new Grapes. The windows are polished, the bar is gleaming, the beers (and ales, and ciders, and wines, all sourced with local loveliness in mind) are flowing, the reclaimed bus seats (surprisingly

comfortable!) are a major talking point, there’s a suite of upmarket letting rooms upstairs, there’s live music on selected evenings every week – and Ellie and John are at the epicentre of proceedings. So where did their story begin? “We lived off-grid on Salisbury Plain for the last 15 years, and the last time we had a pub was 15 years ago, when our two children were both aged under five,” explains Ellie. “The kids have been going to school in Bath for the last four years, so we were commuting for four hours a day to get them in and out of the city. John came home from the commute one day and said, I’ve found this really amazing pub in the middle of Bath – shall we go and see it? And we instantly fell in love with it. The building, and the building’s owners, represent the antithesis of everything that we suffered with our last pub, which was owned by a huge company who run leased and tenanted pubs. Every improvement we made was pitted against us with an uplift in our rent, and every single thing we did had to go through them – it really broke us. So to find an amazing property in the centre of an amazing city with owners who have supported every improvement we’ve made – well, it’s been an extraordinary experience.” And indeed, it’s a rather extraordinary building... “The ceiling in the first floor room is Jacobean, which puts a date of somewhere around 1527–1625 on it,” says Ellie. “The building was originally designed as a house and we know that in the late 17th century

the upstairs rooms were Mr Pocock’s lodging house – or Ms Pocock’s lodging house, as local historian Kirsten Elliott’s research from the Gilmore Map shows. But it’s been a pub since at least 1792, and before that it was a wine victualler – hence the name, presumably. But over the years, the property was split up so it’s difficult to tell exactly what happened when – all we do know for sure is that the building is bloody old!” And age, as we all know, brings many challenges. “We pretty much had to take everything back to base layer because the building has been so neglected for so long,” Ellie explains. “The doors had rotted away, there were pigeon feathers and fag butts all over the place, there were no joists – just nothing. We couldn’t even have people bring refurbishment materials in through the front door until the conservation officer was happy that the building was safe. But he’s been amazing too, because he just loved what we were doing and the way we were doing it; we’ve used traditional materials on absolutely everything. “The biggest challenge was probably the plastering, especially on the staircase down to the cellar, which was a real mess of ancient lime plaster, 1970s swirly Artex and rotten laths. We had a plasterer who repaired the laths but then just walked away because he couldn’t cope with it. I thought, well, it’s got to be done. So I put my Marigolds on and got down to it, even though at first it just kept falling on top of me. I couldn’t do it with a trowel because I don’t have that skill set, so I just used my hands.” So is that staircase Ellie’s proudest achievement? “We worked under quite challenging conditions,” she says with great understatement. “We had electricians, plumbers and floor layers helping us, but most of the time it was just John and I. The fact that we just loved it, and didn’t get cross with each other, and worked so well together for the whole time, enjoying the process – that’s what I’m most proud of. Often a lot of people bicker and snipe when the pressure’s on, but we just got on with it. I’ve got my skills, and John’s got his; together, we rebuilt the place. Pretty much everything that you see in this building today, we built it.” So, if The Grapes could be called a labour of love, our prediction is that Ellie and John will be feeling the love in return as they unveil their pipeline plans for Bath’s new merrymaking zone. “We’re keeping our food menu simple but beautiful, drawing on Bath’s abundance of local producers to supply local charcuterie, bread from the Thoughtful Bread Co, glorious locally

Take a building with Jacobean roots and it will have a few stories to tell. Ellie and John Leiper have added a few more to its history already with their dramatic revamp of The Grapes pub on Westgate Street – Melissa Blease reports