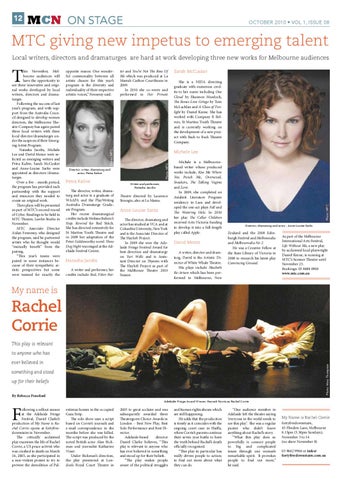 MTC giving new impetus to emerging talent Local writers, directors and dramaturges are hard at work developing three new works for Melbourne audiences ter and You’re Not The Boss Of Me which was produced at La Mama’s Carlton Courthouse in 2009. In 2010 she co-wrote and performed in Her Private

The director, writer, dramaturg and actor is a graduate of WAAPA and the PlayWriting Australia Dramaturge Graduate Program. Her recent dramaturgical credits include Melissa Bubnic’s Stop. Rewind for Red Stitch. She has directed extensively for St Martins Youth Theatre and in 2009 her adaptation of the Peter Goldsworthy novel Three Dog Night was staged at the Adelaide Festival Centre.

Natasha Jacobs A writer and performer, her credits include Red, Fitter Pat-

She is a NIDA directing graduate with numerous credits to her name including One Cloud by Shannon Murdoch, The Bones Love Gringo by Tom McLachlan and A Glass of Twilight by Daniel Keene. She has worked with Company B Belvoir, St Martins Youth Theatre and is currently working on the development of a new project with Back to Back Theatre Company.

Anne-Louise Sarks The director, dramaturg and actor has studied at VCA and at Columbia University, New York and is the Associate Director of The Hayloft Project. In 2009 she won the Adelaide Fringe Festival Award for best direction and dramaturgy on Yuri Wells and is Assistant Director on Thyestes with The Hayloft Project as part of the Malthouse Theatre 2010 Season.

Michele is a Melbournebased writer whose produced works include, Kiss Me Where You Punch Me, Oversexed, Sneakers, The Talking Vagina and Love. In 2009, she completed an Asialink Literature Program residency in Laos and developed the one-act plays Fall and The Watering Hole. In 2010 her play The Cellar Children received Arts Victoria funding to develop it into a full-length play called Apple.

David Mence A writer, director and dramturg, David is the Artistic Director of White Whale Theatre. His plays include Macbeth Re-Arisen which has been performed in Melbourne, New

opposite reason. One wonderful commonality between all artists chosen for this year’s program is the diversity and individuality of their respective artistic voices,” Fennessy said.

his November, Melbourne audiences will have the opportunity to see three innovative and original works developed by local writers, directors and dramaturges. Following the success of last year’s program, and with support from the Australia Council designed to develop women directors, the Melbourne Theatre Company has again paired three local writers with three local director/dramaturges under the auspices of their Emerging Artist Program. Natasha Jacobs, Michele Lee and David Mence were selected as emerging writers and Petra Kalive, Sarah McCusker and Anne-Louise Sarks were appointed as directors /dramaturges. Over a five - month period, the program has provided each partnership with the support and resources they needed to create an original work. Their plays will be presented as part of MTC’s second round of Cybec Readings to be held in MTC Theatre, Lawler Studio in November. MTC Associate Director Aidan Fennessy, who designed the program, said he partnered artists who he thought would “mutually benefit” from the pairing. “This year’s teams were paired in some instances because of their sympathetic artistic perspectives but some were teamed for exactly the

Zealand and the 2008 Edinburgh Festival and Melbounalia and Melbournalia No 2. He was a Creative Fellow at the State Library of Victoria in 2008 to research his latest play Convincing Ground.

As part of the Melbourne International Arts Festival, Life Without Me, a new play by acclaimed local playwright Daniel Keene, is running at MTC’s Sumner Theatre until November 23. Bookings: 03 8688 0900 www.mtc.com.au

Rachel Corrie This play is relevant to anyone who has Photo: Mary Thompson

ollowing a sellout season at the Adelaide Fringe Festival, Daniel Clarke’s production of My Name is Rachel Corrie opens at fortyfivedownstairs in November. The critically acclaimed play examines the life of Rachel Corrie, a US peace activist who was crushed to death on March 16, 2003, as she participated in a non-violent protest to try to prevent the demolition of Pal-

estinian homes in the occupied Gaza Strip. The solo show uses a script based on Corrie’s journals and e-mail correspondence in the months before she was killed. The script was produced by the noted British actor Alan Rickman and journalist Katharine Viner. Under Rickman’s direction, the play premiered at London’s Royal Court Theater in

2005 to great acclaim and was subsequently awarded three Theatregoers Choice Awards in London – Best New Play, Best Solo Performance and Best Director. Adelaide-based director Daniel Clarke believes, “This play is relevant to anyone who has ever believed in something and stood up for their beliefs. “The play makes people aware of the political struggles

and human rights abuses which are still happening. He adds that the production is timely as it coincides with the ongoing court case in Haiffa, where Corrie’s parents continue their seven year battle to have the truth behind Rachel’s death officially recognised. “This play in particular has really driven people to action; to find out more about what they can do.

“One audience member in Adelaide left the theatre saying ‘everyone in the world needs to see this play’. She was a regular punter who didn’t know anything about Rachel’s story. “What this play does so powerfully is connect people to big and complicated issues through one woman’s remarkable spirit. It provokes people to find out more,” he said.