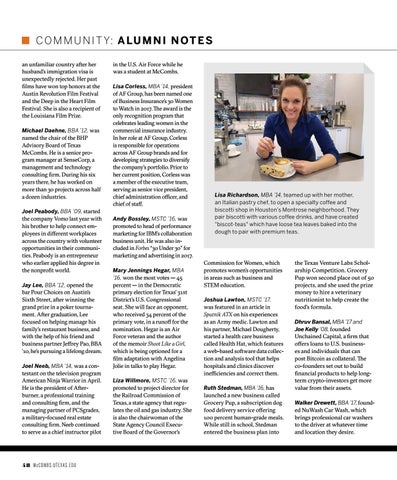 C O M M U N I T Y: A LU M N I N O T E S an unfamiliar country after her husband’s immigration visa is unexpectedly rejected. Her past films have won top honors at the Austin Revolution Film Festival and the Deep in the Heart Film Festival. She is also a recipient of the Louisiana Film Prize. Michael Daehne, BBA ’12, was

named the chair of the BHP Advisory Board of Texas McCombs. He is a senior program manager at SenseCorp, a management and technology consulting firm. During his six years there, he has worked on more than 30 projects across half a dozen industries.

in the U.S. Air Force while he was a student at McCombs. Lisa Corless, MBA ’14, president

of AF Group, has been named one of Business Insurance’s 30 Women to Watch in 2017. The award is the only recognition program that celebrates leading women in the commercial insurance industry. In her role at AF Group, Corless is responsible for operations across AF Group brands and for developing strategies to diversify the company's portfolio. Prior to her current position, Corless was a member of the executive team, serving as senior vice president, chief administration officer, and chief of staff.

the company Vomo last year with his brother to help connect employees in different workplaces across the country with volunteer opportunities in their communities. Peabody is an entrepreneur who earlier applied his degree in the nonprofit world.

percent — in the Democratic primary election for Texas’ 31st District’s U.S. Congressional seat. She will face an opponent, who received 34 percent of the primary vote, in a runoff for the nomination. Hegar is an Air Force veteran and the author of the memoir Shoot Like a Girl, which is being optioned for a film adaptation with Angelina Jolie in talks to play Hegar.

bar Pour Choices on Austin’s Sixth Street, after winning the grand prize in a poker tournament. After graduation, Lee focused on helping manage his family’s restaurant business, and with the help of his friend and business partner Jeffrey Pao, BBA ’10, he’s pursuing a lifelong dream. Joel Neeb, MBA ’14, was a con-

testant on the television program American Ninja Warrior in April. He is the president of Afterburner, a professional training and consulting firm, and the managing partner of PCSgrades, a military-focused real estate consulting firm. Neeb continued to serve as a chief instructor pilot

promoted to head of performance marketing for IBM’s collaboration business unit. He was also included in Forbes “30 Under 30” for marketing and advertising in 2017. Mary Jennings Hegar, MBA ’16, won the most votes — 45

Lisa Richardson, MBA ’14, teamed up with her mother, an Italian pastry chef, to open a specialty coffee and biscotti shop in Houston’s Montrose neighborhood. They pair biscotti with various coffee drinks, and have created "biscot-teas" which have loose tea leaves baked into the dough to pair with premium teas.

Commission for Women, which promotes women’s opportunities in areas such as business and STEM education. Joshua Lawton, MSTC ’17,

was featured in an article in Sputnik ATX on his experiences as an Army medic. Lawton and his partner, Michael Dougherty, started a health care business called Health Hat, which features a web-based software data collection and analysis tool that helps hospitals and clinics discover inefficiencies and correct them.

Unchained Capital, a firm that offers loans to U.S. businesses and individuals that can post Bitcoin as collateral. The co-founders set out to build financial products to help longterm crypto-investors get more value from their assets.

Walker Drewett, BBA ’17, founded NuWash Car Wash, which brings professional car washers to the driver at whatever time and location they desire.

promoted to project director for the Railroad Commission of Texas, a state agency that regulates the oil and gas industry. She is also the chairwoman of the State Agency Council Executive Board of the Governor’s

the Texas Venture Labs Scholarship Competition. Grocery Pup won second place out of 50 projects, and she used the prize money to hire a veterinary nutritionist to help create the food's formula. 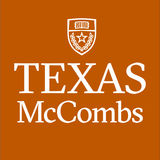