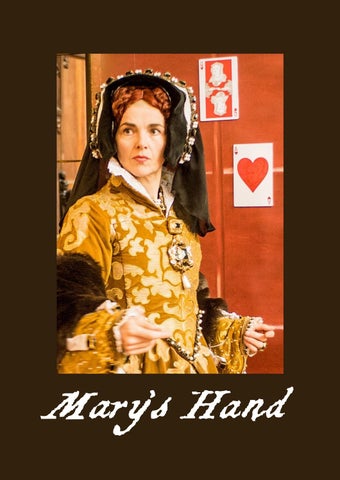 Enter with Imagination if you wish to talk with the Dead Di Sherlock I knew the period from my plays on Elizabeth ( Elizabeth the Virgin Queen, Liz and Di). I did not know Mary - only glimpsed her fragmentarily, a shadow passing. Her story is tortuous, moments of triumph then terrible reversal. That she became Queen at all was against all odds. A linear narrative did not fit. When I stumbled on her passion for cards I was given a way in – she would tell her story through the playing out of the hand dealt by Birth, Fate, History. I did not have Martin&#39;s music to inspire; I had hard historical fact. Mary came from another world, a world whose seasons turned with the liturgical calendar, but also the rhythms of the natural world – flowers, trees, birds. To hear Mary I needed to listen with the imagination, sit in her garden. I had a month to write the libretto. I prayed she would enter the conversation.

The image used on the back of the playing cards in Mary’s Hand is the badge of Catherine of Aragon. The design shows the crown of the royal house of Spain and the armorial symbol of the pomegranate.

‘His loyal Queen is out of the game. The pomegranate wormwood in his mouth’

Catherine of Aragon (1485 - 1536) Mary&#39;s mother, first wife of Henry VIII, daughter of Ferdinand and Isabella, Los Reyes Catolicos. She was first married to Henry&#39;s older brother Arthur, who died after five months. Henry uses this to petition for an annulment of the marriage, setting in motion the English Reformation. Anne Boleyn (1507? - 1536) Mary&#39;s stepmother, Henry&#39;s second wife and the mother of Elizabeth. Accused of serial adultery she is beheaded in the Tower of London.

Thomas Cranmer (1489 - 1556) First Protestant Archbishop of Canterbury. Built the case for the annulment of Henry&#39;s marriage to Catherine. When he witnesses Bishops Latimer and Ridley burn at the stake he recants. However he publicly retracts his recantation when he is burned at the stake himself.

Edward VI (1537 - 1553) Mary&#39;s Protestant half-brother. On Henry&#39;s death he becomes King aged nine and the country is governed by a Regency Council. At fifteen he contracts a fatal illness. To prevent Mary coming to the throne and returning the country to Catholicism, he changes the Line of Succession, naming his Protestant cousin Lady Jane Grey his heir. Mary deposes Jane nine days after she is proclaimed Queen. Jane is later executed.

Thomas Cromwell (1485 - 1540) Henry&#39;s Chief Minister. After engineering the execution of his former ally Anne Boleyn, he compels Mary to take the Oath of Supremacy, acknowledging her father as Head of the Church and her mother&#39;s marriage as unlawful.

Philip II of Spain (1527 - 1598) Mary&#39;s husband, eleven years her junior. Son of Holy Roman Emperor Charles V, Mary&#39;s maternal first cousin. Co-reigns with Mary as King of England. During the war with France they lose The Port of Calais – England&#39;s last remaining possession in France. On Mary&#39;s death Philip loses his rights to the English throne. In all he had four wives. Susan Clarencius (? - ca. 1564) Mary&#39;s longtime friend and Chief of her Ladies.

In Mary’s Hand the Joker represents the capriciousness of the English weather. The image on the Joker card shows Will Sommers, Henry VIII’s favourite court jester. He also served Mary I, alongside Mary’s personal jester Jane Foole.

I am the one you do not like Queen Mary I is perceived as a villain but the reality is more subtle and fascinating. As a child Mary was celebrated, but rejection and banishment marked her adolescence and religion became her chief comfort. Her Catholic zeal and political naivety were tragic factors in her later actions as Queen; her failure to bear a child was an equal and more personal disaster.

‘There is a flower some call Hearts-ease, Mary&#39;s face, Jack-jump-up-and-kiss-me. It&#39;s for thoughts – pensées. You know it in tamer form.’ Photo by Robert Workman

She was also creating a new order. As the first Queen Regnant of England, the constitutional implications of her marriage had to be addressed and the belief overcome that women were simply too weak to rule. We think of Elizabeth I’s speech to her troops at Tilbury, but Mary got there first, rallying her supporters before riding from Suffolk to London to claim the crown from an ill-advised Jane Grey.

Mary’s Hand takes a fresh look at Mary. This is a Queen who loved dice and cards, followed the latest French fashions and whose appearance boasted the most exquisite jewellery every bit as much as half-sister Elizabeth. It is fitting that Mary’s Hand uses the language of cards and an iconic image to tell her story. The dress that Mary wears is copied from the portrait painted shortly after her coronation. The portrait captures Mary at the height of her power, elevated to her rightful position as Queen of England and signalling her intentions for the future of the realm and herself. As our drama unfolds with the turning of the cards we discover how Mary&#39;s hopes and dreams are betrayed by family, enemies, circumstance and ultimately her luckless self.

The Music of Mary The score of Mary’s Hand is almost entirely original but draws on a number of historic sources from Mary’s own time including an example of the dance &#39;La Volta&#39;. The most significant quotation in the piece is a phrase of plainsong chant used in a mass by Thomas Tallis, which is thought to have a special connection to Mary. The mass is based on the Gregorian introit Puer natus est nobis (A boy is born for us) which begins the third mass for Christmas Day in the Catholic liturgy. The upward leap at the start of the introit informs several original musical ideas in Mary&#39;s Hand.

Tallis’s mass is scored for an unusual combination of lower voices, written to suit the singers of Philip II’s Chapel Royal which was resident in England between 1554 and 1555, following the Spanish King’s marriage to Mary in July 1554. The possibility that the mass was first performed at Christmas 1554 also supports the theory that the Puer natus plainsong was chosen to celebrate the fact that Queen Mary was thought to be pregnant at this time. In April 1555 it was falsely reported that Mary had delivered a son. The news quickly spread to the Continent, only to be awkwardly retracted when summer passed and there was still no sign of a baby. The presence of the Puer Natus chant in the music of Mary’s Hand is a poignant reminder of the intimate connection between Mary’s Catholic faith and her deepest desire to fulfil her marriage and Tudor lineage by bearing a child. Mary’s Hand also quotes the plainsong Veni Creator Spiritus which the Queen sang in prayer as she waited for the divine guidance that she believed prompted her to accept the marriage offer from Philip of Spain.

The Tudors were a musical family and like her father and siblings, Mary was a fine musician, playing the regals and virginals (both keyboard instruments). Her skill as a lutenist was described as ‘surprising even the best performers, both by the rapidity of her hand and the style of her playing’.

Fit for a Queen To mark Mary’s coronation in 1553, Hans Eworth was commissioned to paint her portrait. This famous image inspired the designers of our costume. However our task was not simply to replicate the lavish brocade dress and accessories of the original. Our dress is a performative object in its own right, actively participating in the telling of Mary’s story by coming apart at key moments in the drama. As Mary shares increasingly personal reflections with us, she sheds both her finery and public persona until she stands before us unadorned. Creating such a costume requires specialist skills - knowledge of historical clothing and detail combined with an understanding of the specific needs of stage performers, who must be able to move and breathe freely. Designers Andie Scott and Sophie Meyer brought exactly this combination of skills to the project, having met through their work with the Performative Costume department at the London College of Fashion. The Tudor Tailor pattern-book of original Tudor dress styles and the original portrait at the Society of Antiquaries of London were our team’s principal resources contemporary with Mary herself. Modern materials and techniques made possible a dress that is visually identical to its Tudor counterpart, but lighter and constructed with concealed zips and magnets. In acknowledgement of our dress’ origin in an artwork, we have used a mixture of painting and stitching to reproduce the brocade that would have been used for Mary’s real dress.

Biographies Martin Bussey A composer, singer and conductor, Martin Bussey previously taught at Chetham’s School and now teaches at Manchester University. He directs the BBC Daily Service Singers and Chester Bach Singers. His music is available on Priory Records, Regent Records, London Independent Records, and Through a Glass, featuring Marcus Farnsworth and others, is on Resonus Classics. Di Sherlock As an actor Di has worked in theatre, multimedia performance and TV. As writer-director work includes Miss Havisham’s Expectations (Trafalgar Studios), Odyssey (Birmingham University) and Services No Longer Required with the BBC Philharmonic, part of the BBC’s WW1 commemorations. Poetry includes Come into the Garden, The Memory Poems, Written Portraits. Andie Scott Andie Scott is a designer and fabricator of costume and set for theatre, dance and circus and exhibits as a fine artist. She runs her own production house in Islington. With a background in fine art she has recently completed a Masters at the London College of Fashion. Sophie Meyer Sophie Meyer, born 1989 in the Grand-Duchy of Luxembourg obtained her BA in Costume Design at the Hochschule Hannover in 2015 and worked in theatre and film in Germany and Luxembourg. She commenced the MA Costume Design For Performance course at the London College of Fashion in 2016, from which she recently graduated with her final piece called Melusina. Clare McCaldin Clare is a lyric mezzo-soprano well-known in opera and in concert through appearances at the Royal Opera, the BBC Proms, the Edinburgh International Festival and Radio 3. She is particularly committed to the promotion and performance of contemporary vocal music, from live solo shows to recorded works written for her by composers including Stephen McNeff and Hugh Wood. McCaldin Arts McCaldin Arts was founded in 2012 and uses classical music theatre to revisit the lives and work of colourful and sometimes marginalised characters from the past, breathing new life into how we might see their character and contribution today. Previous productions include the acclaimed Vivienne (2013) on the life and mind of T. S. Eliot&#39;s first wife. The re-creation of Mary’s dress featured in the 1554 portrait by Hans Eworth was funded, in part, through a crowdfunding campaign. McCaldin Arts gratefully acknowledges the generosity of everyone who has contributed to the dress as well as to the wider project. More information about Mary’s Hand including the full libretto is available via mccaldinarts.com #MarysHand