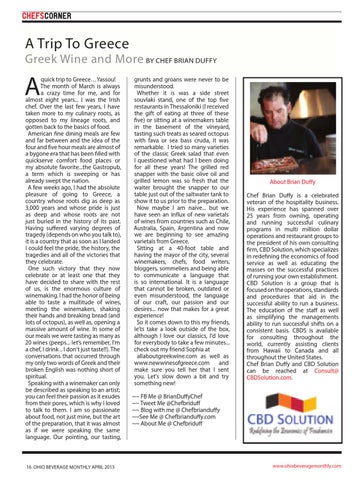 A Trip To Greece

quick trip to Greece…Yassou! The month of March is always a crazy time for me, and for almost eight years... I was the Irish chef. Over the last few years, I have taken more to my culinary roots, as opposed to my lineage roots, and gotten back to the basics of food. American fine dining meals are few and far between and the idea of the four and five hour meals are almost of a bygone era that has been filled with quickserve comfort food places or my absolute favorite...the Gastropub, a term which is sweeping or has already swept the nation. A few weeks ago, I had the absolute pleasure of going to Greece, a country whose roots dig as deep as 3,000 years and whose pride is just as deep and whose roots are not just buried in the history of its past. Having suffered varying degrees of tragedy (depends on who you talk to), it is a country that as soon as I landed I could feel the pride, the history, the tragedies and all of the victories that they celebrate. One such victory that they now celebrate or at least one that they have decided to share with the rest of us, is the enormous culture of winemaking. I had the honor of being able to taste a multitude of wines, meeting the winemakers, shaking their hands and breaking bread (and lots of octopus), as well as, opening a massive amount of wine. In some of our meals we were tasting as many as 20 wines (peeps... let’s remember, I&#39;m a chef, I drink .. I don&#39;t just taste!!). The conversations that occurred through my only two words of Greek and their broken English was nothing short of spiritual. Speaking with a winemaker can only be described as speaking to an artist; you can feel their passion as it exudes from their pores, which is why I loved to talk to them. I am so passionate about food, not just mine, but the art of the preparation, that it was almost as if we were speaking the same language. Our pointing, our tasting,

grunts and groans were never to be misunderstood. Whether it is was a side street souvlaki stand, one of the top five restaurants in Thessaloniki (I received the gift of eating at three of these five) or sitting at a winemakers table in the basement of the vineyard, tasting such treats as seared octopus with fava or sea bass cruda, it was remarkable. I tried so many varieties of the classic Greek salad that even I questioned what had I been doing for all these years! The grilled red snapper with the basic olive oil and grilled lemon was so fresh that the waiter brought the snapper to our table just out of the saltwater tank to show it to us prior to the preparation. Now maybe I am naive... but we have seen an influx of new varietals of wines from countries such as Chile, Australia, Spain, Argentina and now we are beginning to see amazing varietals from Greece. Sitting at a 40-foot table and having the mayor of the city, several winemakers, chefs, food writers, bloggers, sommeliers and being able to communicate a language that is so international. It is a language that cannot be broken, outdated or even misunderstood, the language of our craft, our passion and our desires... now that makes for a great experience! So it comes down to this my friends, le’ts take a look outside of the box, although I love our classics, I&#39;d love for everybody to take a few minutes... check out my friend Sophia at allaboutgreekwine.com as well as www.newwinesofgreece.com and make sure you tell her that I sent you. Let&#39;s slow down a bit and try something new!

About Brian Duffy Chef Brian Duffy is a celebrated veteran of the hospitality business. His experience has spanned over 25 years from owning, operating and running successful culinary programs in multi million dollar operations and restaurant groups to the president of his own consulting firm, CBD Solution, which specializes in redefining the economics of food service as well as educating the masses on the successful practices of running your own establishment. CBD Solution is a group that is focused on the operations, standards and procedures that aid in the successful ability to run a business. The education of the staff as well as simplifying the managements ability to run successful shifts on a consistent basis. CBDS is available for consulting throughout the world, currently assisting clients from Hawaii to Canada and all throughout the United States. Chef Brian Duffy and CBD Solution can be reached at Consult@ CBDSolution.com.

The Ohio Beverage Monthly is a magazine for the alcohol beverage industry in Ohio.