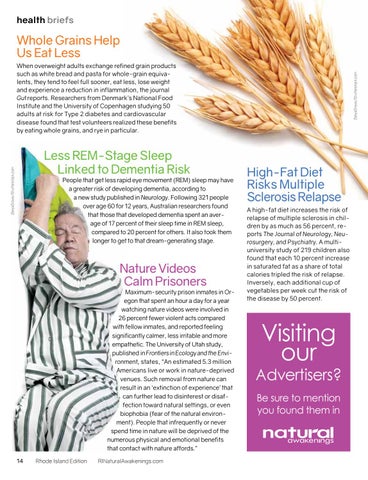 People that get less rapid eye movement (REM) sleep may have a greater risk of developing dementia, according to a new study published in Neurology. Following 321 people over age 60 for 12 years, Australian researchers found that those that developed dementia spent an average of 17 percent of their sleep time in REM sleep, compared to 20 percent for others. It also took them longer to get to that dream-generating stage.

Maximum-security prison inmates in Oregon that spent an hour a day for a year watching nature videos were involved in 26 percent fewer violent acts compared with fellow inmates, and reported feeling significantly calmer, less irritable and more empathetic. The University of Utah study, published in Frontiers in Ecology and the Environment, states, “An estimated 5.3 million Americans live or work in nature-deprived venues. Such removal from nature can result in an ‘extinction of experience’ that can further lead to disinterest or disaffection toward natural settings, or even biophobia (fear of the natural environment). People that infrequently or never spend time in nature will be deprived of the numerous physical and emotional benefits that contact with nature affords.” 14

When overweight adults exchange refined grain products such as white bread and pasta for whole-grain equivalents, they tend to feel full sooner, eat less, lose weight and experience a reduction in inflammation, the journal Gut reports. Researchers from Denmark’s National Food Institute and the University of Copenhagen studying 50 adults at risk for Type 2 diabetes and cardiovascular disease found that test volunteers realized these benefits by eating whole grains, and rye in particular.

High-Fat Diet Risks Multiple Sclerosis Relapse A high-fat diet increases the risk of relapse of multiple sclerosis in children by as much as 56 percent, reports The Journal of Neurology, Neurosurgery, and Psychiatry. A multiuniversity study of 219 children also found that each 10 percent increase in saturated fat as a share of total calories tripled the risk of relapse. Inversely, each additional cup of vegetables per week cut the risk of the disease by 50 percent.

Advertisers? Be sure to mention you found them in 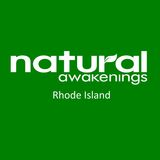