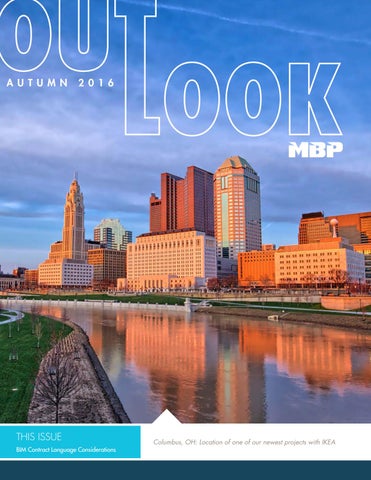 Columbus, OH: Location of one of our newest projects with IKEA

ver the past several weeks, I had a few clients ask for my perspective on what should be included in BIM contract language. With that said, I thought I would share my thoughts here so that others can benefit. Prior to developing any contract language, the most important item to consider is the overall purpose of BIM implementation. Always keep in mind that BIM does not change your underlining purpose, but rather methods and tools used to achieve that purpose. Your purpose should remain constant and be clearly communicated through the contract language. After you have clearly defined the purpose (such as better facility documentation), focus on the desired end result (the deliverable) without

necessarily defining the path needed to get there. If you focus on defining a path too early, the route you pick may become outdated prior to the project startup. Additionally, requiring specific BIM uses and software contractually may limit the outcome and overall effectiveness of the BIM process. A best practice is to group the BIM deliverables and BIM uses collaboratively. For example, if you want the design team to coordinate the model prior to creating drawings, require the delivery of a coordination model rather than specifying a coordination process. For each deliverable, you’ll need to start thinking about: ▪▪ Purpose: What is the objective of the BIM deliverable? What will the deliverable be used for?

(Note: Don’t require deliverables that will not be utilized later in the project.) ▪▪ Elements: What facility elements or systems of the facility will be required to be included as a deliverable? ▪▪ Level of Development (LOD): What is the necessary level of reliability of an elements geometry and information? ▪▪ Data: What data needs to be attached to each element within the deliverable, i.e. is the data to identify equipment or to refer to specification information? ▪▪ Format: What format/software) does the deliverable have to be compatible with (e.g. rvt, .dwg, .xlsx, .pdf, .ifc, etc.)? This also includes any applicable standards.

Remember, each deliverable needs to be reviewed to ensure the team is meeting the requirements. Therefore, if you are unable to review a deliverable, it should not be required. Additionally, remember to consider more general requirements, such as requiring a BIM Project Execution Plan (which demonstrates how the team will be developing deliverables), all necessary definitions, and defining the ownership of each deliverable. This may not be an all-inclusive list but should be a good starting point. Remember to “begin with the end in mind” and try focusing on deliverables

that will benefit all phases; from the design, construction, and operation of a facility. For more information on BIM Contract Language, please see the project procurement section of the BIM Planning Guide for Facility Owners at bim.psu.edu. What other items do you feel should be part of BIM contract language?

Ralph Kreider is Director of Digital Facilities of MBP and can be reached at rkreider@mbpce.com.

Doug Bachman, CBCP, TAB-CP has been promoted to Project Manager. Previously Senior Commissioning Agent, Doug has been with the firm for two years. He brings more than 24 years of project management and commissioning experience in educational, commercial, and industrial construction. Bryn Bernstein, SPHR was promoted to Human Resources Manager, previously Human Resources Benefits and Administration Manager. Bryn has been with MBP for more than ten years.

ATLANTA, GA Jessica Fulton joined our Atlanta team as Senior Project Manager. She has more than 11 years of program management experience, including responsibility for planning, design, construction, and maintenance of multiple publicly-funded transportation transit, education, and aviation projects for state and local government. CHESAPEAKE, VA Greg Vuyovich joined MBP as Project Manager. He has more than 30 years of experience as a construction management professional with a strong background in the construction of medical and laboratory facilities. Joe Watson, PE, CxA, LEED AP, BEMP joined our Chesapeake team as Senior Commissioning Engineer. He is a creative and business-savvy facilities energy 4 |

consultant with more than 30 years of progressive experience across a broad range of building energy consulting functions and diverse industry segments. As a building systems consultant for over 17 years, he has experience working directly with building owners and facility managers in the government, education, commercial, industrial, and healthcare sectors. COLUMBIA, MD Michael Brannon joined the firm as Project Manager. He has more than 20 years of project management experience. Allan Shad, CPE joined our Columbia team as Project Manager. He has more than 28 years of experience as a high-level estimator in commercial construction, and a total of 32 years of experience in performing construction management services.

review, and claims and schedule delay analysis services for K-12, higher education, military, correctional, residential, performing arts, medical, laboratory, hospital, and site utility projects. He most recently served as Project Manager of the firm and has been a shareholder since 2015. Duncan Stewart, PE, CCM, PSP was promoted to Branch Manager. Duncan joined the firm in 1999 and became a shareholder in 2014. He has been serving as the Branch Operations Manager in Richmond since 2011, and has managed extensive growth in transportation, State, and Municipality sector work. Don Terch, CBCP was promoted to Project Manager from Senior Consultant. Don has more than 20 years of extensive experience in coordinating with owners, architects, and engineers, managing contractors/ subcontractors, and conducting construction meetings during all phases of design and construction. He has been with MBP for more than two years. Stephanie Veliz has been promoted to Marketing Manager. Previously Senior Marketing Coordinator, Stephanie has been with the firm for more than two years. Kristen Young, PE, CEP, LEED AP has been promoted Senior Engineer from Lead Engineer. Kristen has been with MBP for more than eight years and brings over eight years of experience, enthusiasm, a strong educational background, and experience in highereducation, residential, and civil construction. PHILADELPHIA, PA Mike Fox joined our Philadelphia team as Construction Manager. He brings more than 38 years of construction experience, to include 21 years of project management experience and 17 years of industrial power plant operations and maintenance experience, including industrial water and wastewater treatment plants. RICHMOND, VA Bill Sprinkle, PE joined MBP as Project Manager. He possesses more than 30 years of construction administration and management experience. Scott Guynes joined our Richmond team as Senior Consultant. He has more than 20 years of experience and is an accomplished electrical and mechanical systems professional with field and leadership contributions in energy management and building automation. OUTLOOK | 5

MBP HONORED WITH CMAA’S NATIONAL PROJECT ACHIEVEMENT AWARD FOR WORK ON VSU PROJECT MBP was recently presented with a national Project Achievement Award in the category of Buildings, New Construction, Constructed Value Less than $100 Million for its work on the Virginia State University Multipurpose Center project.

MBP RANKED IN ENGINEERING NEWS-RECORD’S 2016 TOP LISTS MBP has once again been named as one of the nation’s top program management and construction management-for-fee firms by Engineering News-Record (ENR), a leading professional publication for the engineering and construction industry. MBP ranked #25 on the Top 50 Program Management Firms list, two spots up from last year, and at #36 on the Top 100 Construction Management-For-Fee Firms list. For the past 18 years, MBP has been recognized by ENR as a Top Firm.

MBP NAMED 2016 TOP WORKPLACE BY THE WASHINGTON POST MBP was ranked #38 in the 75 highest ranking small companies in the D.C. area by The Washington Post as a 2016 Top Workplaces.

Chairman and CEO Charles E. Bolyard, Jr., CCM, PSP, CFCC has been elected to a one-year term as PresidentElect of AACE International. Bolyard had previously served the Association as Regional Director, Chair of the CFCC Certification Committee, Co-Chair of the Certification Board, and Vice President – Certification. He has been an active member since 1991. He will become President of the Association and will be inducted at the organization’s annual meeting in Orlando, Florida in June 2017. He was named a Fellow of AACE in 2010. Khadka Named Fellow of AACE International Sagar B. Khadka, CCP, PSP, DRMP, Director of Project Risk Management Services, has been named a Fellow of AACE International. Fellow status is a selective and prestigious honor in recognition of professional attainment and significant accomplishment in all aspects of the principles and application of Total Cost Management. Khadka has served the Association as a member of the Decision and Risk Management Professional (DRMP) Task Force that developed the DRMP Certification. He has been an active member of AACE since 2004, joined the Certification Board in 8 |

2010, and served as DRMP Committee Chair on the Board from 2013 – 2016. Khadka was named Chairman of AACE International’s Certification Board in June 2016. Peck Elected to National Academy of Construction Blake Peck, PE, CCM, FCMAA, has been elected to the National Academy of Construction. The appointment recognizes and honors individuals for their distinguished contributions and accomplishments to the industry. Peck was inducted at a ceremony in his honor in Napa Valley on October 20, 2016. Payne Elected Chair-Elect of CMAA Chris Payne, PE, CCM, Executive Vice President, has been elected as the Chair-Elect to the Construction Management Association of America’s (CMAA) National Board of Directors. Payne has been a Board member for the last seven years, having previously served as Treasurer and Director on the National Board, and has been an active member since 1999. In 2017, Payne will assume the role of Chair of the organization.