What We Can Do When When There's Nothing To Be Done 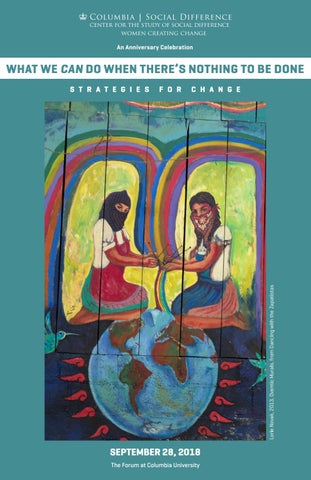 Lorie Novak, 2013, Oventic Murals, from Dancing with the Zapatistas

SEPTEMBER 28, 2018 The Forum at Columbia University

THE CENTER FOR THE STUDY OF SOCIAL DIFFERENCE is an interdisciplinary research center supporting collaborative projects that address gender, race, sexuality, and other forms of inequality to foster ethical and progressive social change. Bringing Arts and Sciences faculty into conversation with faculty from Columbia’s professional schools and Global Centers, along with scholars, artists, writers, and policymakers in the United States and abroad, CSSD deepens Columbia’s partnerships at home and abroad. The Center’s work has two overarching research themes: Women Creating Change and Imagining Justice.

How can we imagine justice, practice solidarity and create change across barriers of social difference in todayâ&amp;#x20AC;&amp;#x2122;s political landscape? As the acceptance of inequality has become the new norm to a degree we might have deemed unthinkable, and as public dialogue has reached an impasse, protest and resistance continue. This conference brings together scholars, artists, and practitioners from around the globe whose work can inspire new ways of thinking, seeing and listening, and productive strategies of intervention for our time.

in Turkey (with Fethiye Çetin, trans. Maureen Freely, 2014). She is one of the co-editors of Women Mobilizing Memory (forthcoming, 2019). María José Contreras Lorenzini is a performance artist and Professor of Theater at the Faculty of the Arts of Universidad Católica de Chile. Her academic research and artistic creation explore the relation between the body, memory and performance. Recent public performances in Santiago include: “Suelo” which confronted the

relationship between surveillance and human rights, and “Aquí” which marked places where women had been assassinated in the first months of the dictatorship. She is one of the co-editors of Women Mobilizing Memory (forthcoming, 2019). Noura Erakat is a human rights attorney and an Assistant Professor at George Mason University. She is a co-founding editor of Jadaliyya e-zine and an Editorial Committee member of the Journal of Palestine Studies. Erakat is the co-editor of Aborted State?: The UN Initiative and New Palestinian Junctures. More recently, she released a pedagogical

project on the Gaza Strip and Palestine, which includes a short multimedia documentary, Gaza In Context. She is the producer of the short video, Black Palestinian Solidarity. Erakat is the author of Justice for Some: Law in the Question of Palestine (forthcoming, 2019). Keeanga-Yamahtta Taylor is an Assistant Professor of African American Studies at Princeton University. Taylor’s research interests include race, inequality and public policy along with the multiple iterations of Black politics, Black radicalism and social movements. Taylor is the author of From #BlackLivesMatter to Black Liberation

(2016), winner of a Cultural Freedom Award for an Especially Notable Book from the Lannan Foundation. Taylor’s edited collection, How We Get Free: Black Feminism and the Combahee River Collective, won the 2018 Lambda Literary Award for LGBTQ Nonfiction.

Farah Jasmine Griffin, Moderator, is the William B. Ransford Professor of English and Comparative Literature and African-American Studies, and Director of the Institute for Research in African-American Studies, at Columbia University. Griffin’s major fields of interest are American and African-American literature, music, history and politics. Her most recent book is Harlem Nocturne: Women Artists and Progressive Politics During World War II (2013). CROSSING BORDERS, REFUGEES, MIGRANTS, STATELESS LIVES Diana Taylor is University Professor and Professor of Performance Studies and Spanish at New York University. She is the author of many books, including: Theatre of Crisis: Drama and Politics in Latin America (1991; 2014); Disappearing Acts: Spectacles of Gender and Nationalism in Argentina’s ‘Dirty War’ (1997); The Archive and the DIANA TAYLOR

Repertoire: Performing Cultural Memory in the Americas (2003); PERFORMANCE (2012; 2016); and Villa Grimaldi (2017). Her new book ¡Presente! The Politics of Presence is forthcoming in 2019. Taylor is the Founding Director of the Hemispheric Institute of Performance and Politics. Lyndsey Stonebridge is Professor of Humanities and Human Rights, University of Birmingham, UK. She is the author of The Judicial Imagination: Writing after Nuremberg (winner of the British Academy Rose Mary Crawshay Prize 2016). Her new book, Placeless People: Writing, Rights, and Refugees, will be published later this year. She

is also currently writing Writing and Righting: Literature in an Age of Human Rights, and working on a large collaborative project on refugeerefugee humanitarianism and alternative political sovereignties, Refugee Hosts. Debarati Sanyal is Professor of French at the University of CaliforniaBerkeley. She is the author of Memory and Complicity: Migrations of Holocaust Remembrance (2015). Her current book addresses the cultural forms of testimony in today’s refugee ‘crisis’. Recent articles include “Calais’s ‘Jungle’: Refugees, Biopolitics, and the Arts

Juan Carlos Ruiz is the sixth Lutheran Pastor at Good Shepherd in Bay Ridge, Brooklyn and an ordained Catholic priest. Coming from Mexico as an undocumented immigrant, his experience crossing the border radicalized him, leading to a life of extensive organizing and community building. He co-founded the Migrant Ministry for the Diocese of JUAN CARLOS RUIZ

Paterson, the floating parish of Our Lady of Guadalupe, as well as the National New Sanctuary. His roles have also included Acting Director for Youth Ministries for Peace and Justice, and Director for Disaster Response for the Episcopal Diocese of Long Island.

Mae M. Ngai, Moderator, Lung Family Professor of Asian American Studies and Professor of History at Columbia University, is a U.S. legal and political historian interested in questions of immigration, citizenship, and nationalism. She is author of the award winning Impossible Subjects: Illegal Aliens and the Making of Modern America (2004) and The Lucky Ones: One Family and the Extraordinary Invention of Chinese America (2010). She is now writing The Chinese Question, and Nation of Immigrants: A Short History of an Idea.

ARTS OF INTERVENTION Ricardo Dominguez is Associate Professor and the MFA Director of Visual Arts at the University of California, San Diego. Dominguez was a founding member of Critical Art Ensemble (1986) and a co-founder of The Electronic Disturbance Theater (EDT). His recent EDT 2.0/b.a.n.g. lab project, with Brett Stalbaum, Micha Cardenas, Amy Sara Carroll, RICARDO DOMINGUEZ

and Elle Mehrmand, the Transborder Immigrant Tool (a GPS cell phone safety net tool for crossing the Mexico/US border) was the winner of “Transnational Communities Award” (2008) and was also under investigation by the US Congress in 2009-2010 and was reviewed by Glenn Beck in 2010 as a gesture that potentially “dissolved” the U.S. border with its poetry. He also is co-founder of *particle group*, with artists Diane Ludin, Nina Waisman, and Amy Sara Carroll, whose art project about nano-toxicology entitled “Particles of Interest: Tales of the Matter Market” has been recently presented in various venues.

Sama Alshaibi is Professor and Co-Chair of Photography at University of Arizona, Tucson, where she was granted the title “1885 Distinguished Scholar.” She received a Visual Arts Grant by the Arab Fund for Arts and Culture in 2017, the Arizona Commission on the Arts “Visual Arts Grant” in 2018, and was awarded a Fulbright Scholar Fellowship (2014-2015) as part of a residency at the Palestine Museum in Ramallah. Alshaibi’s monograph, Sama Alshaibi: Sand Rushes In (2015) presents her Silsila series, which probes the human dimensions of migration, borders, and environmental demise. Miya Masaoka is a composer, sound artist and musician based in New York City. Masaoka is Director of the Sound Art in the Visual Studies MFA program at Columbia University School of the Arts. Classically trained, her work operates at the intersection of spatialized sound, frequency, perception, and performance, with social and historical references. Masaoka has taught at NYU and the Milton Avery School of the Arts at Bard College, and her work has been exhibited at the Venice Biennale, MoMA PS1, Institute of Contemporary Art Philadelphia, and the Museum of Contemporary Art Chicago. She has been named a Park Avenue Armory Studio Artist for 2019, and is commissioned to create for Sonic Innovations at the Caramoor in 2019. Saidiya Hartman, Professor of English, Comparative Literature, and Gender Studies at Columbia University, specializes in African-American and American literature and cultural history, slavery, law and literature, and performance studies. She is the author of Scenes of Subjection: Terror, Slavery, and Self-Making in Nineteenth Century America (1997) and Lose Your Mother: A Journey Along the Atlantic Slave Route (2007). Her new book, Wayward Lives, Beautiful Experiments (2019), examines the social upheaval and radical transformation of everyday life that took place in the emergent black ghetto in the early decades of the 20th century. She is a Guggenheim Fellow for 2018-2019.

Carol Becker, Moderator, is Professor of Arts and Dean of Faculty at Columbia University School of the Arts. She has published numerous articles and books on cultural criticism including: The Invisible Drama: Women and the Anxiety of Change (translated into seven languages); The Subversive Imagination: Artists, Society and Social Responsibility; Zones of Contention: Essays on Art, Institutions, Gender, and Anxiety; Surpassing the Spectacle: Global Transformations and the Changing Politics of Art and Thinking in Place: Art, Action, and Cultural Production. She is a member of the Global Agenda Council on the Role of Art in Society for the World Economic Forum.

FACING THE PRESENT, IMAGINING THE FUTURE Masha Gessen is a journalist and the author of many books, including Perfect Rigor: A Genius and the Mathematical Breakthrough of the Century (2009); Blood Matters: From Inherited Illness to Designer Babies, How the World and I Found Ourselves in the Future of the Gene (2008); Ester and Ruzya: How My Grandmothers Survived Hitler’s War MASHA GESSEN

and Stalin’s Peace (2004); Words Will Break Cement: The Passion of Pussy Riot (2014); The Brothers: The Road to an American Tragedy (2015); and Where the Jews Aren’t: The Sad and Absurd Story of Birobidzhan, Russia’s Jewish Autonomous Region (2016). Gessen’s most recentbook, The Future is History: How Totalitarianism Reclaimed Russia (2017), is the winner of the 2017 National Book Award for nonfiction. Judith Butler is Maxine Elliot Professor in the Department of Comparative Literature and the Program of Critical Theory at the University of California, Berkeley. Her most recent books include: Parting Ways: Jewishness and the Critique of Zionism (2012); Dispossessions: The Performative in the Political co-authored with

Athena Athanasiou (2013); Senses of the Subject (2015); Notes Toward a Performative Theory of Assembly (2015); and the co-edited Vulnerability in Resistance (2016). She is currently completing a book on non-violence to be published in 2019. Her future projects include work on messianic gestures in Kafka and Benjamin, philosophical fictions in Freud’s work, and gender in translation.

Bernard E. Harcourt, Moderator, is the Isidor and Seville Sulzbacher Professor of Law, Professor of Political Science, Executive Director of the Eric H. Holder Initiative for Civil and Political Rights, and Founding Director of the Columbia Center for Contemporary Critical Thought at Columbia University. He has authored several books, including The Counterrevolution: How Our Government Went to War Against Its Own Citizens (2018). Harcourt represented death row inmates in Montgomery, Ala., at what is now the Equal Justice Initiative. He continues to represent inmates sentenced to death or life imprisonment without parole pro bono. He has also served on human rights missions in South Africa and Guatemala.

WITH THANKS TO OUR CO-SPONSORS:

CENTER FOR GENDER &amp; SEXUALITY LAW CENTER FOR THE STUDY OF ETHNICITY AND RACE COLUMBIA CENTER FOR CONTEMPORARY CRITICAL THOUGHT COLUMBIA GLOBAL CENTERS OFFICE OF THE VICE PROVOST FOR FACULTY DIVERSITY AND INCLUSION SCHOOL OF THE ARTS DEAN OF HUMANITIES DEAN OF SOCIAL SCIENCES DEPARTMENT OF ANTHROPOLOGY DEPARTMENT OF ENGLISH AND COMPARATIVE LITERATURE DEPARTMENT OF LATIN AMERICAN AND IBERIAN CULTURES DIVISION OF ARTS AND SCIENCES GENDER &amp; PUBLIC POLICY SPECIALIZATION AT THE SCHOOL OF INTERNATIONAL AND PUBLIC AFFAIRS INSTITUTE FOR COMPARATIVE LITERATURE AND SOCIETY INSTITUTE FOR RESEARCH ON AFRICAN-AMERICAN STUDIES INSTITUTE FOR RESEARCH ON WOMEN, GENDER, AND SEXUALITY MIDDLE EAST INSTITUTE SOCIETY OF FELLOWS AND HEYMAN CENTER FOR THE HUMANITIES BARNARD CENTER FOR RESEARCH ON WOMEN BARNARD COLLEGE WOMENâ&amp;#x20AC;&amp;#x2122;S, GENDER AND SEXUALITY STUDIES THE HEMISPHERIC INSTITUTE OF PERFORMANCE AND POLITICS

What We Can Do When When There's Nothing To Be Done 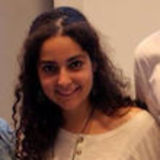