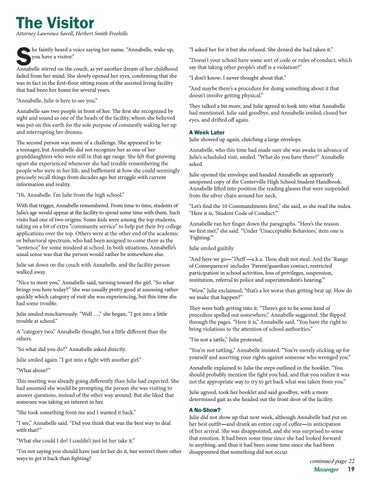 he faintly heard a voice saying her name. “Annabelle, wake up, you have a visitor.”

Annabelle stirred on the couch, as yet another dream of her childhood faded from her mind. She slowly opened her eyes, confirming that she was in fact in the first-floor sitting room of the assisted living facility that had been her home for several years. “Annabelle, Julie is here to see you.” Annabelle saw two people in front of her. The first she recognized by sight and sound as one of the heads of the facility, whom she believed was put on this earth for the sole purpose of constantly waking her up and interrupting her dreams. The second person was more of a challenge. She appeared to be a teenager, but Annabelle did not recognize her as one of her granddaughters who were still in that age range. She felt that gnawing upset she experienced whenever she had trouble remembering the people who were in her life, and bafflement at how she could seemingly precisely recall things from decades ago but struggle with current information and reality. “Hi, Annabelle. I’m Julie from the high school.” With that trigger, Annabelle remembered. From time to time, students of Julie’s age would appear at the facility to spend some time with them. Such visits had one of two origins. Some kids were among the top students, taking on a bit of extra “community service” to help put their Ivy college applications over the top. Others were at the other end of the academic or behavioral spectrum, who had been assigned to come there as the “sentence” for some misdeed at school. In both situations, Annabelle’s usual sense was that the person would rather be somewhere else. Julie sat down on the couch with Annabelle, and the facility person walked away. “Nice to meet you,” Annabelle said, turning toward the girl. “So what brings you here today?” She was usually pretty good at assessing rather quickly which category of visit she was experiencing, but this time she had some trouble. Julie smiled mischievously. “Well …,” she began, “I got into a little trouble at school.” A “category two,” Annabelle thought, but a little different than the others. “So what did you do?” Annabelle asked directly. Julie smiled again. “I got into a fight with another girl.” “What about?” This meeting was already going differently than Julie had expected. She had assumed she would be prompting the person she was visiting to answer questions, instead of the other way around. But she liked that someone was taking an interest in her. “She took something from me and I wanted it back.” “I see,” Annabelle said. “Did you think that was the best way to deal with that?” “What else could I do? I couldn’t just let her take it.” “I’m not saying you should have just let her do it, but weren’t there other ways to get it back than fighting?

“I asked her for it but she refused. She denied she had taken it.” “Doesn’t your school have some sort of code or rules of conduct, which say that taking other people’s stuff is a violation?” “I don’t know; I never thought about that.” “And maybe there’s a procedure for doing something about it that doesn’t involve getting physical.” They talked a bit more, and Julie agreed to look into what Annabelle had mentioned. Julie said goodbye, and Annabelle smiled, closed her eyes, and drifted off again.

Julie showed up again, clutching a large envelope. Annabelle, who this time had made sure she was awake in advance of Julie’s scheduled visit, smiled. “What do you have there?” Annabelle asked. Julie opened the envelope and handed Annabelle an apparently unopened copy of the Centerville High School Student Handbook. Annabelle lifted into position the reading glasses that were suspended from the silver chain around her neck. “Let’s find the 10 Commandments first,” she said, as she read the index. “Here it is, ‘Student Code of Conduct.’” Annabelle ran her finger down the paragraphs. “Here’s the reason we first met,” she said. “Under ‘Unacceptable Behaviors,’ item one is ‘Fighting.’” Julie smiled guiltily. “And here we go—‘Theft’—a.k.a. Thou shalt not steal. And the ‘Range of Consequences’ includes ‘Parent/guardian contact, restricted participation in school activities, loss of privileges, suspension, restitution, referral to police and superintendent’s hearing.’” “Wow,” Julie exclaimed, “that’s a lot worse than getting beat up. How do we make that happen?” They were both getting into it. “There’s got to be some kind of procedure spelled out somewhere,” Annabelle suggested. She flipped through the pages. “Here it is,” Annabelle said. “You have the right to bring violations to the attention of school authorities.” “I’m not a tattle,” Julie protested. “You’re not tattling,” Annabelle insisted. “You’re merely sticking up for yourself and asserting your rights against someone who wronged you.” Annabelle explained to Julie the steps outlined in the booklet. “You should probably mention the fight you had, and that you realize it was not the appropriate way to try to get back what was taken from you.” Julie agreed, took her booklet and said goodbye, with a more determined gait as she headed out the front door of the facility. 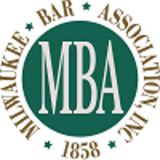