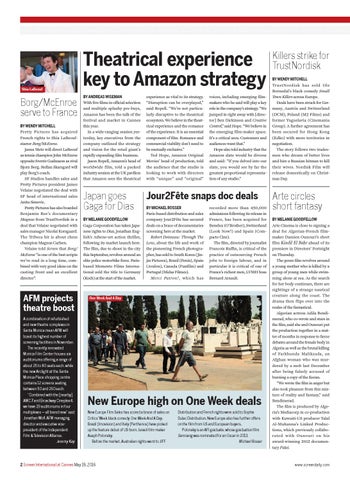 AFM projects theatre boost A combination of refurbished and new theatre complexes in Santa Monica mean AFM will boast its highest number of screening facilities in November. The recently renovated Monica Film Center houses six auditoriums offering a range of about 25 to 80 seats each, while the new Arclight at the Santa Monica Place shopping centre contains 12 screens seating between 50 and 260 each. “Combined with the [nearby] AMC 7 and Broadway Cineplex 4, we have 29 auditoriums in four multiplexes — all brand new,” said Jonathan Wolf, AFM managing director and executive vicepresident of the Independent Film & Television Alliance. Jeremy Kay

With five films in official selection and multiple splashy pre-buys, Amazon has been the talk of the festival and market in Cannes this year. In a wide-ranging session yesterday, key executives from the company outlined the strategy and vision for the retail giant’s rapidly expanding film business. Jason Ropell, Amazon’s head of worldwide film, told a packed industry session at the UK pavilion that Amazon sees the theatrical

Gaga Corporation has taken Japanese rights to Dias, Jonathan English’s Athens-set action thriller, following its market launch here. The film, due to shoot in the city this September, revolves around an elite police motorbike force. Parisbased Memento Films International sold the title to Germany (Koch) at the start of the market.

experience as vital to its strategy. “Disruption can be overplayed,” said Ropell. “We’re not particularly disruptive to the theatrical ecosystem. We believe in the theatrical experience and the romance of the experience. It is an essential component of film. Romance and commercial viability don’t need to be mutually exclusive.” Ted Hope, Amazon Original Movies’ head of production, told the audience that the studio is looking to work with directors with “unique” and “original”

voices, including emerging filmmakers who he said will play a key role in the company’s strategy. “We jumped in right away with [director] Ben Dickinson and Creative Control,” said Hope. “We believe in the emerging film-maker space. It’s a critical area. Customers and audiences want that.” Hope also told industry that the Amazon slate would be diverse and said: “If you delved into our slate, you would see by far the greatest proportional representation of any studio.”

Paris-based distribution and sales company Jour2Fête has secured deals on a brace of documentaries screening here at the market. Robert Doisneau: Through The Lens, about the life and work of the pioneering French photographer, has sold to South Korea (Jinjin Pictures), Brazil (Fenix), Spain (Avalon), Canada (Funfilm) and Portugal (Midas Filmes). Merci Patron!, which has

recorded more than 450,000 admissions following its release in France, has been acquired for Benelux (O’Brother), Switzerland (Look Now!) and Spain (Compacto Cine). The film, directed by journalist Francois Ruffin, is critical of the practice of outsourcing French jobs to foreign labour, and in particular it is critical of one of France’s richest men, LVMH boss Bernard Arnault.

one Week And A day

new europe high on one Week deals New Europe Film Sales has scored a brace of sales on Critics’ Week black comedy One Week And A Day. Brazil (Imovision) and Italy (Parthenos) have picked up the feature debut of US-born, Israeli film-maker Asaph Polonsky. Before the market, Australian rights went to JIFF

Distribution and French rights were sold to Sophie Dulac Distribution. New Europe also has further offers on the film from US and European buyers. Polonsky is an AFI graduate, whose graduation film Samnang was nominated for an Oscar in 2013. Michael Rosser

TrustNordisk has sold Ole Bornedal’s black comedy Small Town Killers across Europe. Deals have been struck for Germany, Austria and Switzerland (DCM), Poland (M2 Films) and former Yugoslavia (Cinemania Group). A further agreement has been secured for Hong Kong (Edko) with more territories in negotiation. The story follows two tradesmen who dream of better lives and hire a Russian hitman to kill their wives. Nordisk Film will release domestically on Christmas Day.

Arte Cinema is close to signing a deal for Algerian-French filmmaker Damien Ounouri’s short film Kindil El Bahr ahead of its premiere in Directors’ Fortnight on Thursday. The genre film revolves around a young mother who is killed by a group of young men while swimming alone at sea. As the search for her body continues, there are sightings of a strange nautical creature along the coast. The drama then flips over into the realm of the fantastical. Algerian actress Adila Bendimerad, who co-wrote and stars in the film, said she and Ounouri put the production together in a matter of months in response to fierce debates around the female body in Algeria as well as the brutal killing of Farkhunda Malikzada, an Afghan woman who was murdered by a mob last December after being falsely accused of burning a copy of the Koran. “We wrote the film in anger but also took pleasure from this mixture of reality and fantasy,” said Bendimerad. The film is produced by Algeria’s Mediacorp in co-production with Kuwaiti-US producer Talal Al-Muhanna’s Linked Productions, which previously collaborated with Ounouri on his award-winning 2012 documentary Fidai.