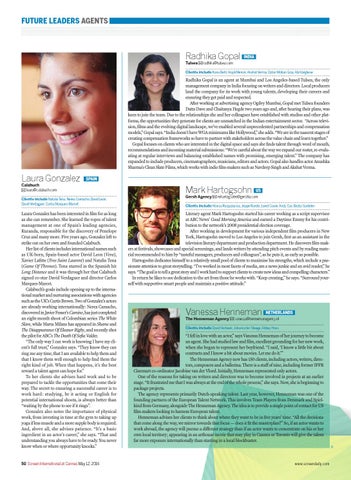 Radhika Gopal is an agent at Mumbai and Los Angeles-based Tulsea, the only management company in India focusing on writers and directors. Local producers laud the company for its work with young talents, developing their careers and ensuring they get paid and respected. After working at advertising agency Ogilvy Mumbai, Gopal met Tulsea founders Datta Dave and Chaitanya Hegde two years ago and, after hearing their plans, was keen to join the team. Due to the relationships she and her colleagues have established with studios and other platforms, the opportunities they generate for clients are unmatched in the Indian entertainment sector. “Across television, films and the evolving digital landscape, we’ve enabled several unprecedented partnerships and compensation models,” Gopal says. “India doesn’t have WGA minimums like Hollywood,” she adds. “We are in the nascent stages of creating compensation frameworks so have to partner with stakeholders across the value chain and learn together.” Gopal focuses on clients who are interested in the digital space and says she finds talent through word of mouth, recommendations and incoming material submissions: “We’re careful about the way we expand our roster, re-evaluating at regular interviews and balancing established names with promising, emerging talent.” The company has expanded to include producers, cinematographers, musicians, editors and actors. Gopal also handles actor Anushka Sharma’s Clean Slate Films, which works with indie film-makers such as Navdeep Singh and Akshat Verma.

Laura Gonzalez has been interested in film for as long as she can remember. She learned the ropes of talent management at one of Spain’s leading agencies, Kuranda, responsible for the discovery of Penelope Cruz and many more. Five years ago, Gonzalez left to strike out on her own and founded Calabuch. Her list of clients includes international names such as UK-born, Spain-based actor David Leon (Vera), Xavier Lafitte (Yves Saint Laurent) and Natalia Tena (Game Of Thrones). Tena starred in the Spanish hit Long Distance and it was through her that Calabuch signed co-star David Verdaguer and director Carlos Marques-Marcet. Calabuch’s goals include opening up to the international market and nurturing associations with agencies such as the UK’s Curtis Brown. Two of Gonzalez’s actors are already working internationally: Nerea Camacho, discovered in Javier Fesser’s Camino, has just completed an eight-month shoot of Colombian series The White Slave, while Marta Milans has appeared in Shame and The Disappearance Of Eleanor Rigby, and recently shot the pilot for ABC’s The Death Of Sofia Valdez. “The only way I can work is knowing I have my client’s full trust,” Gonzalez says. “They know they can ring me any time, that I am available to help them and that I know them well enough to help find them the right kind of job. When that happens, it’s the best reward a talent agent can hope for.” To her clients she advises hard work and to be prepared to tackle the opportunities that come their way. The secret to ensuring a successful career is to work hard: studying, be it acting or English for potential international shoots, is always better than “waiting by the phone to see if it rings”. Gonzalez also notes the importance of physical work, from investing in time at the gym to taking up yoga if less muscle and a more supple body is required. And, above all, she advises patience. “It’s a basic ingredient in an actor’s career,” she says. “That and understanding you always have to be ready. You never know when or where opportunity knocks.”

Literary agent Mark Hartogsohn started his career working as a script supervisor at ABC News’ Good Morning America and earned a Daytime Emmy for his contribution to the network’s 2008 presidential election coverage. After working in development for various independent film producers in New York, Hartogsohn moved to Los Angeles to join Gersh, first as an assistant in the television literary department and production department. He discovers film-makers at festivals, showcases and special screenings, and lands writers by attending pitch events and by reading material recommended to him by “tasteful managers, producers and colleagues”, as he puts it, as early as possible. Hartogsohn dedicates himself to a relatively small pool of clients to maximise his strengths, which include a passionate attention to great storytelling. “I’ve worked in most facets of media, am a news junkie and an avid reader,” he says. “The goal is to tell a great story and I work hard to support clients to create new ideas and compelling characters.” In return he likes to see dedication to the art from those he works with. “Keep creating,” he says. “Surround yourself with supportive smart people and maintain a positive attitude.”

“I fell in love with an actor,” says Vanessa Henneman of her journey to become an agent. She had studied law and film, excellent grounding for her new work, when she began to represent her boyfriend. “I said, ‘I know a little bit about contracts and I know a bit about movies. Let me do it.’” The Henneman Agency now has 150 clients, including actors, writers, directors, composers and a ballerina. There is a staff of nine, including former IFFR Cinemart co-ordinator Jacobine van der Vloed. Initially, Henneman represented only actors. One of the reasons for taking on writers and directors was to become involved in projects at an earlier stage. “It frustrated me that I was always at the end of the whole process,” she says. Now, she is beginning to package projects. The agency represents primarily Dutch-speaking talent. Last year, however, Henneman was one of the founding partners of the European Talent Network. This involves Team Players from Denmark and Spielkind from Germany, alongside The Henneman Agency. The idea is to provide a single point of contact for US film-makers looking to harness European talent. Henneman advises her clients to think about where they want to be in five years’ time. “All the decisions that come along the way, we mirror towards that focus — does it fit the masterplan?” So, if an actor wants to work abroad, the agency will pursue a different strategy than if an actor wants to concentrate on his or her own local territory; appearing in an arthouse movie that may play in Cannes or Toronto will give the talent far more exposure internationally than starring in a local blockbuster. 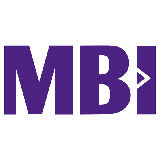