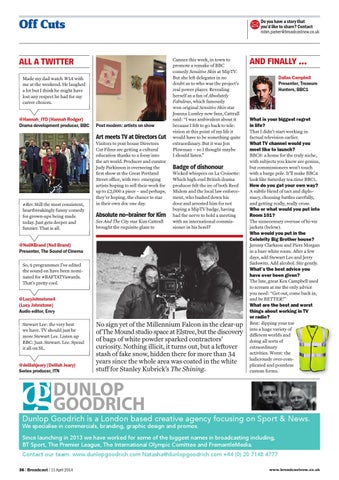 ALL A TWITTER Made my dad watch W1A with me at the weekend. He laughed a lot but I think he might have lost any respect he had for my career choices. @Hannah_IYD (Hannah Rodger) Drama development producer, BBC

#Rev. Still the most consistent, heartbreakingly funny comedy for grown-ups being made today. Just gets deeper and funnier. That is all.

Visitors to post house Directors Cut Films are getting a cultural education thanks to a foray into the art world. Producer and curator Judy Parkinson is overseeing the first show at the Great Portland Street office, with two emerging artists hoping to sell their work for up to £2,000 a piece – and perhaps, they’re hoping, the chance to star in their own doc one day.

Cannes this week, in town to promote a remake of BBC comedy Sensitive Skin at MipTV. But she left delegates in no doubt as to who was the project’s real power player. Revealing herself as a fan of Absolutely Fabulous, which famously won original Sensitive Skin star Joanna Lumley new fans, Cattrall said: “I was ambivalent about it because I felt to go back to television at this point of my life it would have to be something quite extraordinary. But it was Jon Plowman – so I thought maybe I should listen.”

Badge of dishonour Wicked whispers on La Croisette: Which high-end British drama producer felt the ire of both Reed Midem and the local law enforcement, who bashed down his door and arrested him for not buying a MipTV badge, having had the nerve to hold a meeting with an international commissioner in his hotel?

No sign yet of the Millennium Falcon in the clear-up of The Mound studio space at Elstree, but the discovery of bags of white powder sparked contractors’ curiosity. Nothing illicit, it turns out, but a leftover stash of fake snow, hidden there for more than 34 years since the whole area was coated in the white stuff for Stanley Kubrick’s The Shining.

What is your biggest regret in life? That I didn’t start working in factual television earlier. What TV channel would you most like to launch? BBC8: a home for the truly niche, with subjects you know are genius, but commissioners won’t touch with a barge pole. It’ll make BBC4 look like Saturday tea-time BBC1. How do you get your own way? A subtle blend of tact and diplomacy, choosing battles carefully, and getting really, really cross. Who or what would you put into Room 101? The unnecessary overuse of hi-viz jackets (below). Who would you put in the Celebrity Big Brother house? Jeremy Clarkson and Piers Morgan in a bare white room. After a few days, add Stewart Lee and Jerry Sadowitz. Add alcohol. Stir gently. What’s the best advice you have ever been given? The late, great Ken Campbell used to scream at me the only advice you need: “Get out, come back in, and be BETTER!” What are the best and worst things about working in TV or radio? Best: dipping your toe into a huge variety of different worlds and doing all sorts of extraordinary activities. Worst: the ludicrously over-complicated and pointless custom forms.

We inwe commercials, branding, graphic and promos. Since specialise launching in 2013 have worked for some of the biggest names in design broadcasting including,

Since launching in 2013 we have worked for some of the biggest names in broadcasting including,