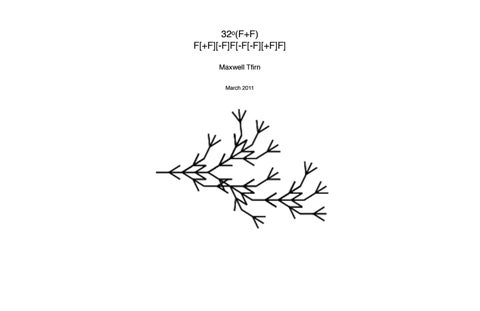 32o(F+F) F[+F][-F]F[-F[-F][+F]F] 32o(F+F)F[+F][-F]F[-F[-F][+F]F] tries to cover and stop the everyday noises that people create by talking excessively loud, listening to music players, talking on the phone, text messaging, revving their car engines, playing loud music in their cars, humming and thinking out loud. This piece hopes to exaggerate and frame a silence that seldom occurs in a big city by juxtaposing it with extreme noise. This piece is meant to be played outside for the duration of nine to ten minutes and cut off very abruptly with the hope that a moment of complete silence follows before the noise of daily life resumes. This piece uses 12 different uniquely generated forms of colored noise that can be manipulated by numerous parameters specific to the means by which each noise is generated. The twelve forms of noises use synthesis techniques ranging from the convolution of different pulse generators to interpreting video data as FFT frames. The form of the piece is derived from an L-system which is drawn at a 320 angle and starts with the axiom F+F. Using the rule F[+F][-F]F[-F[-F][+F]F], an image of a tree is produced with crossing limbs and numerous splitting branches, resulting in many complex, interweaving layers. The intersections of branches and limbs derive the form of the score. When an intersection occurs it will either activate or mute a particular noise generator. Performance Notes: This piece is meant to be played loud but not lose its musical characteristic. It is important for the performer to listen carefully in order to make sure that all of the sounds are audible. This piece requires a mixer, at least two speakers and a computer. I recommend using the Evolution UC33e Midi Control Surface because of its many sliders and knobs however other similar interfaces will work. Using an interface makes the transitions between sounds very fluid as well as manipulating the many parameters more efficient. The score is graphic and uses numbers and colors as directions. The number indicates which slider is to be moved while the color indicates on or off. Blue means make the sound audible (slide slider up) while pink means turn the sound down/off (slide slider down). The score is to be read from left to right and up to down. At the very end all sounds that are audible should be immediately turned down all at the same time to end the piece. Take a breath and listen for a moment to the sounds around you. Everyone of the twelve sounds has a slider and a filter. To use the filters push the spacebar to open up the filter screen. Each filter is labeled with a number from one to twelve, each number is associated with the sound assigned to that number and that number slider. Example of notation 4 32o(F+F)F[+F][-F]F[-F[-F][+F]F] tries to cover and stop the everyday noises that people create by talking excessively loud, listening to mus...

32o(F+F)F[+F][-F]F[-F[-F][+F]F] tries to cover and stop the everyday noises that people create by talking excessively loud, listening to mus...