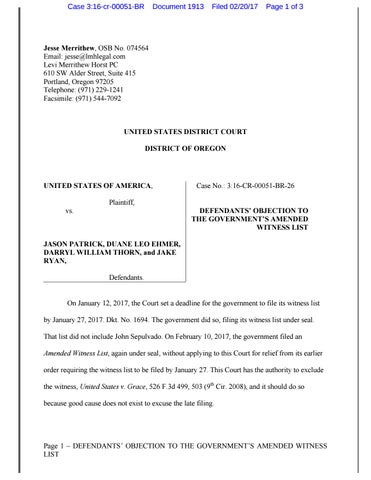 JASON PATRICK, DUANE LEO EHMER, DARRYL WILLIAM THORN, and JAKE RYAN, Defendants. On January 12, 2017, the Court set a deadline for the government to file its witness list by January 27, 2017. Dkt. No. 1694. The government did so, filing its witness list under seal. That list did not include John Sepulvado. On February 10, 2017, the government filed an Amended Witness List, again under seal, without applying to this Court for relief from its earlier order requiring the witness list to be filed by January 27. This Court has the authority to exclude the witness, United States v. Grace, 526 F.3d 499, 503 (9th Cir. 2008), and it should do so because good cause does not exist to excuse the late filing.

This Court has the authority to exclude the witness based solely on the late filing. In Grace, the Ninth Circuit held, in an en banc decision that the district courts have the

authority “consistent with Rule 16 and Rule 2 and as part of the court’s inherent authority to manage its docket” to enforce orders related to witness lists by excluding late filed additions. 526 F.3d at 513. The government’s recitation in a witness list that it reserves its right to change the witness list has no effect. Id. at 509. Excluding witnesses who were not disclosed by the deadline is not viewed as a “sanction,” but simply the court enforcing its order. Id. at 514. The Ninth Circuit further noted that, should the government seek to add or substitute witnesses, it should first seek the district court’s relief from the scheduling order. Id. II.

This Court should exclude Mr. Sepulvado’s testimony based on the late filing. As explained in the concurrently filed Declaration of Counsel, the government has been

on notice about the particular challenges of admissibility for its exhibit since at least September 27, 2016. It knew on that date that the OPB would litigate any attempt to force its former employee to testify and that the Court would not allow the exhibit in without a foundational witness. The government had five months to secure the necessary permissions, issue the subpoena, and litigate the motion to quash. During that time, the defense could have overcome the procedural barriers that currently prevent it from interviewing Mr. Bundy. The defense may have developed other witnesses through investigation to comment on Mr. Sepulvado’s personal bias against the defendants.1 Instead, the government apparently did nothing, choosing to let the deadlines pass for pretrial motions and for the filing of its witness list. The timing of the government’s disclosure that it was seeking to subpoena Mr. Sepulvado

In a public posting on Twitter, Mr. Sepulvado admitted that he was removed from covering the story because it was determined that he could not be fair and impartial to the defendants. Page 2 – DEFENDANTS’ OBJECTION TO THE GOVERNMENT’S AMENDED WITNESS LIST

strongly suggests that the government’s reason for waiting was to await the appointment and confirmation of a new attorney general. The conduct of a criminal trial should not be subject to these types of shifting political winds. The government was on notice of the challenge it faced in admitting the exhibit last September. It should not amount to ‘good cause’ if the government chose to wait for a new administration that is openly hostile to the press.

DATED this 20th day of February, 2017 By: /s Jesse Merrithew Jesse Merrithew, OSB No. 074564 Attorney for Jake Ryan On behalf of all listed defendants 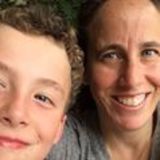