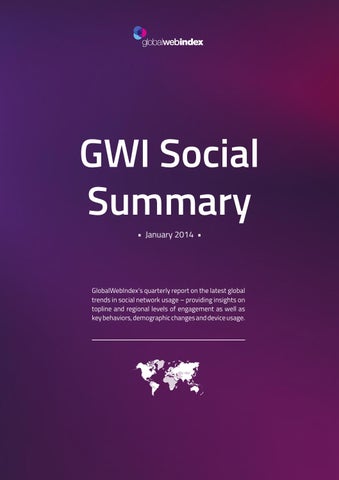 Introduction GWI Social is where GlobalWebIndex presents the very latest figures for social media adoption and usage across more than 30 global markets. Drawing on data from our Q4 2013 wave of research, released in January 2014, we provide key insights on: • The progress of social media platforms around the world, looking at account ownership, active usage and estimated audience size as a way to establish current and future momentum • Trends relevant to specific regions and countries, tracking where engagement and behaviors vary or overlap between markets • Demographic patterns and shifts, with particular attention to networking by age group • How networkers are connecting across different devices • The most popular behaviors among users, and how these are changing over time and being impacted by mobiles and tablets. In this summary, we provide the key headlines and statistics from the report. For more detailed insights, coverage and implications, please see the full version. More detailed figures can also be accessed via our pre-cut data packs available in the Insight Store.

Facebook still dominant, but other networks are rising • Facebook remains the number one social network, topping the list for account ownership (83%), active usage (49%) and visit frequency (56% of users log in more than once a day). It is also the most popular site in all regions and its users are the most likely to be carrying out a range of networking activities. • The site continues to experience declines in levels of active usage but the extent of the drop in the second half of 2013 (down 3%) has been significantly over-exaggerated in some reports; it is still hugely popular among all demographic groups and there have in fact been increases in the audience sizes for its apps. • Some of the other major players recorded small to modest increases between Q2 and Q4 – including Google+ (+6%), LinkedIn (+9%) and Twitter (+2%) – but the biggest rises in active user numbers were on newer or less-established networks. This trend was led by Instagram (+23%) and Reddit (+13%), illustrating how much more diversified and competitive the social networking landscape has become.

Question: You will now see a selection of various social media services. Please select all of the services on which you have an account and also indicate if you have used or contributed to that service in the past month using any type of device e.g. PC/Laptop, Mobile phone, tablet, etc. Source: GlobalWebIndex Q4 2013 /// Base: Global internet users aged 16-64, exc. China. 3

% change in millions of active users between Q2 and Q4 2013 Question: Which of the following services have you used or contributed to in the past month using any type of device? e.g. PC/Laptop, Mobile phone, tablet, etc Source: GlobalWebIndex Q4 2013 /// Base: Global internet users aged 16-64, exc. China.

Mobile is seeing significant growth • Networking and messaging apps experienced huge growth between Q2 and Q4. The estimated audience size for WeChat rose by 379%, with significant increases also seen for Vine (+105%), SnapChat (+54%) and WhatsApp (+35%). • Despite the overall size of the social audience via mobile still lagging somewhat behind that of PCs/laptops, mobile networkers are among the most frequent visitors and active users – a trend which is especially apparent for iOS users. • A wide range of activities undertaken on social networks are declining via PCs and laptops but increasing via mobiles – a shift which underlines the growing importance of mobile-first (or even mobile-only) audiences.

Question: Which of the following mobile / tablet applications have you used in the past month? (on any device) Source: GlobalWebIndex Q4 2013 /// Base: Global internet users with a mobile phone and/or tablet, aged 16-64, exc. China.

25-34s are the biggest age group on major networks • Although more than 50% of active users on all of the top social platforms are drawn from the 16-34 age group, it is the 25-34s – rather than the 16-24s – who form the largest share of users on nearly all of them. Many in this older group joined the platforms in question some years ago and have remained active users ever since; essentially, membership bases for some of the most well-established networks are ageing. • 16-24s are ahead only on YouTube (32%), Instagram (39%) and Tumblr (45%), with 31% of Pinterest’s active users also drawn from this age bracket. This reflects the enthusiasm with which the youngest networkers are embracing newer networks together with their slight movement away from the longer-established platforms.

ACTIVE USERS OF THE TOP 10 SOCIAL PLATFORMS, BY AGE

Question: Which of the following services have you used or contributed to in the past month using any type of device? e.g. PC/Laptop, Mobile phone, tablet, etc Source: GlobalWebIndex Q4 2013 /// Base: Global internet users aged 16-64, exc. China.

Emerging Internet Markets are the most socially engaged • At a regional level, internet users in Middle East and Africa are the most likely to be on the major social networks, indicating how enthusiastically networking has been embraced by digital audiences in this region. • Nationally, Indonesia tops the list: 97% and 83% of internet users have accounts on Facebook and Google+ respectively, with 62% and 35% being active users. This is in line with a general trend of membership and usage levels tending to be higher in emerging internet markets than in more established markets such as the US and UK. • More than a third in Indonesia, Vietnam, Thailand, Brazil, China, Mexico and India say that they use Virtual Private Networks (VPNs) to access the internet. One of the biggest motivations in China is visiting restricted sites such as Facebook (55% of VPN users), demonstrating that traditional tracking methods are failing to capture the true size of China’s social audience on many major networks (for more on this, see White Paper dedicated to audience measurement).

Question: Which of the following services have you used or contributed to in the past month using any type of device? e.g. PC/Laptop, Mobile phone, tablet, etc Source: GlobalWebIndex Q4 2013 /// Base: Global internet users aged 16-64, exc. China. 7 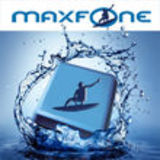