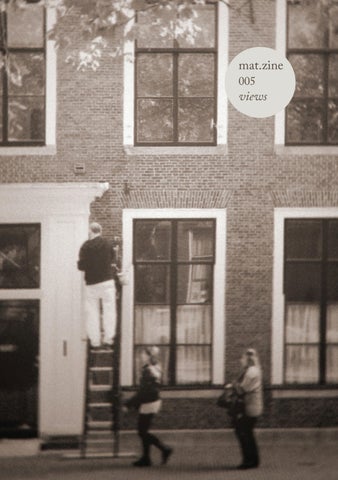 Dear Reader, mat.zine is a conduit for collaborative practice, and welcomes submissions from anybody who is interested. The editorship changes with each edition, as does the theme. The theme for this edition, which framed the included artistic, philosophical and poetical exploits, was a single word; views. The group originally involved in mat.zine has now disbanded and ventured to diďŹ&#x20AC;erent regions of our shrinking terra ďŹ rma, as indeed has the greater cohort of Dundee School of Architecture class of 2010. Most have before us new cities and towns, landscapes and vistas, or at least new awareness of the places we already know most intimately. The choice of media, method and motives were yours to each decide. Photography, writing and drawing were the obvious ones. All the editor asked is that you each responded in some way to the word; seriously, profoundly, even ironically. The results are as varied as they are mysterious - see what you think. Yours, in optimism, The Editor

All work ÂŠ the contributors. Please respect their work and reproduce and distribute this publication, electronically and in print wherever possible. Spread the word.

a glimpse of reality, a moment of chance, an urban carpet, a great fall, a surface to catch

The bird with two eyes A tale of limbo Another Monday morning, another twenty reasons not quite compelling enough to fully rouse, yet just one force of instinct overpowering enough to move and start the day to a silent applause. Hogan bursts through a groggy ﬁlm into the burning light of outside and with a sudden grasp of unnecessary urgency, swoops downwards. Eyes locked on the treasure as grease blissfully glistening in the sun, an excited squawk irresistibly leaks out into the damp air upon approaching last night’s late night accident. The image ﬂickers as if lit by a neglected light bulb swinging in some forgotten corner and as Hogan opens his jaw to collect the prize, his beak splinters into the shiny, blank tarmac. Damn. A pain in the chest squeezes tightly as another crack appears inside. For a tale of Hogan’s everyday life is a heartbreaking tale of dichotomy, the suﬀerer of a curious condition of the urban brain by the name of Matischism, aﬀectionately coined ‘two views’. For with the left eye, Hogan observes reality, as objective and comparable as can be, with the right however, he sees fantasy and most particularly, his very own fantasies, ingrained with a lifetime of intimately clicking synapses. Consequently, the matischist’s vision entails a patchwork quilt crafted from observations, memories, ambitions, emotions, achievements, productions... The boundaries between the two views are almost invisible, stitched neatly into a uniquely collaged panorama. Sparse research reveals that this anomaly is only found in those species dwelling at the heart of chaotic metropolises, attributed to lifelong nesting within the dense pollution that clings indiscriminately to every surface, forging certain cerebral connections vulnerable to the electric signals which relentlessly twitch through saturated air.

One main positive symptom of the condition is a beautifully hyperactive imagination so potent it could drum up the throb of pulsing blood as greatly as full ﬂapping ﬂight. Hogan holds the ability to experience exulting emotions of achievement without actually achieving anything. Unfortunately for him and many other matischists, he has found himself unable to avoid addiction to the right eye and its fanciful world, convincingly held together by the rigidity of reality and tugged into tangibility by the laws of mechanics. New worlds are given logical appearance following conventional rules, yet ﬁlled entirely with greedy desires, embracing thrill in the unfamiliar and temporary. Alas, moments of lucidity highlight the trap of a helpless passion; the introspective world though totally controlled and carefully pieced together by its owner appears utterly apathetic to the bystander. With a sigh, Hogan diligently closes his right eye, focussing on the primeval task in hand before retreating back, belly full, to that troublesome nest, where this time he indulgently seals the left eye and withdraws into ecstatic fantasy, darting weightlessly through fresh air. That boring familiar vista neatly unfolded out ahead for all to see rips like taut canvas as another world slightly askew ploughs through, an elegant machine; the new fabric ﬂuidly ﬁlls in the gaps and repairs the tears, an irresistible dreamland. Imagination is no longer constrained by context as static and solid, grid references of information morph into a sea of ever changing relationships.

Function over Flash All is ﬂux nothing stays still - Heraclitus

As we sit in silence, whether we are contemplating the complexities of our universe or daydreaming of the beach, we feel still. But should we? As we sit we hurtle through space revolving on an axis rotating around a distant sun, which in turn is orbiting our galaxy, one of many, in an ever expanding universe. We may feel still but still is relative, our hearts beat and our veins course. Our body is in constant renewal as old cells die and new ones are created. As we sit and ponder on how still we may or may not be, we age. Our bodies are on a path to ultimate destruction. This law of constant ﬂux, which the universe seems happy to abide by, is not only applicable to the human. The universe, happily we presume, applies this law to everything, including architecture. This may not seem the case. The modern movement was a drive towards purity, purity of thought, purity of space, purity of life. To ﬁnd purity was to exercise unbending control, whether it be; light, heat, decay or function. As the modern movement died the principle of architecture of absolute control did not. Sharp edges, smooth glossy ﬁnishes and ageless sculptural beauty are the design tools of the 21st century. In essence it is the image of architecture which we design, not the ediﬁces themselves. I propose we relinquish control. Our creations, if they exist long enough, should engage with ﬂux. It is my belief that it is not the form, or the colour of our natural environment, which we

feel attracted to or ďŹ nd beautiful, it is its ability to engage with time. The oak tree may pleasing to look at, but the real beauty is; we can observe its ability to adapt to its environment; its growth from a sapling to a mature oak or the changing colour of its leaves in Autumn, and the new buds in spring. Even our solid mountains are being slowly worn away, as new ones are created. Whilst Neil and I designed the causeway to spike island, we had many opportunities to choose design options which would satisfy our web spaces need for the pornglossy image. We resisted, choosing materials and forms which suited function over ďŹ&#x201A;ash. Our dull boring design comes from hours and hours of putting ourselves in the place of the lone traveller on his quest for the new horizon.

iâ&#x20AC;&#x2122;m interested in an ever-reducing system of representation. i wonder if we ever witness a thing directly; to achieve a true view; a direct involvement with a thing; with no middle-man translation process, inevitably branding and bending a thing; assimilating, then r/ejecting

a pure view of something requires no conduit, and no interpretation

A Connemara Fractal (After Tim Robinson) 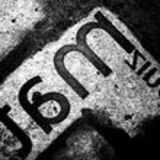 a zine, a conduit for collaborative adventures in writing, photography and drawing

a zine, a conduit for collaborative adventures in writing, photography and drawing