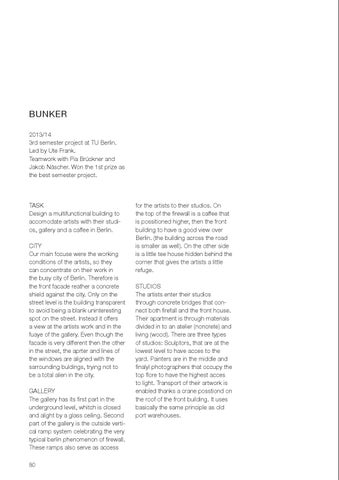 TASK Design a multifunctional building to accomodate artists with their studios, gallery and a caffee in Berlin. CITY Our main focuse were the working conditions of the artists, so they can concentrate on their work in the busy city of Berlin. Therefore is the front facade reather a concrete shield against the city. Only on the street level is the building transparent to avoid being a blank uninteresting spot on the street. Instead it offers a view at the artists work and in the fuaye of the gallery. Even though the facade is very different then the other in the street, the aprter and lines of the windows are aligned with the sarrounding buldings, trying not to be a total alien in the city. GALLERY The gallery has its first part in the underground level, whitch is closed and alight by a glass ceiling. Second part of the gallery is the outside vertical ramp system celebrating the very typical berlin phenomenon of firewall. These ramps also serve as access 80

for the artists to their studios. On the top of the firewall is a caffee that is possitioned higher, then the front building to have a good view over Berlin. (the building across the road is smaller as well). On the other side is a little tee house hidden behind the corner that gives the artists a little refuge. STUDIOS The artists enter their studios through concrete bridges that connect both firefall and the front house. Their apartment is through materials divided in to an atelier (noncrete) and living (wood). There are three types of studios: Sculptors, that are at the lowest level to have acces to the yard. Painters are in the middle and finalyl photographers that occupy the top flore to have the highest acces to light. Transport of their artwork is enabled thanks a crane posstiond on the roof of the front building. It uses basically the same principle as old port warehouses.