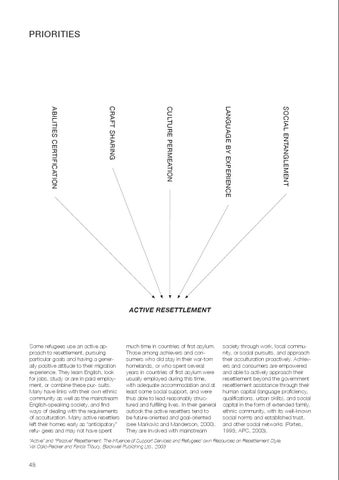 Some refugees use an active approach to resettlement, pursuing particular goals and having a generally positive attitude to their migration experience. They learn English, look for jobs, study or are in paid employment, or combine these pur- suits. Many have links with their own ethnic community as well as the mainstream English-speaking society, and find ways of dealing with the requirements of acculturation. Many active resettlers left their homes early as “anticipatory” refu- gees and may not have spent

much time in countries of first asylum. Those among achievers and consumers who did stay in their war-torn homelands, or who spent several years in countries of first asylum were usually employed during this time, with adequate accommodation and at least some social support, and were thus able to lead reasonably structured and fulfilling lives. In their general outlook the active resettlers tend to be future-oriented and goal-oriented (see Markovic and Manderson, 2000). They are involved with mainstream

society through work, local community, or social pursuits, and approach their acculturation proactively. Achievers and consumers are empowered and able to actively approach their resettlement beyond the government resettlement assistance through their human capital (language proficiency, qualifications, urban skills), and social capital in the form of extended family, ethnic community, with its well-known social norms and established trust, and other social networks (Portes, 1995; APC, 2003).