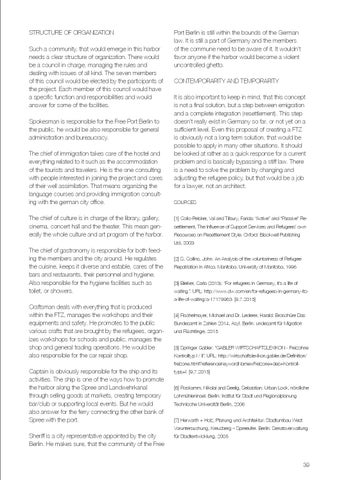 STRUCTURE OF ORGANIZATION Such a community, that would emerge in this harbor needs a clear structure of organization. There would be a council in charge, managing the rules and dealing with issues of all kind. The seven members of this council would be elected by the participants of the project. Each member of this council would have a specific function and responsibilities and would answer for some of the facilities. Spokesman is responsible for the Free Port Berlin to the public, he would be also responsible for general administration and bureaucracy. The chief of immigration takes care of the hostel and everything related to it such as the accommodation of the tourists and travelers. He is the one consulting with people interested in joining the project and cares of their well assimilation. That means organizing the language courses and providing immigration consulting with the german city office. The chief of culture is in charge of the library, gallery, cinema, concert hall and the theater. This mean generally the whole culture and art program of the harbor. The chief of gastronomy is responsible for both feeding the members and the city around. He regulates the cuisine, keeps it diverse and eatable, cares of the bars and restaurants, their personnel and hygiene. Also responsible for the hygiene facilities such as toilet, or showers. Craftsman deals with everything that is produced within the FTZ, manages the workshops and their equipments and safety. He promotes to the public various crafts that are brought by the refugees, organizes workshops for schools and public, manages the shop and general trading operations. He would be also responsible for the car repair shop. Captain is obviously responsible for the ship and its activities. The ship is one of the ways how to promote the harbor along the Spree and Landwehrkanal through selling goods at markets, creating temporary bar/club or supporting local events. But he would also answer for the ferry connecting the other bank of Spree with the port. Sheriff is a city representative appointed by the city Berlin. He makes sure, that the community of the Free

Port Berlin is still within the bounds of the German law. It is still a part of Germany and the members of the commune need to be aware of it. It wouldn’t favor anyone if the harbor would become a violent uncontrolled ghetto. CONTEMPORARITY AND TEMPORARITY It is also important to keep in mind, that this concept is not a final solution, but a step between emigration and a complete integration (resettlement). This step doesn’t really exist in Germany so far, or not yet on a sufficient level. Even this proposal of creating a FTZ is obviously not a long term solution, that would be possible to apply in many other situations. It should be looked at rather as a quick response for a current problem and is basically bypassing a stiff law. There is a need to solve the problem by changing and adjusting the refugee policy, but that would be a job for a lawyer, not an architect. SOURCES [1] Colic-Peisker, Val and Tilbury, Farida: “Active” and “Passive” Resettlement, The Influence of Support Services and Refugees’ own Resources on Resettlement Style. Oxford: Blackwell Publishing Ltd, 2003 [2] S. Collins, John: An Analysis of the voluntariness of Refugee Repatriation in Africa. Manitoba: University of Manitoba, 1996 [3] Bleiker, Carla (2013): “For refugees in Germany, it’s a life of waiting.”. URL: http://www.dw.com/en/for-refugees-in-germany-itsa-life-of-waiting/a-17179963 [9.7.2015] [4] Fischelmayer, Michael and Dr. Lederer, Harald: Broschüre Das Bundesamt in Zahlen 2014, Asyl. Berlin: undesamt für Migration und Flüchtlinge, 2015 [5] Springer Gabler: “GABLER WIRTSCHAFTSLEXIKON - Freizohne Kontrolltyp I / II”. URL: http://wirtschaftslexikon.gabler.de/Definition/ freizone.html?referenceKeywordName=Freizone+des+Kontrolltyps+I [9.7.2015] [6] Roskamm, Nikolai and Seelig, Sebastian: Urban Lock, nördliche Lohmühleninsel. Berlin: Institut für Stadt und Regionalplanung Technische Universität Berlin, 2006 [7] Herwarth + Holz, Planung und Architektur: Stadtumbau West Voruntersuchung, Kreuzberg – Spreeufer. Berlin: Senatsverwaltung für Stadtentwicklung, 2005