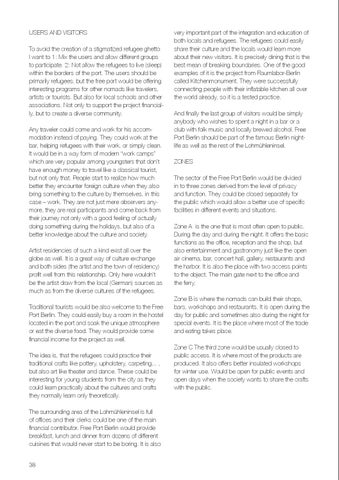 USERS AND VISITORS To avoid the creation of a stigmatized refugee ghetto I want to 1: Mix the users and allow different groups to participate. 2: Not allow the refugees to live (sleep) within the borders of the port. The users should be primarily refugees, but the free port would be offering interesting programs for other nomads like travelers, artists or tourists. But also for local schools and other associations. Not only to support the project financially, but to create a diverse community. Any traveler could come and work for his accommodation instead of paying. They could work at the bar, helping refugees with their work, or simply clean. It would be in a way form of modern “work camps” which are very popular among youngsters that don’t have enough money to travel like a classical tourist, but not only that. People start to realize how much better they encounter foreign culture when they also bring something to the culture by themselves, in this case – work. They are not just mere observers anymore, they are real participants and come back from their journey not only with a good feeling of actually doing something during the holidays, but also of a better knowledge about the culture and society. Artist residencies of such a kind exist all over the globe as well. It is a great way of culture exchange and both sides (the artist and the town of residency) profit well from this relationship. Only here wouldn’t be the artist draw from the local (German) sources as much as from the diverse cultures of the refugees. Traditional tourists would be also welcome to the Free Port Berlin. They could easily buy a room in the hostel located in the port and soak the unique atmosphere or eat the diverse food. They would provide some financial income for the project as well. The idea is, that the refugees could practice their traditional crafts like pottery, upholstery, carpeting,.. , but also art like theater and dance. These could be interesting for young students from the city as they could learn practically about the cultures and crafts they normally learn only theoretically. The surrounding area of the Lohmühleninsel is full of offices and their clerks could be one of the main financial contributor. Free Port Berlin would provide breakfast, lunch and dinner from dozens of different cuisines that would never start to be boring. It is also 38

very important part of the integration and education of both locals and refugees. The refugees could easily share their culture and the locals would learn more about their new visitors. It is precisely dining that is the best mean of breaking boundaries. One of the good examples of it is the project from Raumlabor-Berlin called Kitchenmonument. They were successfully connecting people with their inflatable kitchen all over the world already, so it is a tested practice. And finally the last group of visitors would be simply anybody who wishes to spent a night in a bar or a club with folk music and locally brewed alcohol. Free Port Berlin should be part of the famous Berlin nightlife as well as the rest of the Lohmühleninsel. ZONES The sector of the Free Port Berlin would be divided in to three zones derived from the level of privacy and function. They could be closed separately for the public which would allow a better use of specific facilities in different events and situations. Zone A is the one that is most often open to public. During the day and during the night. It offers the basic functions as the office, reception and the shop, but also entertainment and gastronomy just like the open air cinema, bar, concert hall, gallery, restaurants and the harbor. It is also the place with two access points to the object. The main gate next to the office and the ferry. Zone B is where the nomads can build their shops, bars, workshops and restaurants. It is open during the day for public and sometimes also during the night for special events. It is the place where most of the trade and eating takes place. Zone C The third zone would be usually closed to public access. It is where most of the products are produced. It also offers better insulated workshops for winter use. Would be open for public events and open days when the society wants to share the crafts with the public.